The difference between cerebrum and cerebellum is mainly due to the following properties like size, constitution to brain and location. They both contribute to the human brain or central nervous system and plays an integral role in our everyday life. The size of the cerebrum is the largest part of the brain, while cerebellum is much smaller or the second largest part of the brain.

Cerebrum and cerebellum are the two major parts of the brain, which remain isolated through dura matter and communicate through the brain stem. Here, you will get to know a detailed comparison of the topic through the comparison chart, and the key differences explained in this article. Also, the definition and the structural components of the cerebrum and cerebellum are discussed. 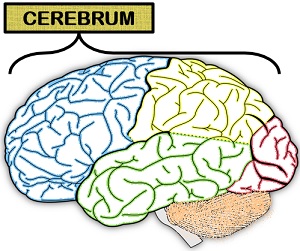 It can define as the second largest part of the brain, which only constitutes 11% of the total brain. Like the cerebrum, the cerebellum also comprises two hemispheres and consists of outer grey matter and inner white matter. The cerebellum contains 50% of the brain’s neuron and specialized cells. It is located on the back of the brain.

Each cerebellum hemisphere consists of three lobes, namely anterior, posterior and flocculonodular lobe. Previously, the cerebellum was considered a motor structure because of its function in motor learning, cognitive functions, maintenance of balance and posture etc. 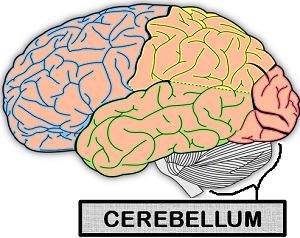 Cerebral is a part of forebrain found in the upper cranial cavity of the brain. It consists of the following structural elements: 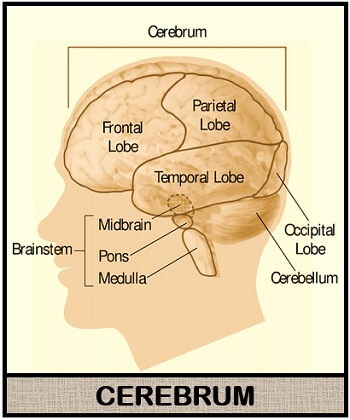 The nerve fibres in the white matter carry signals between the nerve cells and the other parts of the brain and body. Each cerebral hemisphere consists of four lobes like frontal, parietal, occipital and temporal lobe that perform the following functions mentioned in the table given below.

Cerebral cortex: It is a highly grooved region. It is the structural element of the cerebrum that increases the surface area of the brain. Inside cerebrum, there is a bulk of “Neocortex”. The neocortex is a six-layered structure of cerebral cortex that participates in higher information processing.

Sulcus: Central sulcus exists as a deep groove that isolates the frontal lobe from the parietal lobe.

Cerebellum possesses two hemispheres like cerebrum. It appears as a highly folded structure present underneath the occipital and temporal lobe of the cerebrum. Cerebellum is present below the dense mass of the cerebral cortex. It is present posterior to pons and above the brain stem. So, the cerebellum is the part of “Rhombencephalon region” which is also called “Hindbrain”.

Cerebellum hemisphere: Cerebellum develops after the metencephalon division, and it becomes separated by the four lobes of the cerebrum via “Tentorium cerebelli”. “Vermis” is the midline area that allows communication between the two cerebellum hemisphere. Like the cerebrum, it also contains grey as well as white matter. Anterior, posterior and flocculonodular lobe are the three lobes found in the cerebellum. “Primary fissure” and “Posterolateral fissure” separates the anterior, posterior and flocculonodular lobe.

The cerebellum plays a fundamental role in motor functioning where a brain is giving signals to rest of the body parts to carry out a particular task, due to which it is also called “Little brain”.

Key Differences Between Cerebrum and Cerebellum

Both cerebrum and cerebellum are the two structures of the central nervous system. The cerebrum controls the thinking related processes (like reasoning, learning, planning, judging), emotions or impulse control, visual memory, verbal memory, and interprets the sensory information. Cerebellum monitors the coordination in muscle movement. Therefore, cerebrum and cerebellum are the two different structures that complement each other in a way and coordinate to help us perform tasks and memorize things.