Do you know the examples of adsorption? Adsorption is a common term that we must have heard many times. In adsorption, gas or solute particles adhere to the surface interface of the solid or liquid matrix. So, it is a surface phenomenon that works opposite the absorption mechanism.

The gas or solute molecules that adhere to the surface of any matrix are called adsorbates. In contrast, the adsorbent is a solid or liquid matrix upon which the gas or solute particles stick.

Adsorption is a surface phenomenon in which adsorbates remain at the surface of the adsorbent. Or, we can say that adsorbates do not penetrate into the bulk.

Adsorptive molecules are at the stage before being adsorbed on the surface.
Adsorbate is the accumulated end product.
Adsorbent is the material used as an adsorption medium.

The molecules or atoms interacting with the adsorbent surface have residual surface energy. The energy generates due to the unbalanced forces that attract the molecules to stick onto the surface.

Based on the Adsorption Forces: Physisorption and Chemisorption are the two types of adsorption.

Physical or chemical bonds hold the adsorbates on the adsorbent medium, releasing heat from the surface. So, adsorption is an exothermic reaction, i.e. ΔH is always negative.

The rate of the process depends largely on surface area and temperature.

Adsorption of a Gas by Activated Charcoal

A piece of activated charcoal can adsorb gases like ammonia, oxygen, hydrogen, chlorine and others. So, charcoal acts as an adsorbent while gas molecules act as adsorbates.

You can perform one experiment by enclosing one of these gases in a closed vessel containing powdered charcoal. After some time, you will notice a decrease in the pressure of the gas inside the vessel. It is because the gas molecules adhere to the surface of the charcoal. 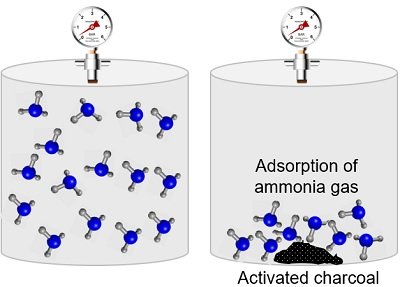 Adsorption of Ink on Chalk

Take any staining reagent or ink in a beaker and dip a chalk stick into that. Later, you will observe that the surface of the chalk stick will adsorb all the coloured molecules in ink. You will find a chalk white from inside if you break the chalk.

So, ink adsorption on chalk is a physisorption process in which the pigments adsorb on the chalk surface. One thing you should remember is that the solvent of ink absorbs inside the chalk.

Take sugarcane juice in a glass. After that, add one tablespoon of animal charcoal to the sugarcane solution and stir it well. Then, you will obtain a clear sugar solution by filtering the previous sample.

It occurs because animal charcoal acts as a decolorizing agent, allowing sugar to achieve its desirable white colour by adsorbing all the impurities and colouring matter of the sugarcane juice. 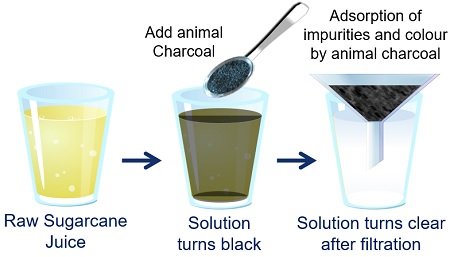 The silica gel is a highly porous material with millions of voids and a surface area of around 800m2/g. It has a powerful adsorbing capacity for moisture or water vapours at a temperature near or higher than 40 degrees Celsius.

Silica gel is generally available as a solid, beaded or crystallized form of sodium silicate. The air becomes dry in the presence of silica gel because its tiny pores can adsorb and hold moisture.

The water vapours adhere to the surface of the silica gel, as seen in the above image. You must have seen the beaded silica gel in a small paper packet. Being a desiccant, it controls local humidity to prevent deterioration of some goods.

The adsorbent reacts multiple times with the oxygen to prevent the wearers from inhaling toxic gases like Co, CH4, etc. and air particulates. The air that passes the adsorbent is pure and safe to breathe. Thus, gas masks are good for purifying the air for breathing. 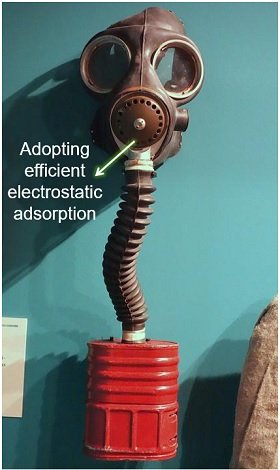 Do you ever wonder how the paint sticks to the surface of the wall? Well, this is also due to adsorption. Paint industries employ adsorption techniques to remove the dissolved gases in the paint. Removal of dissolved gases is a must; otherwise, paints will not adhere properly to the walls. 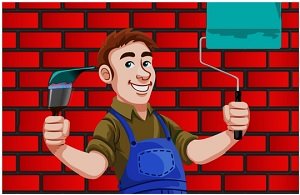 Activated carbon filtration is a standard method in water treatment. It is designed to adsorb contaminants dissolved in water by pulling out or trapping them onto the surface of a filter. 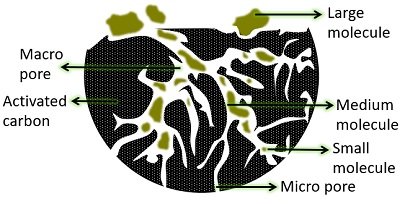 Thus, the adsorption phenomenon has a significant role in daily life, as it is largely used to remove undesirable colouring matter and impurities from various resources that we breathe and consume.