Neurons are the fundamental components of the nervous system that perform a specific task by receiving, conducting, and transmitting the signal or action potential to the other parts of the body.

An electrical signal produced by the neurons is called a Nerve impulse that propagates via continuous and saltatory conduction. The term neuron is sometimes interchangeable with the term nerve-cell and nerve-fibre.

A neuron includes three functional elements like a cell-body, dendrite and an axon. Its size and shape may vary in different species. This post discusses the definition, important facts, parts, types and functions of the functions.

Neurons refer to the morphologically and functionally distinct nerve fibres, which have root-like dendrites (receive a signal), irregular cell body (conducts the signal), and axons or the specialized projections (process and transmit a signal via synapse from one cell to the other).

Despite being unique from the other cells, it shares some common features like the presence of cell membrane, cell-nucleus, cell-organelles etc. Neurons merely refer to the excitable cells, which can respond to the stimulus by generating a nerve impulse or action potential.

Soma or cell body measures 10-25 mm in diameter. Cell body functions as a “Core of neuron” that provides energy to generate a nerve impulse and structural integrity. It carries genetic information inside the nucleus. A nucleus is encircled by a membrane, and it contains nucleolus that helps in ribosomal synthesis or mediates protein translation.

A cell body is quite irregular in appearance. It comprises cell organelles like endoplasmic-reticulum, Golgi body, and mitochondria that facilitate the release of protein precursors, packaging of proteins and produce energy to fuel the cellular activities, respectively.

It may receive multiple signals through its dendritic tree, which can be one of the two (excitatory or inhibitory) signals. Dendrites possess ribosomes but lack a myelin insulating layer. The number of dendrites per neuron can be many.

It seems like a tubular, long, and filamentous structure, which protrudes outward from the cell body. Like dendrites, axons also form branches towards an end and make up an axon terminal. The axon endings give rise to a structure known as “Bulbous swelling”.

An axon terminal contains synaptic vesicles, which produce neurotransmitters to excite the adjacent neurons. It lacks ribosomes but contains a myelin insulating membrane.

A neuron constitutes a single axon whose length and diameter varies from species to species. The function of the axon is to conduct signals from the axon terminal to the target cells. An axon possesses the following specialized regions:

The neurons are categorised into the following kinds based on the number of extensions from the cell body and functional role. 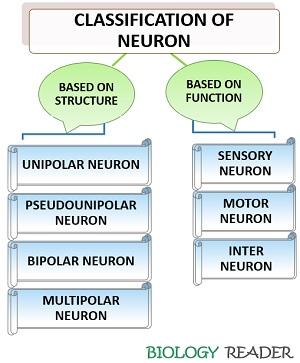 Based on the Number of Extensions

Unipolar: It has a single extension that originated from the cell body, also called neurite. Unipolar kind of neuron is only found in invertebrates, commonly in insects. It is electrically inactive.

Pseudounipolar: It also consists of a single extension, which bifurcates into two individual branches. One branch extends into the direction of the peripheral nervous system, and the other into the direction of the central nervous system. Pseudounipolar neurons are generally sensory or afferent neurons, which pass signals from the peripheral system to the CNS.
Example: Dorsal root ganglion neuron.

Bipolar: In this kind, a cell body contains two extensions, one axon and one dendrite. They are the specialized sensory neurons responsible for the transmission of sensations.
Example: Retinal and olfactory epithelium cells.

Multipolar: It constitutes majorly in the central nervous system and comprises motor neurons and interleukins.
Example: Motor and interneurons are of a multipolar type. 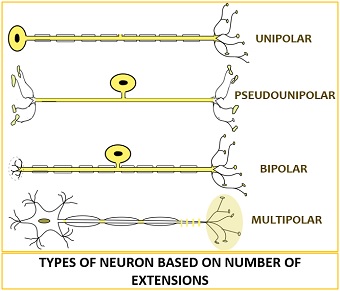 Sensory neurons are the pseudounipolar neurons whose function is to convey the message about the things going in our surrounding to the sensory receptors of the central nervous system like the brain and spinal cord.

Interneurons are the “Relay neurons” that serve as neutral intermediaries. Interneurons associate with the other neurons to transfer the action potential between the sensory and motor neurons.

Motor neurons are the multipolar neurons whose function is to convey a message from the CNS through the interneurons to the peripheral effector cells like muscle, gland and organs.

Thus, their primary purpose is to conduct the signal from CNS to the skeletal and smooth muscles. Motor neurons are the efferent or exiting nerve fibres, which take multiple signals from the central nervous system and deliver them to the peripheral effector cells. Motor neurons are basically of two types: 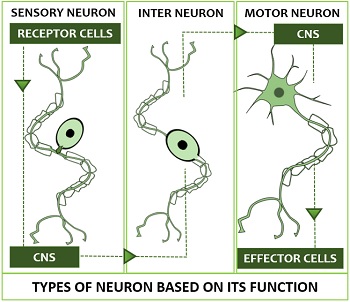 Neurons or nerve fibres are specialized for processing and transmitting cellular signals, coordination between the cells performing different cellular activities, etc. In the structure of a neuron, all the components play a distinct role: 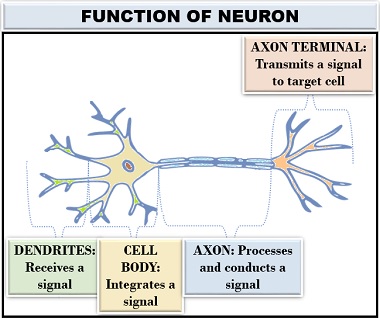