As the system absorbs free energy from the surrounding, the standard change in the free energy for an endergonic reaction will always be positive or greater than zero.

It is a reverse of an exergonic reaction, in which the energy is released, not absorbed. The terms endergonic and endothermic are sometimes confusing, but they differ in a certain way.

We can predict the spontaneity of the endergonic and endothermic reactions. Spontaneity is the direction of the reaction, like whether the reaction could proceed on its own or need external energy.

Endergonic reactions need a steady supply of energy. In contrast, exothermic processes involve heat supply to the system, not energy. This post discusses the definition, characteristics and examples of endergonic reactions.

The energy input drives the reaction forward. The new chemical bonds formed in the products are weaker than the bonds broken in the reactants. The equation for an endergonic reaction is given below.

The figure below shows a common graphical representation of an endergonic reaction. Y-axis indicates the free energy, and the X-axis represents the progress of a reaction. 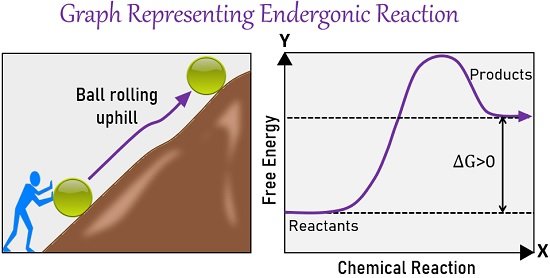 This type of relationship between energy and reaction progress is called a reaction coordinate graph. The left side of the graph shows an example where the ball is rolling uphill.

You can compare the graph with the given diagrammatic illustration. It’s obvious that pushing the ball uphill requires more energy than pushing it downhill. So, the extra strength we need to push the ball uphill relates to the extra energy required in the endergonic process.

Thus, reactions that are nonspontaneous or need energy-driving force are called endergonic reactions. An equation for Gibbs’s free energy is given below.

The sign of ΔG indicates the direction and spontaneity of a chemical reaction. In the case of an endergonic reaction, ΔG is greater than 0 or positive because energy is absorbed.

It includes some cellular processes that need ATP and endothermic reactions that primarily need light energy.

Cellular Works: Condensation of ADP plus Pi is an endergonic reaction. This reaction leads to the synthesis of ATP. The cells absorb the energy released through aerobic respiration, mostly “ATP”, to perform cellular tasks.

Exothermic reactions are nonspontaneous and require heat energy to undergo any physical or chemical change. Its common example is photosynthesis.

ATP hydrolysis is necessary for muscle contraction and the transport of proteins and vesicles. Both are mechanical works done by the body cells.

The motor proteins move along the animal cell’s cytoskeleton. Thousands of motor proteins work together to move our muscles by breaking one molecule of ATP with every step. They drive the active transport of proteins and vesicles in the cytoplasm. 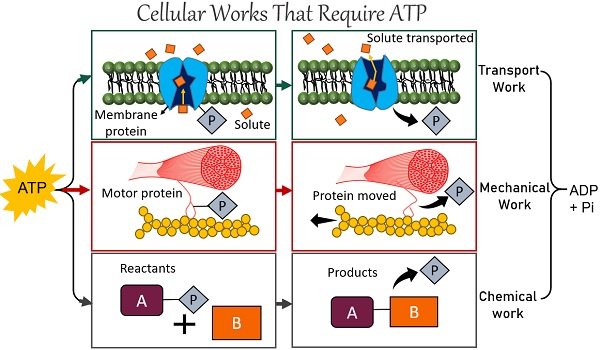 Cells use cellular energy like ATP to pump solutes or ions against their concentration gradient. The molecules move through protein pumps embedded in the selectively permeable membrane.

Let’s take an example of a Na+/K+ Pump to understand how ATP powers the cellular transport systems. Sodium-potassium pump maintains the concentration gradient of Na+ and K+ across the cell membrane using ATP. 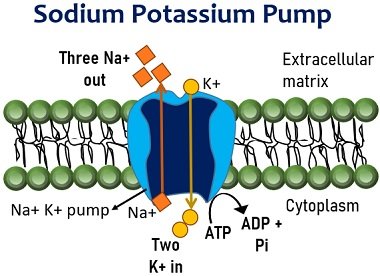 It allows the exchange of sodium ions outside and potassium ions inside the cell. Na+ and K+ pump has three binding sites for sodium and two for potassium. Three Na+ ions bind to their respective sites, and cells hydrolyze ATP to ADP and Pi.

The released terminal phosphate from ATP has high energy, which binds to the protein pump. It changes the conformation of the Na+ and K+ pump by opening the channel outwards the cell and releasing Na+ ions.

Then, two K+ ions from the extracellular matrix bind to their respective sites of the protein pump. It triggers the removal of the phosphate group and brings a conformational change in the pump.

Nucleotide units join via covalent bonds. The phosphate group of one nucleotide and the third carbon atom of pentose sugar joins covalently.

As we know, energy is required to create large molecules. Likewise, the polymerization of nucleotides also requires energy, which they get from themselves. 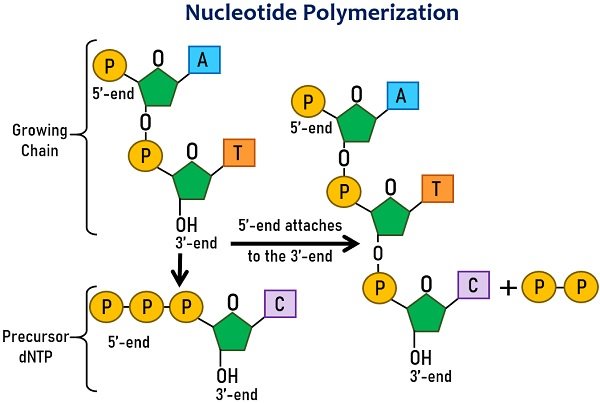 A polymerase enzyme forms a polynucleotide chain by adding nucleotides to the growing chain. It is a high-energy-requiring process in which the free energy change is highly positive.

It is a common example of an endothermic reaction because it requires light energy. Photosynthesis is carried out by plants and other photosynthetic microorganisms.

During light reactions, thylakoids within the chloroplast absorb photons of solar light. They oxidize water into oxygen by giving ATP and NADPH.

Later, plants absorb energy molecules (ATP and NADHP) from the light reaction to synthesize sugars or food for themselves. This reaction is light-independent, also referred to as Calvin’s cycle. The CO2 reduces into organic carbon, i.e. sugar or glucose, through successive stages of Calvin’s cycle.

Plants use sugars as their primary food for cell growth and development. All the living organisms on this earth need oxygen to breathe. Not only oceans but also trees and plants produce a significant amount of oxygen for us to breathe.