It is the first phase of photosynthesis, where a plant derives cellular energy, i.e. ATP and NADPH, from the light energy, i.e. sunlight. The photochemical phase or light reaction is a stage that involves the oxidation of a single water molecule into half oxygen molecule.

Therefore, the splitting of two water molecules will result in releasing one oxygen molecule. Oxidation of water releases ATP and NADPH, which provides cellular energy to the plant cells to prepare food for themselves.

It occurs during the daytime or in the presence of sunlight. For the reconstruction of light energy, a light reaction includes two photosystems, namely PS-I and PS-II. 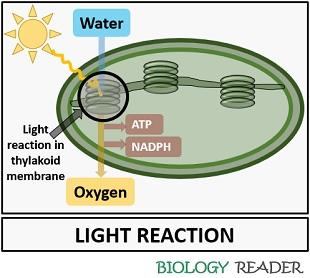 It is the second phase of photosynthesis, where a plant exploits the cellular energy (ATP and NADPH) released from the light reaction to produce chemical energy by synthesizing sugars.

The biosynthetic phase reduces six CO2 molecules and twelve H2 molecules from the NADPH into a single glucose (C6H12O6) molecule. 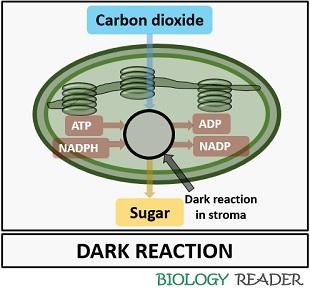 The hydrolysis of ATP and NADPH releases ADP and NADP. It occurs in the absence of sunlight. A location of the light-independent reaction is inside the aqueous stroma of the photosynthetic apparatus (Chloroplast). It generally involves the following steps:

Therefore, we can conclude that both photochemical and biosynthetic phase share many differences, but they collectively accomplish the process of photosynthesis. They follow a cyclic pathway, where both the light and chemical energy are continuously used and released.

1 thought on “Difference Between Light Reaction and Dark Reaction”