Activated sludge treatment can define as a conventional method, which can separate the solid wastes, suspended organic matter, soluble matter and parasites. It is a biological system that makes the use of living bacterial flocs to degrade the organic matter of the sewage and industrial waste in aerated bioreactors.

Activated sludge treatment involves a series of stages, which firstly separates the raw or primary sludge, then separates the waste activated sludge and finally involves disinfection and clarification of the effluent. Therefore, it contributes a significant role in the control of water pollution by eliminating the undesired chemicals, particulate matter and parasites from the sewage and industrial waste.

Activated sludge treatment can define as the wastewater treatment plant, which eliminates the particulate matter like sand, unwanted inorganic and organic wastes and harmful microorganisms from the sewage waste. The process is followed by the primary, secondary and tertiary treatment methods.

While studying the activated sludge treatment, we must have an idea of the terms given below:

It can define as the accumulation of invaluable physical, biological and chemical waste, which alters the appearance and potability of the water. Ground water generally gets polluted when it flows through water channels, while the surface water gets contaminated by waste released from the various kind of establishments.

It includes chemical wastes (like heavy metals, VOCs), physical wastes (like vegetable remainings, sand, gravel etc.) and biological waste (such as coliform bacteria in the human and animal’s faeces). Water pollutants change the water quality or make it undesirable or unpotable for human consumption.

It can define as waste formed in the secondary treatment by the oxidation of organic matter by the bacterial flocs under aerated condition. The coarse particles, colloids, suspended or dissolved matter etc. deposits at the bottom of the aeration basin is termed as sludge. This sludge contains active biomass of aerobic microbes like bacteria, fungi, protozoans etc. that decompose the waste into activated sludge under aerated condition.

It is a physical process facilitating the solid-liquid separation based on the size and density of the particles suspended in the solution—the coarse particles deposits at the bottom as sediment out of fluid via gravitational force. In the case of wastewater treatment, the sediment is called sludge.

This method facilitates the clumping of particles suspended in a liquid, which generally appears as flocs that settle down towards the base of chamber or reactor. In simple words, it is the aggregation of small colloids towards the bottom out os liquid mixture by the use of flocculating agents.

It is a process of removing organic and inorganic waste via active biomass of microorganisms, which cause decomposition of the organic matter into a simpler form. In this, the products formed after the biodegradation are environment-friendly or does not cause any destruction to the environment.

This is a chemical process used to destroy or deactivate the pathogenic microorganisms by using various disinfectants (like chlorine, ozone, etc.) in order to make the water potable for human consumption.

It can define as the average time, in which wastewater remains in the aerobic digester. It is also called hydraulic retention time or sludge retention time.

The whole process is divided into primary, secondary and tertiary treatment methods, where each uses different mechanics to produce effluent from the wastewater. 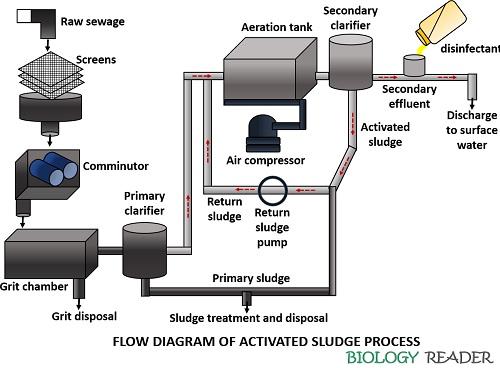 Screening: The raw-sewage waste goes into the bar rack screening via pipe inlets, in which the coarse solids like rags, debris etc. are eliminated by interception. This step efficiently removes the floatable matter and algae.

Grit disposal: It is carried out in the grit chamber, in which particles like sand, gravel, cinders etc. deposit at the bottom relative to their different densities.

Pre-treatment or Primary sedimentation: It is accomplished by the use of primary clarifier or a basin, where water has a certain retention time where the heavy organic solids can sediment (suspended solids). This step ensures elimination of the suspended solids (about 50-70%) and the BOD (nearly 25-40%).

It is the most crucial step of the wastewater treatment, which filters out the effluent from the waste activated sludge. The secondary treatment involves a series of operation, such as:

Aeration tank: It a bioreactor which contains the primary or raw sludge and a microbial suspension. Aeration tank is provided with an air compressor, which maintains the continuous airflow within the reactor. Inside the aeration basin, the microorganisms utilize or decompose the organic matter in order to release carbon dioxide, water, energy and simpler compounds.

Secondary sedimentation: It makes the use of clarifier settler, which further facilitates the solid-liquid separation of the waste activated sludge. The solid waste settled at the bottom of the secondary clarifier is further recycled into the aeration tank via return sludge pump. In contrast, the wastewater from the activated sludge is further subjected to disinfection.

It is the final stage, in which the secondary effluent is treated chemically to ensure the release of high-quality effluent.

Media or Membrane filtration: The remaining particulate matter, dissolved solutes and microbes in the secondary effluent is then separated out by employing ultra-filtration or micro-filtration technique.

Disinfection: The wastewater coming out of the secondary treatment is called secondary effluent, which can be either subjected to UV-disinfection, chlorination or ozonation. 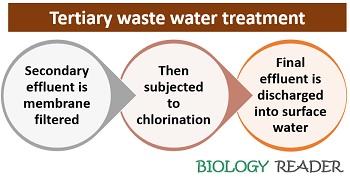