Tikka disease of groundnut is a disease also called Leaf spot disease. The causal organism of tikka disease belongs to the genus Cercospora and mainly includes the two species (Cercospora arachidicola and Cercospora personata). Tikka disease cause epidemics in all the groundnut crop growing countries, including the United States, China, India etc. and according to the survey, it can decrease the crop yield by approximately 22%.

Groundnut: Its biological name is Arachis hypogaea. Groundnut is rich in protein, dietary fibres, fat and other nutrients. According to the studies, groundnut is found to reduce cardiovascular disease. Groundnut is used commercially in many areas like manufacturing of edible oil, in textile industries by the use of its fibres (Ardils), cosmetic industries etc. Therefore, the tikka disease of groundnut can cause huge economic loss by reducing the yield groundnut. 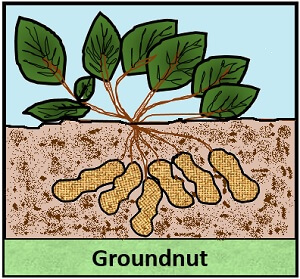 Distribution: Widespread in tropical countries where the groundnut crop production is more.

Symptoms of Tikka Disease of Groundnut 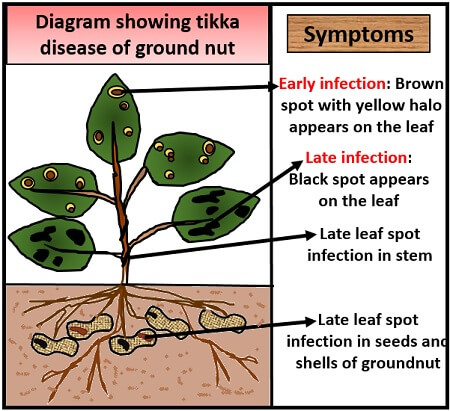 Difference Between Early and Late Leaf Spot Disease of Groundnut

Some environmental and chemical factors favour the incidence of tikka disease in groundnuts, which include:

The disease cycle of tikka disease of groundnut is carried out by the fungal spores of the Cercospora species, i.e. Cercospora arachidicola and Cercospora personata. 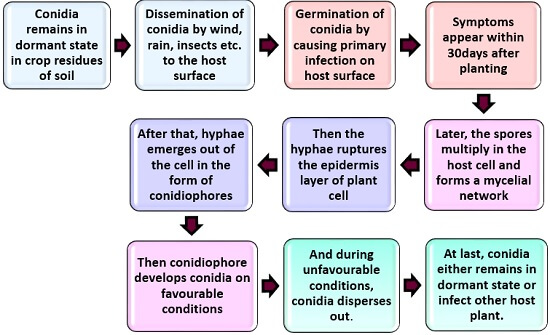 Initially, the conidia remain in a dormant state within the crop residues of the infected plant. Then, the spores, i.e. conidia of Cercospora sp. disseminate by the factors like wind, rain, insect vectors to the host plant surface.

After that, the conidia germinate on the favourable conditions and result in a germ tube formation, by entering into the plant cell through the stomatal pores. There it causes primary infection on the host surface, and the symptoms appear within 30days after planting.

Then the spores multiply and form a high number of hyphae or a mycelial network. These hyphae then rupture from the epidermis wall of the plant cell and emerge out as the long conidiophores.

These conidiophores then develop spores, i.e. conidia on the favourable conditions. After that, the conidia detach from the conidiophore by some unwanted factors like wind, rain splashing etc.

Then after detachment, the conidia will either remain at a dormant state in the soil, or it can infect the other host plant. Therefore, the disease cycle continues like this way only.

Management of early tikka disease of groundnut: The early infections of tikka disease can be managed by the following ways, which includes:

Management of late tikka disease of groundnut: The late infections of tikka disease can be only managed by the use of effective fungicides like Bordeaux mixture as a spray.