Isolation of a single colony or pure culturing is necessary to study the morphology and physiology of the microbial colony isolated from the mixed culture. Preservation and maintenance of the isolated colony are also important to enhance the viability of the microbial cell.

Pure culture merely refers to a distinct colony or cell growth without other contaminants and cell variants. Five forms of pure culture are summarized below: 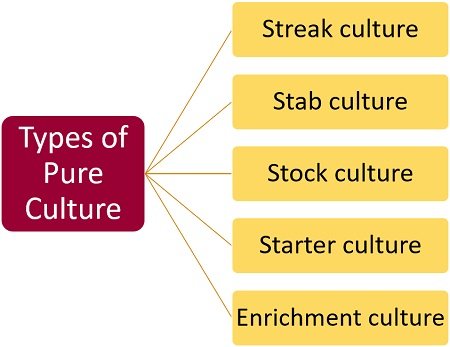 Assessment of Purity of Culture

As mentioned in the figure below, four standard techniques preserve various strains of microorganisms. 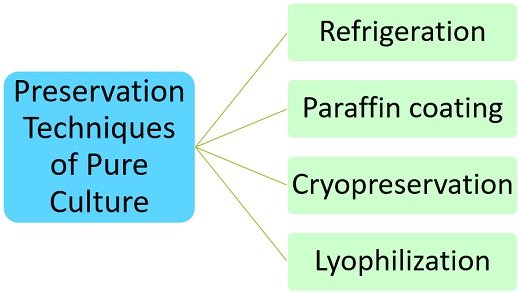 The pure culture can be maintained or preserved under the refrigeration temperature of 0 to 4 °C. Slant cultures are prepared by streaking the discrete colony of interest from the solid nutrient medium.

Refrigerators preserve the bacterial culture for upto 2-3 weeks and a fungal culture for 3-4 months. The refrigeration temperature greatly slows down the metabolic activity of the organisms but does not stop it completely.

Thus, the microbes slowly utilize the nutrient medium, increase in number and finally die due to the nutrient scarcity and accumulation of toxic wastes. The downside of refrigerated microbial culture is that the cells are preserved for a short time.

It is a method of overlaying microbial culture with mineral oil or paraffin. Mineral oil should be added upto the height of the slant so that it fully covers the microbial growth. The paraffin coating method preserves the cell culture for approximately 1-2 years. It is a simple and less expensive technique.

One needs to store the slant cultures with sterile liquid paraffin vertically at room temperature. Liquid paraffin maintains the moisture content of the nutrient medium. It also maintains anaerobic conditions.

Thus, a layer of paraffin maintains the dormant state of the bacterial and fungal cells for several years. It is an economical method to preserve microbial cells for a more extended period.

In the lyophilization method, one needs to freeze the cell culture at a temperature between -60 to -78 °C. Then, subject the cell culture to sublimation that dehydrates the moisture content of the microbial sample by vacuuming.

It causes minor distortion to the microbial cell structures and maintains cell viability for a longer time (more than 30 years). The lyophilized cultures cover minimum storage space. The transportation of small vials to other labs or collection centres becomes easy.

Nevertheless, lyophilized cultures do not require special handling. It is a cost-effective method that requires special equipment and reagents. The downside of the lyophilization method is that it requires optimization for each strain, as the method does not work in the same way.

Subculturing is the best way to maintain pure culture viability. It involves the systemic transfer of little inoculum from the pure old culture to the fresh nutrient agar slants. Stock culture is prepared periodically from the previous stock culture. 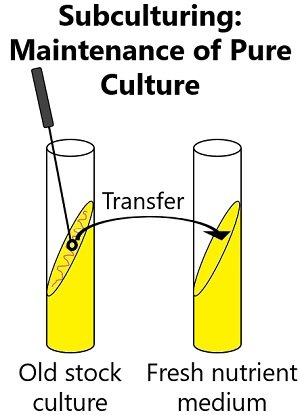 Thus, the subculturing of non-adherent cells involves diluting a small volume of the old stock culture in a new growth medium. It enables cell line propagation. However, it fails to maintain the characteristics of a strain due to the development of variants and mutants.

Therefore, we can conclude that biopreservation plays a pivotal role in maintaining cell integrity, functioning, and characteristics. We could use different preservation methods for different microbial strains. Thus, culture preservation effectively maintains the cells in a dormant state by avoiding the growth of contaminants and variants.

2 thoughts on “Maintenance and Preservation of Pure Culture”