Guard cells appear bean-shaped. They are found in pairs, and a cleft between them constitute the stomatal pore or stoma. Therefore, two guard cells enclosing stomatal aperture colloquially form a structure called stomata.

Guard cells reside in the layer of the leaf epidermis. Stomatal guard cells perform two functional roles like influx or efflux carbon dioxide and water into the leaf cells.

In this context, we will discuss the definition, structure, mechanism behind the opening and closing of the stomata and functions of the guard cells.

In plants, guard cells refer to the protective layer around a stoma that facilitates gas exchange between the plant cells and surrounding. Several pores are found in the leaves, and the cross-sectional view of the leaf cells to let us know the location of guard cells.

The lower or upper epidermis of leaves (vascular plants) holds pairs of guard cells surrounding the stomata. Submerged hydrophytes (Vallisneria and hydrilla) lack stomata. The guard cells monitor the opening and closing of the stomatal aperture.

The shape of guard cells resembles bean or kidney shape. Guard cells always exist in pairs. Between each pair of guard cell, a stomatal pore is present. They are covered by a layer of cuticle that is highly permeable to water vapour and polar substances.

The cell of guard cells is thick towards the opening of the stomatal aperture. Conversely, the outer convex wall of the guard cells is thin. The chemical composition of the cuticle decides the types of molecules that can enter a leaf stoma. 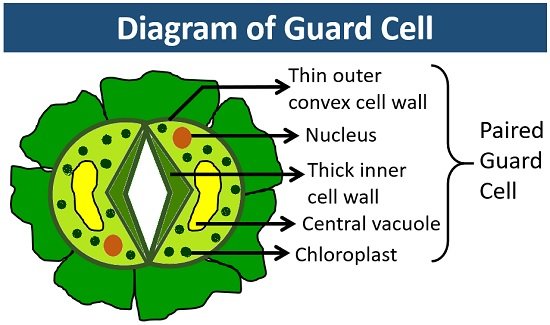 A young guard cell possesses pectin and cellulose in a thin layer of cytoplasm called plasmodesmata. On maturity, this layer disappears. The cell wall of guard cells also contains some perforations that facilitate the passage of large molecules.

Lysosomes contain hydrolytic enzymes like lipases, phosphatases etc. Lipid droplets help in the synthesis of wax and cutin. Vacuoles are centrally located. Its shape changes with the opening and closing of the stomata. A guard cell comprises a single nucleus.

The guard cells serve as the specialized cells of the leaf epidermis, which can change their shape accordingly to the plant’s requirements. They mediate the opening and closing of the tiny aperture or pore called a stoma (singular of the term stomata). The guard cells profound towards the leaf bottom than the leaf top. 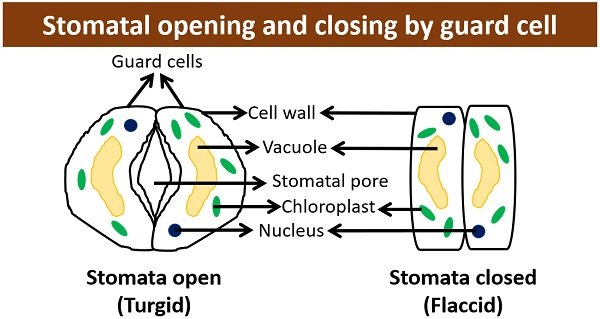 How do Guard Cells Open and Close?

Let us discuss the potassium ion concentration theory by considering the two conditions of the stomata during the day time and night time.

Condition-1 (during the day time)

The sunlight during the day time activates the chloroplasts, and the light-harvesting pigments (chlorophylls) produce a high energy molecule ATP by undergoing light reaction photosynthesis.
The ATP molecules trigger the potassium ions in the nearby subsidiary cells to enter the guard cell via an active transport mechanism. As a result, the concentration of potassium ions increases that makes the guard cell hypertonic.

Due to increased potassium ion concentration, the water potential decreases and results in endosmosis (water enters the guard cell). The guard cell becomes turgid by the increased volume of water. A stoma opens as the guard cell slightly bent outwards due to high turgor pressure.

This condition facilitates the diffusion of atmospheric carbon dioxide into the guard cell and discharges excessive water in the form of vapours out of the stomata via transpiration.

Condition-2 (during the night time)

The guard cell becomes flaccid or returns to its original shape by moving its cell wall inwards, which in turn causes closure of a stoma. This condition prevents the plants from excessive water loss or dehydration.

Let us discuss the sugar concentration theory by looking into the two conditions given below:

Condition-1 (during the day time)

The product of photosynthesis, i.e. carbohydrates or sugars, are produced under the action of sunlight and plant’s chloroplast. Thus, the concentration of sugar within the guard cells increases that in turn decreases the water potential.

Then, the water molecules in the nearby subsidiary cells influx into the guard cell through endosmosis. It results in turgid guard cells and causes the opening of a stoma.

Such condition aids in the light reaction of photosynthesis, during which the plants utilize the light energy to synthesize sugars for their growth and development.

Condition-2 (during the night time)

No photosynthesis occurs, or no carbohydrates form during the night. Thus, the concentration of sugar decreases within the guard cells that in turn increases the water potential. The water molecules in the nearby subsidiary cells exit the guard cell through exosmosis.

It makes the guard cell flaccid and closes a stoma. Here, the plants utilize the carbohydrates for cellular respiration to produce ATP and remove water and carbon dioxide as the by-products.

What do Guard Cells do?

It performs the following significant tasks:

Gaseous exchange: The guard cells open or close the stomatal aperture to facilitate gaseous exchange (like carbon dioxide and oxygen) between the plant cells and surrounding.

Prevents water loss: Stomatal closure at night prevents the plants from dehydration by restricting the water molecules to escape through the stomatal pore.