The ovule is a part of a plant that is popularly known as megasporangium. It is present inside the ovary base, which extends and gives rise to the stalk-like structure called style and finally opens into the stigma. Megasporangium can be defined as a large, sac-like structure, which gives rise to the production of the megaspores (female germ cells) or contributes to the female gametophyte (an embryo sac).

Megasporogenesis is a phenomenon through which the megaspores are produced by the subsequent meiotic division of the megasporangium. The megasporangium starts to swell and develops into a seed after the fertilization and the ovary that surrounds the ovule develops into a fruit. The number of ovules differs in different plants. As the number of the ovule in the ovary can be one like in Avocado, mango etc. and can be more than one like kiwi, apple etc.

Also, the position of ovule may differ in vascular plants (gymnosperms and angiosperms). The ovule is located within the ovary of the angiosperm plants, whereas it is found on the leaf blade of the conifers. You will get to know the definition, the structural components and the classification of ovule based on its position within the ovary.

The ovule can be defined as the large sac or megasporangium that forms megasporocytes, which then yields megaspores. Therefore, megasporangium constitutes a female reproductive part or female gametophyte, which converts into a seed after the fertilization. The megasporangium is a structure present inside an ovary of the flower and attached to the parenchymatous cushion (placenta) that nourishes the ovary. The megasporangium mainly comprises of the stalk and the main body in its structure. In most plants, there is one megasporangium present in the ovary, but the number may also vary.

It mainly comprises of a stalk and the main body. Let us study the detailed structure of an ovule. 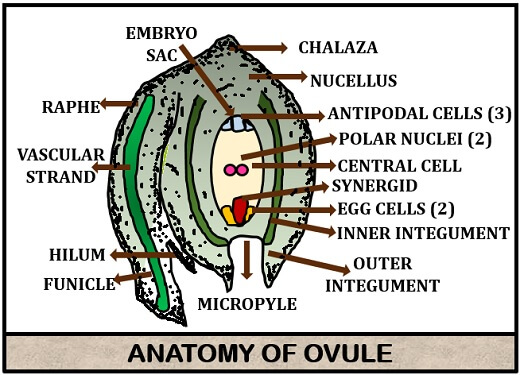 The stalk consists of the following elements:

Funicle: It appears as a stalk-like structure in the megasporangium that originates from the placenta.

Vascular strand: It exists within the funiculus, which conducts nutrient supply from the placenta to the megasporangium.

Hilum: It is the junction, through which the stalk (funicle) communicates with the components of the main body.

Raphe: The raphe seems ridge-like or as an outgrowth of the funicle that is found beyond the hilum.

Integuments: It acts as a protective layer or envelope, which encircles the nucellus. Based on the number of integuments, ovule can be of the following types:

Embryo sac: The embryo sac is the female gametophyte that is embedded in the nucleus and formed by functional megaspore. A typical embryo sac is seven-celled and contains eight nuclei. It is the part where the fertilization occurs after which a seed forms. 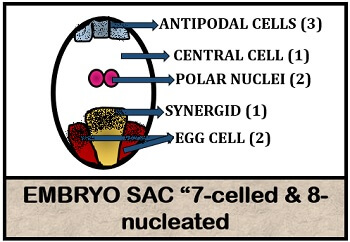 Chalaza: It is present opposite to the micropyle structure or present at the junction of integument and nucellus.

It mainly comprises six classes based on their position inside the ovary (Gynoecium), which are as follows:
Orthotropous Ovule: It is called atropous ovule, which remains erect or straight in a position where the hilum, chalaza and micropyle lie in the same alignment.
Example: Polygonum sp. 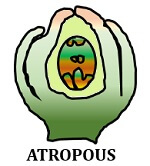 Anatropous Ovule: It is just opposite to the orthotropous ovule. In anatropous type, the megasporangium’s whole body is inverted in position at an angle of 180 degrees, due to which the micropyle lies very close to hilum.
Example: Gamopetalae members. 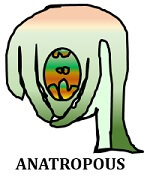 Hemitropous Ovule: Hemianatropous type is transverse in position at an angle of 90 degrees, due to which the micropyle and chalaza lie in the same alignment.
Example: Ranunculus sp.

Campylotropous Ovule: In this type, the main body of a megasporangium is curved in position. Due to this curvature, the micropyle and the chalaza do not lie in the same alignment.
Example: Leguminosae members. 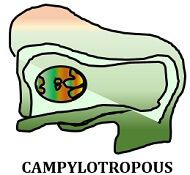 Amphitropous Ovule: It is a horseshoe-shaped, where the embryo sac becomes curved.
Example: Allismaceae, Butomaceae sp. 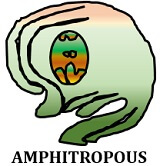 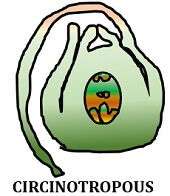 Therefore, after the fertilization, the megasporangium converts into seed, the ovary converts into fruit and the wall of ovary develops into a fruit wall or pericarp.