Nastic movement is another form of curvature movement shown by some members of plants. It occurs in response to diffuse external stimuli. A stimulus that does not affect the plant’s orientation is called a diffuse stimulus. The direction of response in the nastic movement is independent of stimuli direction.

Nastic movement is also referred to as “Nasties”. External stimuli like light and touch are the significant factors responsible for nastic activity. Thus, plants show nasties in response to external stimuli but not towards the direction of the stimulus.

Therefore, it is a non-directional movement. Nastic movement may or may not show growth movement. This post mainly discusses the definition, key points, mechanism and types of nastic movement with examples and diagrams.

It refers to the reversible movement in a plant caused due to the elastic changes in the size of special motor cells within the plant’s tissue. It is another type through which higher plants show curvature movement due to cell size and turgor pressure variations. The plant’s response to the external stimulus is generally non-directional. Alternations in the turgor pressure facilitate nastic movements like the opening and folding of leaves and petals in response to external stimuli. 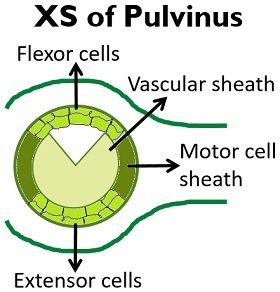 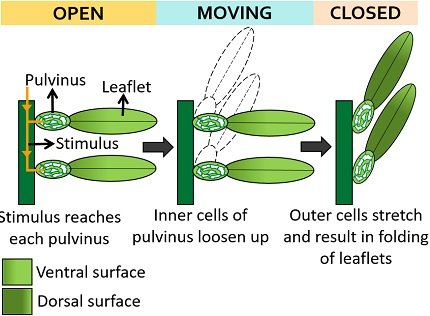 We could demonstrate the pattern of turgor movements by taking examples of each type.

Photonasty: Alternations in the light stimulus induces this kind of movement in plants. Flowers and leaves exhibit photonasty through their cell’s opening and closing action. Leaves of Mimosa pudica remain straight during the daytime and begin to bend from the evening.

Thermonasty: Temperature variation induces such movement in plants. Here, flowers and leaves tend to open or close in response to a rise or drop in the temperature. Opening of Mirabilis jalapa is an example of thermonastic movement that starts blooming late afternoon or evening in response to a temperature drop and closes by mid-morning. The blooming of tulip flowers as the temperature rises is another example of thermonastic movement.

Nyctinasty: Alternations of the day and night temperature induce nyctinasty or sleeping movement in plants. Clover leaves remain straight during the day and begin to bend in the evening.

Seismonasty: Physical contact and mechanical disturbances like shaking, raindrops etc., is responsible for such movement in plants. Stigmas, stamens and leaves undergo seismonasty. Folding of Mimosa pudica leaves in response to touch. 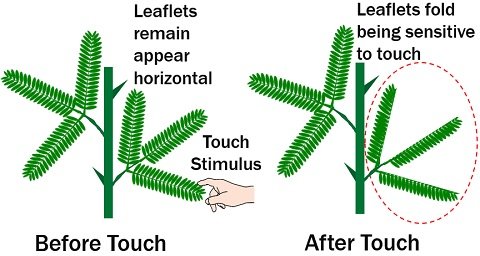 Haptonasty: Tactile stimulus or sense of touch is responsible for such movement in some carnivorous plants such as Venus flytrap that respond instantly to the touch of any insect that may serve as a meal for that plant. 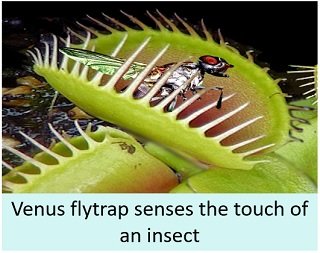 Epinasty refers to the downward-bending of petals from growth at the top, for example, the opening of buds. Hyponasty is just the reverse of hyponasty, in which upward growth occurs from the bottom to the top. Here, the bud stays closed. Leaves and petals generally exhibit epinasty and hyponasty movements. Growing stems usually show circumnutation, in which stems produce helical coiling around suitable solid surfaces. 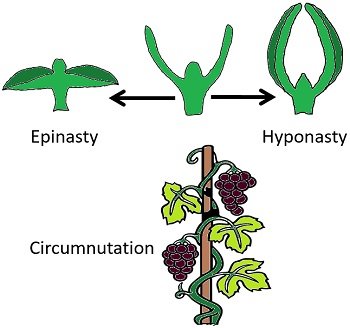 Higher plants exhibit movement of curvature that is categorized into two forms, tropism and nastism. Tropism in plants is a directional growth, whereas nastism is a phenomenon independent of the direction of external stimuli.