Microbial food spoilage is the biological process that causes degradation or decomposition of the food item due to microbial growth and activity that brings undesirable changes and makes the food undesirable for consumption. It primarily depends upon the two factors, namely food matrix (physical and chemical properties of food), the type of microorganisms and the storage conditions. Food spoilage merely refers to the physical state where it does not meet the quality characteristics. Microbial food spoilage can be controlled by subjecting the food under refrigeration, lyophilization and by adding preservatives.

Two common factors favour the growth and multiplication of microorganisms:

Storage Conditions of the Food

Chemical Properties of the Food

The food spoilage is caused due to the degradation of the food components by the microorganisms’ enzymatic activity. The chemical properties of the food that influence microbial growth includes: 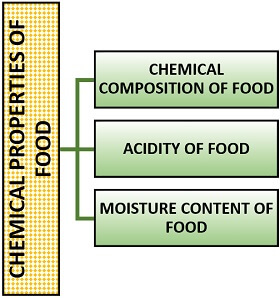 The chemical composition of the food

In food, certain organic biomolecules like protein, carbohydrates and fats are necessary for the microbial growth.

Fat rich foods: In fat-rich foods, the microorganisms which attack are called lipolytic microorganisms. Lipolytic enzymes cause the degradation of fat into simpler forms like fatty acids, glycerol etc.

The lipolytic microorganisms include moulds and some gram-negative bacteria.

The acidity of the food

Moisture and osmotic concentration of food

The food is classified into three types based on the spoilage: 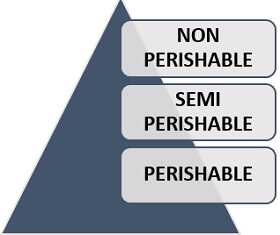 The high water or moisture content is a factor that directly influences microbial growth, as water promotes the growth of all living beings. Therefore, the food which is susceptible to the spoilage process called perishable food.

There are commonly three kinds of microorganisms, which causes food spoilage:

Yeasts: These are the type of fungi that are single-celled and cause fermentation of food. Yeasts are of two types, namely true yeasts and false yeasts. The favourable conditions for the yeasts to cause food spoilage are low pH and low moisture. True yeasts convert sugar into alcohol and carbon dioxide. False yeasts grow on the food surface as a dry film.

Mould: It is another type of fungi, which are multicellular and produce a tough visible mass on the food surface called mycelium. Moulds are aerobic organisms that require oxygen to grow, slightly acidic conditions, moisture, a temperature of 20-40 degrees Celsius. It mostly affects food items like bread, cheese, meat etc.

Bacteria: These are the organisms that cause food spoilage at low moisture, warm environment (5-60 degrees Celsius), neutral acidity and in the presence of oxygen.

The Process of Microbial Food Spoilage

Microbial food spoilage can be summarized into the following steps: 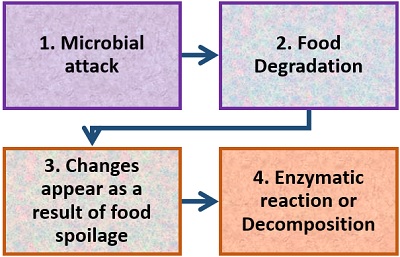 Therefore, we can conclude that the microorganisms’ growth and activity cause food spoilage that imposes some undesirable changes in the colour, texture, taste, and smell of the food item and called microbial food spoilage.