Microprojectile bombardment is also called particle acceleration or gene gun delivery. It is one of the efficient physical methods of gene transfer in plants. Besides plants, it can also transfer genes to mammalian cells and microorganisms.

It is a direct method of transferring the gene of interest to target cells. By employing this method, we can produce transgenic or genetically modified plants. Sanford named the microprojectile bombardment method as biolistics.

PDS-1000/HC apparatus or gene gun device can be used in the biolistic system. These instruments ease the bombardment of the gene-coated particles. Thus, by employing either of the two devices, we could transfect target cells or tissues.

This post discusses the meaning, requirements, procedure and factors affecting the microprojectile bombardment. Also, you will get to know the advantages and disadvantages.

Microprojectile Bombardment of plant tissues is a method of producing chimeric plants by shooting the coated gene into plant tissues or seedlings. It was pioneered by Sanford in 1988.

The method uses microscopic gold or tungsten particles to coat the macromolecules. Exogenous DNA, RNA or proteins are the common macromolecules transferred into plant tissues.

Gene gun or Biolistic transformation is the alternative term. As the term “Gene gun” implies, the method works by bombarding genes into the plant cells.

The Success of Bombardment

The particle bombardment technique has achieved huge success in producing transgenic plants. Maize was the first transgenic crop developed through this method. And, Bt-toxin genes were incorporated into the maize tissues. Let us look into the list of transgenic plants along with the cell sources. 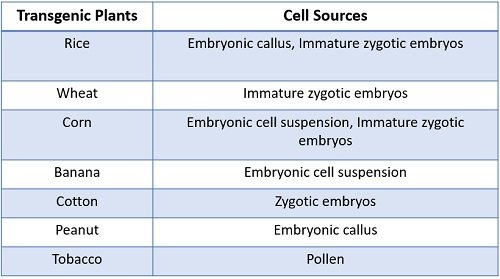 Before proceeding to the whole concept of the gene gun method in plants, have a look into the following:

We can use handheld instruments like gene guns or PDS-1000/HC for gene transfer. Here, we will discuss the basic components of the PDS-1000/HC system: 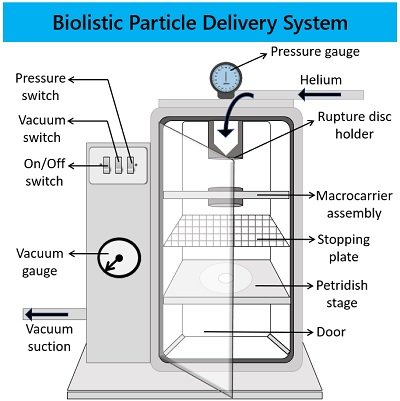 The interior of the bombardment chamber contains a gas acceleration tube at the top. For the bombardment, it uses compressed helium as the propellant. The gas pressure builds within this tube.

Rupture disc retaining cap seals the rupture disc. And, the disc is placed against the end of the gas acceleration tube. It is a one-time-use circular membrane.

Rupture discs respond to any changes in the system pressure. In PDS-1000/HC system, it responds to the gas pressure.

High gas pressure results in breakage of the rupture disc. Metal, plastic or graphite can be used to construct a rupture disc.

The macrocarrier sheet provides a support matrix for the loading of microprojectile. Macrocarrier is in close vicinity towards the rupture disc.

It is present between the macrocarrier assembly and target plant cells. But, microparticles pass through the screen into the bombardment chamber. At last, the microprojectiles penetrate the target cells.

Here, we need to keep the Petri dish containing plant cells. Noting that, the plate should be in the path of macrocarrier assembly. The gene gun method uses two types of plant tissues.

It controls the supply of electrical power into the chamber.

These provide attachment of vacuum, pressure, gas and other sources to the main unit.

The procedure of gene transfer through a biolistic delivery system involves the following stages:

Note: Allow to dry the flyers for at least 20-30 minutes. Also, make sure that all gun parts are completely dry. 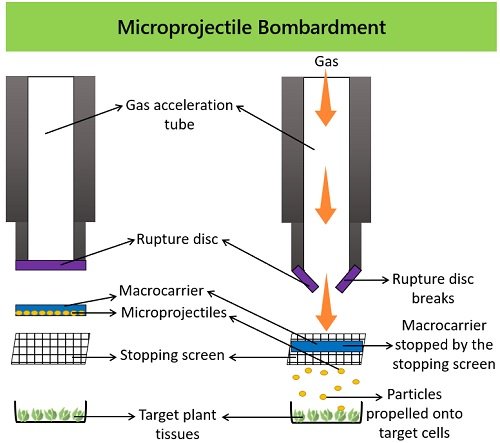 Here, we need to first splice up the vector DNA. By doing this, we get DNA fragments carrying multiple gene copies. Later, we have to precipitate the genes onto the microparticles. The biolistic system employs tungsten or gold microparticles for gene delivery in plants.

The steps of the preintegration phase are explained hereunder:

For the efficient working of the particle bombarding system, the optimization of the following factors is necessary.

1. Nature of Microparticles:
The system uses inert metals (tungsten, gold, platinum) as microparticles. These metals have a high density and carry hundreds of DNA fragments. Due to high density, the particles move faster and penetrate tissues.

Thus, the particle bombardment method is a part of the gene delivery system. The method involves the acceleration of the DNA-coated nanoparticles. The ballistic system uses either of the approaches for particle acceleration:

Gene gun is extensively used device for the gene transfer. But, these days PDS-1000/HC apparatus is widely used to perform microprojectile bombardment.