The difference between cofactor and coenzyme is mainly characterized based on chemical nature and function. Cofactors constitute a large group of helper molecules (inorganic or organic). Conversely, cofactors are small organic molecules.

Coenzymes significantly act as carrier materials to convert the inactive protein (the apoenzyme) into the active form (holoenzyme). In contrast, cofactors serve as biocatalysts that only fasten the enzymatic reaction inside a cell.

Both cofactor and coenzyme are important terms to study the general properties of an enzyme. It is important to note that cofactors or coenzymes only attach to the types of conjugated enzymes containing a non-protein region.

Hence, simple enzymes containing amino acids do not require any additional carriers to show their catalytic activity. This post discusses the key differences between the cofactor and coenzyme, along with the comparison chart, definitions and examples of the two.

It refers to the small, non-protein, helper or accessory molecule necessary to bring an inactive apoenzyme to an active state termed holoenzyme or complete enzyme. Apoenzymes are conjugated proteins, which require an additional factor to act like a functional or catalytically active enzyme. 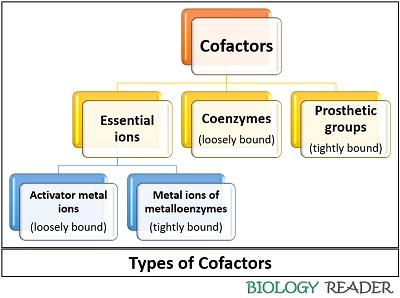 According to the chemical nature and association with an enzyme, the cofactors are classified into two types.

It refers to the co-substrate or secondary substrate that constitutes a group of inactive, non-protein and small organic molecules of low molecular weight (< 1000Da). They directly participate in the enzyme catalytic reactions.

The coenzyme is a subtype of cofactor molecules, which are organic in nature and assists in binding a substrate molecule to an enzyme’s active site. Coenzymes bind weakly to the inactive protein or apoenzyme, which can be easily separated by dialysis. It plays a conclusive role in an inactive enzyme to function. 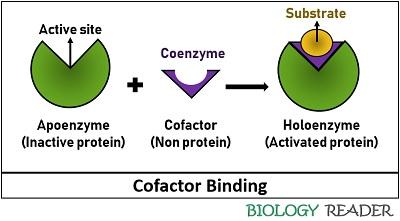 As we have discussed, some enzymes need a specific carrier or molecules to catalyse a reaction. Thus, the coenzyme works as a co-substrate that primarily binds with the substrate molecules, undergoes some alternation during enzyme activity, and later regenerates or functions as a recyclable shuttle.

Prosthetic groups are complex organic groups that bind covalently with the protein. Their separation from an enzyme is difficult, or they only separate by the enzyme denaturation. For instance, heme is a prosthetic group containing an iron atom in the haemoglobin molecule.

There are few examples of the enzymes and their cofactors:

There are few examples of coenzymes of vitamin B-complex:

Key Differences Between Cofactor and Coenzyme

Therefore, we can conclude that the cofactor is a collective term that includes inorganic metal ions, organic compounds (coenzymes) and organic prosthetic groups. Coenzymes and cofactors are the additional factors that facilitate enzyme catalysis by binding with the inactive protein that alone can not convert substrate into product.