Mu phage is also called temperate or transposable phage because it causes transposition of the genes into the host cell, at the time of multiplication. It mainly attacks the members or species of enterobacteria family, and that’s why also known as “Enterobacterial phage Mu”. The transposition of Mu-phage occurs by either of the two mechanisms:

It is a type of a bacteriophage (the virus that invades the host bacterial cell), which shows the properties of both viruses and transposons.

Several discoveries have led to the study and discovery of Mu-phage. 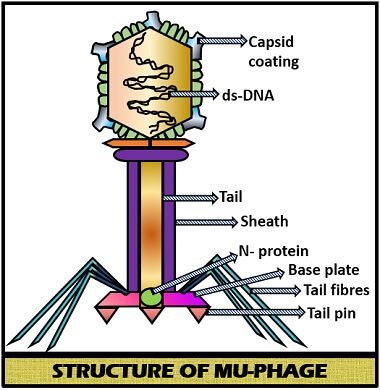 Head: It is the terminal part of the Mu phage, which carries the viral genome and a protein later (capsid) encases the hexagonal head.

Neck: It is the middle portion of the Mu phage, which acts as the joining element of the two components, i.e. head and tail.

Tail: It is long, thick and contractile because of the presence of crossbands.

Mu phage consists of a ds-DNA that is linear and non-segmented. Its genome consists of 37,611 base pairs. The guanine and cytosine content is 35%. The genome is non-permuted, consists of some unusual base pairs and terminally redundant sequences. Mu phage genome encodes 55 genes, which perform different functions in its life cycle. The genome size is 40 Kb in length.

The functions of different genes are as follows:

Its lifecycle can be summarized in the following steps: 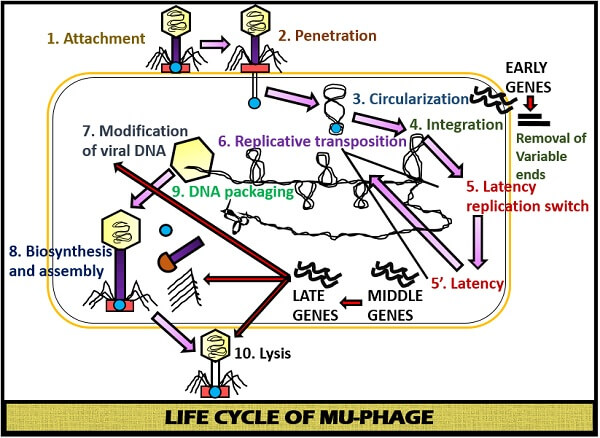 By the contraction of the tail’s sheath, the rigid internal material gets into the host cell surface through the cell envelope. The N protein ( non-replicative protein) also gets injected along with the viral genome.

The N-protein undergoes circularization once it binds with the viral genome.

After circularization, early transcription occurs that gives rise to the Repc and Ner repressors and DDE recombinase A (Mu A). These genes help in the integration of the viral genome with the host genome. During this step, the variable ends are cut off from the viral genome.

After the non-replicative transposition, the ratio of Repc and Ner repressors decide whether the phage will enter to the lysogenic phage or lytic phage.

After the inactivation of Repc, there is an expression of  MuA and MuB genes. MuA is the DDE recombinase-A enzyme, and MuB is the target DNA activator B. MuA performs the transposition of viral genome ends and host DNA. The target DNA activator B helps in the replication of viral host DNA, leading to the formation of the two copies. This type of replication is called replicative transposition. This replication can lead to 100 viral genomes after successive rounds.

The late gene synthesizes the structural genes of Mu phage, which leads to the biosynthesis of virus particles. Then the virus particles like empty capsid, tail fibres etc. get to assemble.

The packaging of virion

Cell lysis and release of virion

After packaging, the newly synthesized virions release out of the host cell by the help of lye gene that encodes lytic enzymes (responsible for the cell lysis).