The difference between anabolism and catabolism is mainly characterized due to the difference in the types of substrates participating, types of products forming and the type of metabolic phase.

Both anabolism and catabolism are the two common branches of metabolism through which body cells convert food into energy. Thus, metabolism is necessary for growth, movement and different cellular tasks.

The biosynthetic metabolic phase involves a set of enzyme-catalyzed reactions constructing biomolecules or macromolecules from simple molecules. Anabolism is an endergonic process requiring energy input. Anabolic reactions are non-spontaneous,i.e. require energy from outside.

It converts kinetic energy into potential energy. Anabolism is necessary for cell growth and development. It involves condensation and polymerization reactions, as small molecules condense or polymerize into a large biomolecule.

It refers to the metabolic process that involves a set of enzyme-catalyzed reactions destructing large biomolecules or macromolecules into simple or micromolecules. Catabolism is an exergonic reaction releasing energy in the form of adenosine triphosphate. Catabolic reactions are generally spontaneous, which means cells can utilize the released energy in various forms.

Photosynthesis in Plants: It is an anabolic process carried out by autotrophic plants. They produce different forms of carbohydrates like glucose, cellulose, starch etc., by fixing atmospheric carbon dioxide and using solar energy.

Gluconeogenesis: It is an anabolic pathway through which non-carbohydrate precursor molecules, i.e. three-carbon compounds (pyruvate or lactate), produce a hexose sugar, i.e. glucose. It occurs in case of insufficient dietary intake or prolonged starvation.

Nucleotide Synthesis: It is an anabolic reaction in which a combination of a nitrogenous base, pentose sugar and phosphate form the nucleotide through ATP hydrolysis.

Glycolysis: It is a catabolic pathway through which a set of enzymes oxidizes a hexose sugar (glucose) to give two molecules of a three-carbon compound, i.e. pyruvate. Oxidation per glucose molecule produces 2 ATP molecules.

Alcoholic or Ethanol Fermentation: Organisms like yeasts anaerobically convert sugars like glucose or sucrose into cellular energy ATP and ethanol with carbon dioxide as the by-product. 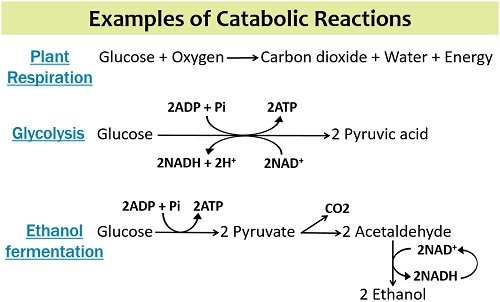 Key Differences Between Anabolism and Catabolism

Anabolism and catabolism are the processes that we go through in our daily life. Like, the sun provides the primary source of energy to all the life forms. For instance, producers or autotrophs like plants utilize the energy released by the sun’s fusion reactions to form sugars that could be in the form of mono, di and polysaccharides. Thus, photosynthesis is an anabolic process.

Then, consumers like animals and humans intake the food containing complex polysaccharides, vitamins, proteins, etc. and digest them into simpler forms to get energy through ADP phosphorylation. Cells utilize the energy to construct tissues and other bodily structures. Thus, food digestion is a catabolic process. Therefore, anabolism and catabolism are the two processes that occur over and over again.