A nucleotide is a compound, which can form a polynucleotide chain by the union of nitrogenous bases and sugar-phosphate group. Monomers of nucleotide units are connected via a covalent phosphodiester bond. Nitrogenous bases, i.e. purines and pyrimidine, are attached via weak hydrogen bonds. The bases link with a deoxyribose pentose sugar via an N-glycosidic bond.

There is another term “Nucleoside” which consists of two components, mainly nitrogenous bases and pentose sugar. The whole nucleoside complex attaches with the phosphate group via a strong phosphodiester bond. Thus, the sugar-phosphate group acts as a backbone of the genetic material (DNA and RNA) and provides stability to the structural configuration of the nucleic acids.

In simple words, we can say that the combination of nucleoside and phosphate group contributes to the molecular structure (Nucleotide). Nucleotides play a central role in cellular processes like metabolic regulation, signal transduction, hormonal regulation and many more functions. In this context, we will learn definition, characteristics, components, nomenclature system and functions of nucleotide. 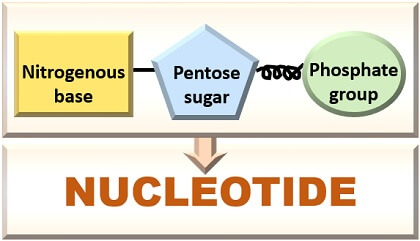 Let us study some of the facts related to nucleotides.

A nucleotide consists of a nitrogenous base, a pentose sugar and a phosphate group. 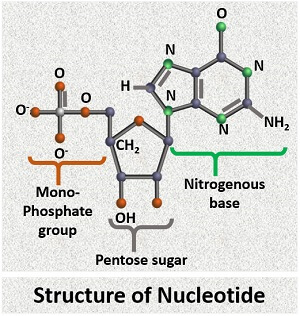 A nucleotide makes up the biomolecules “Nucleic acid” during its polymeric state, where they show a directional polarity. In a polynucleotide chain, The 3’-OH end of one nucleoside attaches to the next 5’-phosphate group. Let us discuss the structural difference between the DNA and RNA nucleotide. 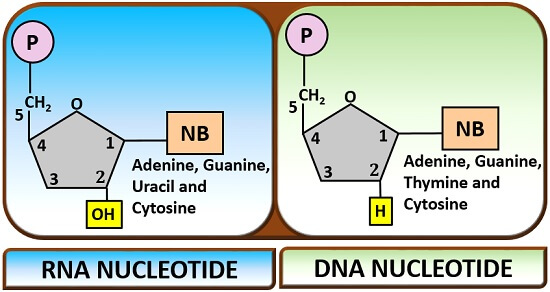 The nucleotide includes three main components like nitrogenous base, a pentose sugar and a phosphate moiety. 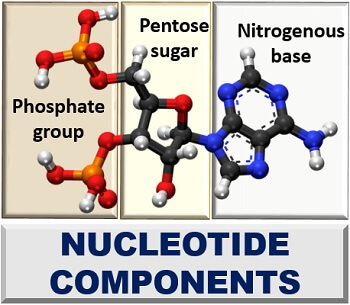 Nomenclature of deoxyribonucleotide is given in the table below, which indicates the incorporation of a single phosphate group to the deoxyribonucleoside.

The nucleotides play a crucial role in many biological processes like:

The nucleotides act as “Activated precursors” where they unite to form a polymeric state “Nucleic acid”, i.e. DNA and RNA. The metabolism of nucleic acid is the anabolic process, in which a nitrogenous base, pentose sugar and a phosphate group undergo a chemical reaction to form either deoxyribonucleic acid or ribonucleic acid.

Adenosine triphosphate or ATP is the “Energy currency” used in many cellular and biological processes. ATP helps in the synthesis of ribonucleic acid. Guanosine triphosphate or GTP is a nucleotide which involves in a movement of specific molecules or ions and the conformational change in a biomolecule like protein.

Nucleotide derivatives like cAMP and cGMP are the cyclic derivatives derived from adenosine triphosphate and guanosine triphosphate. Both cAMP and cGMP are the secondary messengers acting as the activated intermediates entering and regulating the metabolic pathways. cAMP regulates the allosteric mechanism in metabolic systems. The cGMP governs the action of hormones like peptide hormones.

Cyclic nucleotides like cAMP, cGMP etc. take part in the process of “Signal transduction” where the cells communicate with their neighbouring cell. In signal transduction, a cell produces a signal in response via modifying cellular activity and gene expression.

Nucleotides are compositely formed by the nitrogenous bases, 5-C sugar and phosphate group, which eventually contributes to a polynucleotide chain, thereby forming nucleic acids like DNA and RNA.