Phenomena: Absorption and adsorption are the phenomena, which makes the use of absorbent and adsorbate, respectively. Both the processes differ in principle, by what mechanism they allow the particles to enter.

Through the process of absorption, many solid, liquid and gaseous particles may enter into the absorbent either via dissolution, diffusion or osmosis. Therefore, absorbent requires physical energy from outside to separate the particles within the matrix. 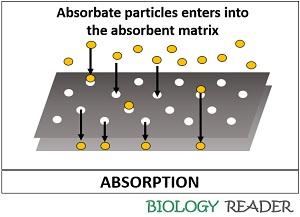 The process of absorption can be understood by taking an example of an absorbate as juice and absorbent as tissue paper. Tissue paper immediately absorbs the liquid substance, so the juice will get absorbed within the pores of a tissue paper that it becomes unidentifiable to separate that.

Here, the interaction between the absorbent and absorbate particles is persistent but does not involve any kind of physical or chemical interaction. The rate of absorption is uniform, and the heat exchange between the surface and surrounding is endothermic, i.e. requires energy from outside.

Chemical absorption: It is a chemically reactive process, which occurs between the absorbate particles and absorbent matrix. For example, aqueous sodium hydroxide (an absorbent) dissolves an acid gas.

Physical absorption: It is chemically non-reactive and the process occurs between two phases of matter. For an instance a liquid absorbs a gas like in the water, there is a certain amount of dissolved oxygen. It depends on the phases and the physical properties of absorbate like solubility and other factors like pressure and temperature.

The adsorbent can define as a matrix which separates or retain the particles over its surface, through the phenomena commonly termed as adsorption. The particles that are separated by the adsorbent matrix are said to be adsorbate materials.

Through the process of adsorption, many dissolved solid, liquid and gaseous particles can get separated over the surface of the absorbent via adhesion of particles. Therefore, absorbent does not need physical energy to separate the particles adhered to the surface matrix. 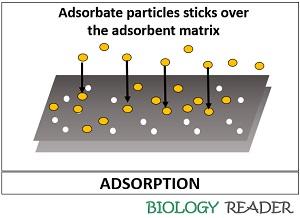 Here, the interaction between the absorbent and absorbate particles is non-persistent, as the particles loosely adhere to the surface of the adsorbent matrix. The absorbate stick to the adsorbent via some physical force of interaction or chemical bond like Van der Waals intermolecular forces or covalent bonds, respectively.

The rate of adsorption is non-uniform, which increases gradually until it reaches an equilibrium state. The heat exchange between the surface and surrounding is exothermic, i.e. energy is liberated.

Physical adsorption: It also refers as Physisorption, in which absorbent matrix and the absorbate particles associate via a weak Van der Waal forces.

Chemical adsorption: It also refers as Chemisorption, in which absorbent matrix and the absorbate particles associate via chemical bond especially covalent bond.

The key role of absorbent is to dissolute or absorb the particles interacting with it. Some of the examples are mentioned below: 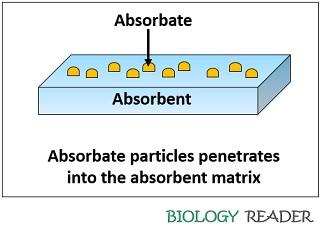 The function of absorbent is to separate the particles interacting with it. Some of the examples include: 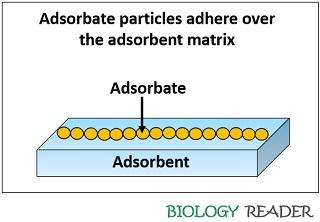 Key Differences Between Absorbent and Adsorbent

Therefore, we can conclude that the absorption and adsorption are the two mechanisms that depend upon the solid or liquid matrix and the dissolved solid, liquid and gaseous particles to be separated.