The onion peel cell experiment is very popular for observing a plant cell structure. Onion is a eukaryotic plant that contains multicellular cells. We know that the cell is a structural and functional unit of life that builds up living structures.

The bulb of onion is formed from modified leaves. Like plant cells, onions cells have a rigid cell wall and a cell membrane enclosing the cytoplasm and nucleus.

Onion epidermal cells exist as a single layer that serves as protective skin. It separates the thick, juicy scale leaves of the onion. Thus, the bulb of an onion is formed from modified leaves.

The epidermal cell of an onion bulb is simple and transparent. Its microscopic observation introduces the general view of plant anatomy to the students. 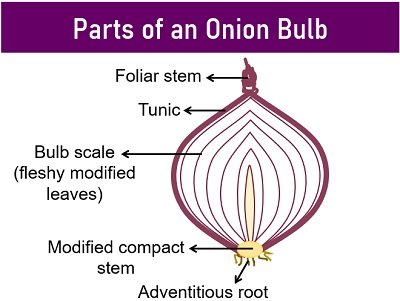 Firm and medium-sized onions are generally used to visualize the onion’s epidermal cells. This post explains the theory, requirements, and procedure of the onion peel experiment. Also, the observation, result and precautions of the experiment are also discussed.

We need the following glassware and reagents to prepare a temporary slide of an onion peel.

Materials needed to stain and mount the onion peel

The steps to perform the onion peel cell experiment are as follows:

Steps to separate an onion peel

A. Take an onion, separate its outermost peel and chop it into two equal halves.

B. Then take one fleshy scale leaf of a chopped onion bulb and split it into two.

C. Then carefully pull a thin, transparent epidermal peel from the convex surface of the scale leaf using forceps.

D. Then, wash the separated peel in the Petri plate containing water. You can cut the onion peel into small rectangular pieces using a blade. 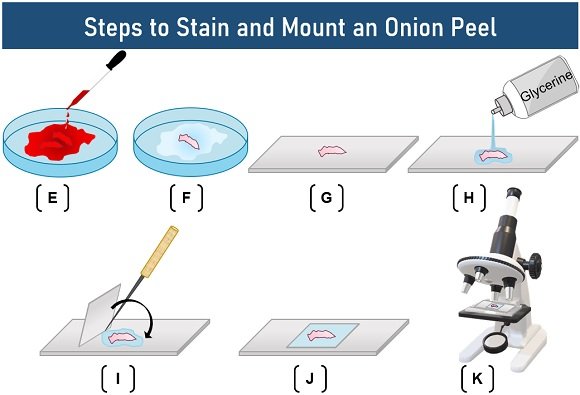 Steps to stain and mount an onion peel

E. After that, transfer the onion peels into the Petri plate containing diluted safranin stain. Leave the peels undisturbed for about 3 minutes.

F. Finally, rinse the extra stain of the peel by again dipping it in the Petri plate containing water.

G. With the help of a brush or forcep, transfer the peel to the centre of a clean glass slide.

H. Then to mount the onion peel, add a drop of glycerine over the centre of the slide. Glycerine prevents the peel from drying up.

I. After that, carefully mount a cover slip over the centre of the prepared slide by slowly lowering it with a needle. During this stage, you need to avoid entry of any air bubble.

J. Using a piece of blotting paper, remove extra glycerine from the margins of a cover slip.

K. Observe the temporary slide under the compound microscope.

Onion epidermal cells are rectangular and compactly arranged (with no intercellular spaces). There is a distinct cell wall, a prominent nucleus and a vacuole.

Therefore, the onion peel cell experiment is an engrossing activity that can help a student to observe and study the plant cell structure. Students can prepare the temporary slide and observe the differences between the slide with stained onion skin or the slide without any stain. The microscopic observation of onion peel cells will allow students to examine each component of onion cells closely.