Various external stimuli or environmental factors like light, gravity, water, temperature, and other factors influence tropic movement. The phenomenon of tropic movements in plants is popularly known as tropism.

Tropism merely refers to the active movement of the plant’s specific parts in response to some physical and chemical factors in order to achieve different cellular growth and development.

The six common tropisms based on external stimuli are phototropism, geotropism, hydrotropism, thermotropism, thigmotropism, and chemotropism. This post describes the definition, key points and different types of tropisms in plants.

Definition of Tropic Movement in Plants

Different parts of plants show different curvature or bending movements relative to the changes in environmental factors. Tropic movement is characterized by more growth on one side and less growth on the other side of the plant’s different parts on the exposure of external stimuli.

Due to the plant’s sessile nature, they cannot move from one place to the other, unlike humans, animals, birds etc. However, they tend to show different growth responses to cope with copious environmental changes in order to compensate for their sessile nature. Different cellular growth and development in response to external stimuli like light, water, temperature etc., is the characteristic feature of tropism.

In tropisms, environmental signals or stimuli orient the direction of a plant’s growth. Tactic movement in microorganisms is similar to the tropism in plants, where they also respond to external stimuli. The tropism mechanism primarily includes the three consecutive stages.

Types and Examples of Tropic Movements in Plants

Plants show six forms of tropisms based on the different external stimuli. We will discuss each type, along with diagrams and examples.

It refers to plant growth in response to the light stimulus. This movement stimulates the auxin hormone that elongates the cells on the opposite side from the light. It is also called heliotropism.

The shoot system (including stems and leaves) grows towards the light’s direction or shows positive phototropism. They rearrange their chloroplasts to maximize photosynthesis and plant growth. Roots grow away from the source of light or show negative phototropism. 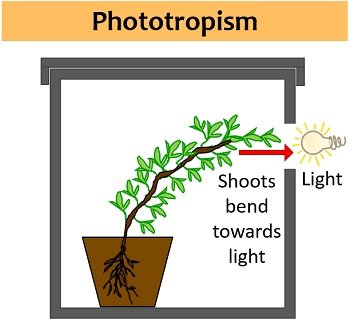 Thus, roots grow towards the centre of the earth. Plants perceive gravity when the starch granules within the root cells fall towards the bottom of the cell. Later, the cell membrane receives a signal, thereby translating the signal into growth responses. 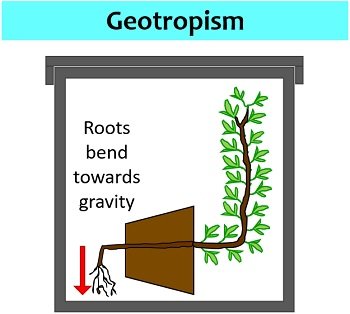 Therefore, roots will show the movement of curvature by bending towards the direction similar to the gravitational pull.

It refers to the growth of plants in response to the water stimulus. Roots show positive hydrotropism, i.e. they show the movement of curvature towards the water. Stems generally display indifferent or negative hydrotropism. In varying concentrations of water, roots respond differently. 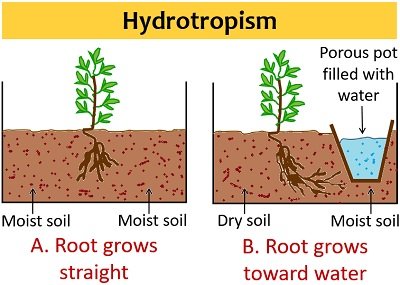 You can see in the above diagram that roots appear straight in the moist soil. But, roots exhibit hydrotropic curvature from the dry soil to the damp soil. The root cap senses the water signal and passes it to the elongated portion of the root.

It is also called haptotropism. Here, the growth of the plant occurs in response to the touch or contact stimulus. Unilateral growth inhibition facilitates thigmotropism. Shoots have a positive touch response.

The thigmotropism mechanism results in the opening, closing and twisting of petals and leaves in some plants. Tendrils and twiners show thigmotropism. Differential and rapid contact coiling are the two common forms of thigmotropism. 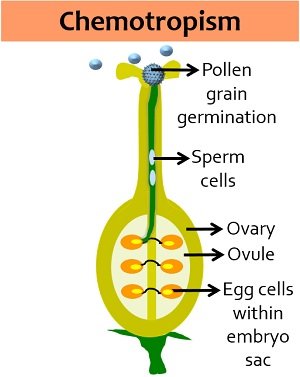 Examples of positive chemotropism include the following:

Thus, we can conclude that the entire body of plants cannot move. However, parts like roots and stems tend to show tropic movements by sensing the directions of environmental signals like light, temperature, gravity etc. After sensing environmental stimulus, they orient themselves toward or away from the direction of the stimulus.