Organic matter decomposition is an ecological process that returns nutrients to the soil. The decomposition process has two stages one is on the soil, and the second is below the ground.

In the first stage, several terrestrial animals and insects above the ground feed on dead leaves and animal residues left over the ground. Here, the nutrients and energy enter the food web, while some nutrients leach into the soil via chemical action.

But, the next stage is fundamentally a soil-based process. Different organisms take part in the successive digestion of organic matter. But, these organisms are broadly classified into two main categories based on their function.

The SOM influences soil’s physical, chemical and biological properties. This post explains the definition and process of organic matter decomposition.

Decomposition refers to the biochemical transformation of complex organic matter into CO2 and humus with a simultaneous release of nutrients. It’s a natural process that begins when plant and animal wastes pile up over the ground. Decomposition relies upon the following factors:

It is an integral process for recycling nutrients back into the soil. Microbes and animals on or above the soil surface are the leads in the decomposition process.

First, the litter is physically broken down into smaller pieces. Earthworms, mites, ants, etc., take part in the initial stages of decomposition. The smaller pieces of litter or the fragmented waste they release is called “Detritus“. Earthworms, beetles, snails, millipedes etc., are detrivores that consume the detritus or decaying matter.

After that, decomposers come into action. Heterotrophic bacteria and fungi primarily function as decomposers that allow a continuous flow of energy within the ecosystem. They prominently feed upon plant and animal remains and secrete chemicals to digest the organic materials in detritus.

Thus, such groups of organisms relying upon dead organic matter are called saprophytes. During their cellular respiration, they get energy through the breaking of chemical bonds in the organic matter. It releases CO2 and reduces the organic matter into inorganic minerals like N, P, S, etc.

Humus is the material left out by the end of the decomposition process. Humification is the process that involves the formation of humus or humic substances.

It houses minerals and makes them accessible for plants. Humus is a portion of soil found mainly in the topsoil. It makes the soil fertile, which is necessary for plant growth. 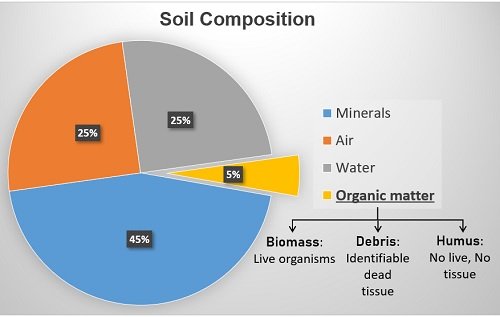 It contains remains of roots, plant materials and soil organisms. It contributes around 5% to the structure of the soil. SOM comprises 80% humus, 10% soil organisms and 10% root exudates.

Living organisms comprise cells and tissues made of complex organic molecules. As it’s a part of life that every living organism can live for a certain period. So, when an organism dies, decomposition is a natural process that plays its role in cleaning up the environment.

Besides that, kitchen, animal, plant and paper wastes are also decomposable. Any organic waste of plant, animal or human origin needs to be decomposed to form soil organic matter.

Soil microorganisms (like bacteria and fungi) and soil invertebrates (earthworms, mites and ants) degrade or break down the complex organic form into simpler ones. The ultimate products of decomposition are inorganic minerals, carbon dioxide and water.

There will be piles of dead biomass if decomposition does not occur. Decomposition is a biological process that involves detrivores and decomposers. They collaborate to bring physical and chemical changes in the organic material coming into the soil. 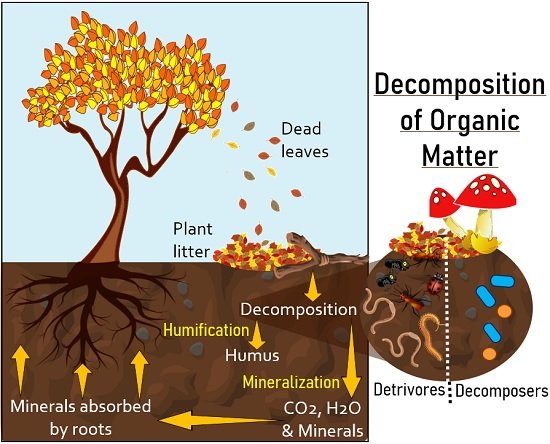 The breakdown of plant and animal residues is a complex process. It involves physical fragmentation, chemical alteration of organic matter, and later release of mineral nutrients.

The dead leaves, twigs, bark etc., fall off from the tree and pile up, contributing to the plant litter. Dead animals and their excretory products also add to the litter.

Over time, the plant and animal litter are decomposed into essential chemical elements by the association of soil microorganisms and invertebrates. Litter decomposition supplies soluble nutrients into the soil that can be readily used by plants and soil microbial communities.

Organisms like earthworms, snails, mites, and ants are involved in litter decomposition. These soil invertebrates feed upon the organic inputs and dead microbial cells. Soil animals incorporate small pieces of litter into the soil, increasing surface area for further decomposition by bacteria and fungi.

We know that saprophytes are organisms that solely feed upon the dead or decaying matter of plants and animals to survive. Saprophytic fungi, especially macrofungi, rely on dead plant and animal organic wastes to obtain food and energy.

So, macrofungi and some heterotrophic bacteria colonize the dead or decaying organic matter on the soil. Later, these microorganisms partially oxidize organic materials in the waste through their enzyme system to obtain energy and carbon.

They further break the simpler organic molecules into mineralized nutrients. N, P and S etc., are the mineral nutrients released into the soil that plants can reuse. Thus, the release of mineral nutrients from the decomposition of organic matter is called mineralization.

Carbon dioxide (CO2), water, and plant nutrients are the products of the decomposition process. The thick brown or black amorphous material left after the litter decomposition is called humus.

Humus is an organic-rich material formed after the subsequent disintegration of plant and animal matter. Earthworms help in mixing humus with soil minerals.

Decomposition ensures the recycling of nutrients to plants and the immobilization of nutrients again into organic forms that the plants cannot utilize. In some cases, the minerals remain in the soil for years and years.

Mineralization and Immobilization of Organic Matter

The major constituents of organic matter are carbon, nitrogen, phosphorus and sulphur. Mineralization is a biological process in which the soil microflora decomposes the organic materials into simpler inorganic minerals. Immobilization is the process by which minerals are converted from the inorganic form to the organic form.

Bacteria and fungi are predominantly involved in mineralizing organic matter in soils. The enzymes within these microorganisms oxidize the organic compounds in the organic matter. As a result, chemical energy, carbon dioxide, water and nutrients are released as products of decomposition.

In soil, the nutrients must be in mineral forms. Plants easily take mineral nutrients from the soil to perform various tasks. To understand mineralization, let’s take an example of a protein molecule containing carbon, nitrogen, phosphorus and sulphur.

The soil microorganisms will first break down the complex protein into simple amino acids to completely mineralize it before converting carbon to carbon dioxide, nitrogen to ammonium, phosphorus to phosphate and sulphur to sulphate.

It is the reverse of mineralization. Cellular microbes like bacteria, fungi etc., incorporate the nutrients in the cell and make them unavailable to plants. Both nutrient mineralization and immobilization process are important in the soil ecosystem to maintain equilibrium.

After reading this post, it must be clear why decomposition is important. It is important because it brings back nutrients tied in the organic matter back to the soil. These nutrients are recyclable by plants for cellular growth and developmental stages in their life cycle. As plants are the primary producers, we all depend on them for food and nutrition.