PCR amplification or Molecular photocopying is a popular method used to amplify the short DNA fragments. PCR is an acronym used for Polymerase chain reaction. It provides a modern, inexpensive, and rapid method of amplifying specific DNA sequences, while the traditional method was quite time-consuming (requires several days or a week).

Polymerase chain reaction can yield million to billion copies of the desired DNA sequence. Kerry Mullis was the first scientist who introduced PCR with its remarkable applicability in genetic and molecular biology. It is a selective method amplifying the specific or target segment of DNA or RNA into specific fragments.

PCR completely relies on thermal cycling and involves 20-40 thermal cycles. It primarily uses Taq polymerases and primers to amplify a single strand of DNA or RNA. PCR generally amplifies the target strand of 0.1-10 kbp in length. This post mainly discusses the definition, set-up, steps, advantages and limitations of PCR amplification.

PCR or polymerase chain reaction refers to the in vitro technique of preparing around million copies of the target DNA sequence through consecutive stages of heat denaturation, primer annealing, and primer extension. It is an advanced molecular technology that revolutionized DNA study more in medical and biological research like DNA mapping, DNA fingerprinting, forensics, detection of microorganisms, etc.

PCR aims to yield more copies of desired DNA sequence or provides different scopes in studying the DNA. For instance, DNA amplified by PCR can be used in DNA sequencing and DNA cloning, which substantially require DNA samples.

The polymerase chain reaction is a molecular method, which set-up requires the following reactants: 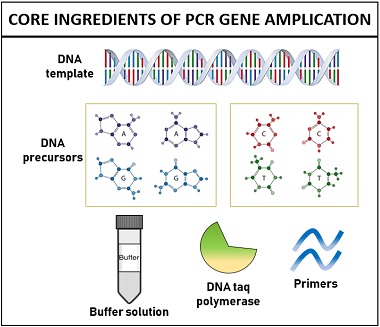 Mg2+ acts as a cofactor of DNA polymerases that facilitate the incorporation of DNA precursors during polymerization. The magnesium ions associate with an enzyme Taq polymerase to bring about the formation of a phosphodiester bond between the primer terminus and the phosphate group of dNTPs.

It is utilized through MgCl2 solution added to the PCR mixture, which concentration is optimized within a range of 1–4 mM. Its high and low concentration can affect the productivity of PCR.

It is most active at a temperature of 70°C, at which it can add on approximately 60 bases per second. The heat-stability of Taq polymerase is ideal for PCR, as the template DNA is subjected to thermal cycling to get new DNA strands.

They are the short pieces of single-stranded DNA (15-30 bp long) that aid in new DNA strands synthesis. PCR uses two primers. The designing of two primers require some information prior to the desired DNA sequence from the target DNA.

Thus, the PCR primers are selective relative to a desired DNA sequence in the template DNA. Primers attach oppositely towards the edges of the intended DNA sequence via complementary base pairing.

Once they bind to the desired DNA sequence, the sequence can be lengthened by the DNA polymerase, and the target sequence gets copied. Ideal properties of primers include: 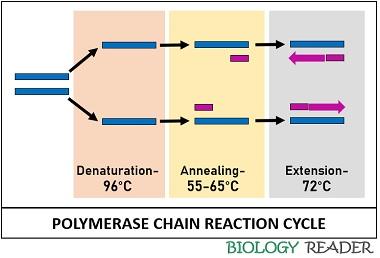 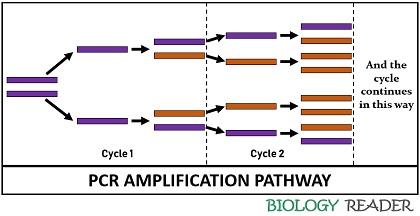 Finally, cool the reaction chamber up to 4–15 °C for short-term storage of the PCR products. The reaction cycle of PCR repeats 25-35 times to produce millions to billions of copies. Generally, the reaction cycle takes 22-44 hours to complete but depends on the DNA length, the concentration of PCR ingredients, the working efficiency of the instrument, and more other factors.

Therefore, we can conclude that PCR gene amplification aims to double the PCR product achieved by 100% reaction efficiency in each cycle. PCR produces exponential copies of DNA throughout the reaction cycle. A single copy of DNA can yield up to one billion copies after 30 rounds of amplification. Its working efficiency primarily depends upon the reagent’s optimization during the setup.