The physical state of water has three phases (solid, liquid and gas), depending upon the factors like hydrogen bonding, temperature and pressure. Water is a polar inorganic compound that serves as a universal solvent. It has a neutral pH in a pure state. 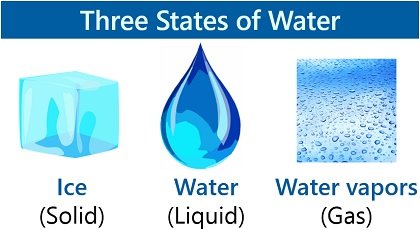 This post describes the definition, properties, and configuration of water molecules in solid, liquid, and gaseous states. You will also learn each step of phase transitions in water.

It occurs when the water reaches the freezing temperature (> 0 degrees Celsius). Four hydrogen bonds are present per water molecule in the solid state. It contributes to the rigidness of the ice.

There is less intermolecular space between water molecules of ice. Thus, molecules of ice have strong forces of attraction that hold the ice particles closely and tightly. 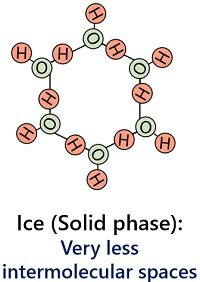 Ice possesses a high density (0.916 g/cm3). The solid state of water has a definite or rigid shape and fixed size due to the compact arrangement of water molecules.

In addition, it also possesses a fixed volume. Ice has negligible compressibility and fluidity. In simple words, ice will not conform to the container’s shape. Thus, the solid state of water has minimum kinetic energy. 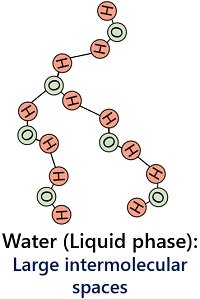 In addition, it has an indefinite shape due to water molecules’ loose or firm arrangement. However, liquid water has a fixed volume. Water in a liquid state is slightly compressible, and particles can flow or slide over one another.

In simple words, the liquid water conforms according to the shape of the container. Here, the kinetic energy of water molecules is more than the ice or solid state.

Water molecules in the gaseous phase have substantial intermolecular spaces. In addition, water vapours have the least intermolecular force of attraction between the particles. 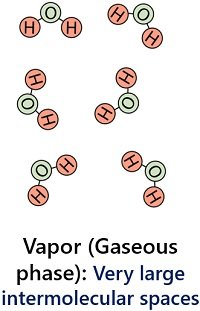 This results in the independent movement of water molecules in the gaseous phase. Water vapours possess a very low density (0.590 g/cm3) and they expand into indefinite volume and shape.

Hydrogen bonds break when the physical state of water changes from a solid to liquid to gas. As a result, the water’s freedom of movement increases or the compactness between water molecules decreases.

This change of water into different states is called the phase transition of water. Temperature plays a critical role in deciding the physical state of water. 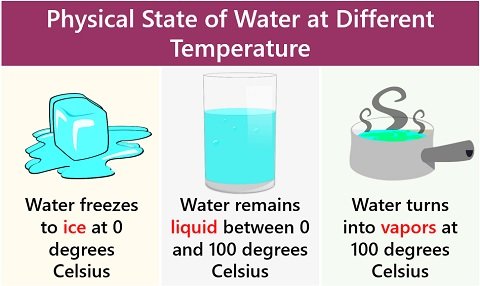 We have observed that the ice melts when taken out from the freezing temperature. Let us understand the mechanism of ice melting for which you need to drop ice into the warm water.

Then the energy flows from the liquid water to ice due to the high temperature of liquid water. Ice absorbs this heat, and eventually reaches the melting point.

Now, the temperature will not increase at this point, but the attractive forces or hydrogen bonds of ice begin to break that hold up the rigidity of ice molecules.

Therefore, the melting of ice is an example of a phase transition from a solid-to-liquid phase due to the breaking of hydrogen bonds.

If you will heat or boil the water, the kinetic energy of liquid molecules increases. The liquid water reaches the boiling temperature, where water molecules from the liquid phase escape into the atmosphere or enter the gas phase.

It finally results in a steam or vapour formation. This process is also called evaporation that can occur in both open and closed systems.

Thus, the boiling temperature is the temperature at which a liquid phase transits into a gaseous phase. Here, one important thing to note is that the liquid’s vapour pressure becomes equivalent to the atmospheric pressure.

Through this process, solid water directly transits to a gaseous phase passing over the liquid phase. It is a reverse of the deposition process and a generic term representing a solid-to-gas transition.

It is an example of an endothermic phase transition that requires energy from outside. Dry-ice and naphthalene balls are examples of solid-gas phase transition, which sublimes at room temperature.

Let us understand the mechanism of freezing or liquid-to-solid transition. When you keep the glass or bowl of water in the freezer, the kinetic energy or heat from the water starts decreasing.

Then, the molecules adhere and acquire a compact arrangement due to the hydrogen-bond formation. Therefore, freezing temperature is a temperature at which the liquid phase transits into a solid phase.

It is a reverse of the evaporation process. Here, the gaseous state of water undergoes condensation to form liquid water. Thus, it is the gas-to-liquid transition. Condensation occurs when the temperature of the air falls to its dew point.

We have frequently seen a layer of water droplets over the surface of cars, leaves or many objects in the morning because the temperature falls below the dew point during the nighttime.

Condensation may also occur when the air becomes fully saturated with water vapour. Cloud is a common example of the condensation phase, which forms when the water vapours in the atmosphere condense into small masses of water droplets.

It is a reverse of the sublimation process and is also called desublimation. Here, the gaseous state of water transits into a solid phase of water, passing over the liquid phase.

Deposition occurs when the gaseous particles in the atmosphere meet a temperature below 0 degrees Celsius. We can understand the mechanism of gas to solid transition by taking the example of frost formation.

You can see frost or tiny ice-like crystals over some surfaces, resulting from the water vapours coming in contact with the cold surfaces.

Phase transition in water serves as the basis of the hydrologic cycle that facilitates the continuous circulation of water from the ground to the atmosphere. It involves six processes that may or may not require energy.