The citric acid produces at the commercial level because its use has been constantly increased the human consumption by 4% each year and it is having high demand in food, pharmaceuticals and some other industries like cosmetics, toiletries etc. In the year 1826, the commercial production of citric acid was first achieved by the John and Edmund Sturage Company, UK.

The production of citric acid can define as the process in which a citric acid can be derived by two methods like:
Natural process: Produce naturally from the citrus plants like lemon, orange etc.
Synthetic processes: Includes chemical synthesis of citric acid by the enzymes and biological fermentation by the microorganisms.

What is Citric Acid?

Citric acid can define as the most common weak organic acid which was derived from the Latin word “Citrus”, which includes all the species of genus Citrus. Lemon, orange etc. are the best examples of having citric acid as the major constituent. 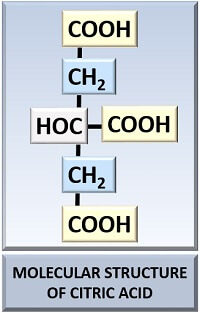 Properties:
The citric acid shares all the properties which are mentioned below in the table.

1874: Karls Scheels was the first scientist who isolated the citric acid from the lemon juice by the process of crystallization.

1880: Grimoux and Adams were the two scientists who introduced the synthesis of citric acid from the glycerol.

1893: Wehmer carried out fermentation by taking Penicillium gaucum, where they observed the accumulation of citric acid as the by-product of calcium oxalate.

1917: Currie reported that the Aspergillus niger can give more yield for the citric acid production at a high rate in the sugar-based medium.

1922: Millard observed the accumulation of citric acid in the Aspergillus culture by limiting the nutrients in the bioreactor.

1984: Abould Zeid and Ashy introduced the “Submerged fermentation technique” in the U.S. for citric acid production.

Production of citric acid can be accomplished by two methods like 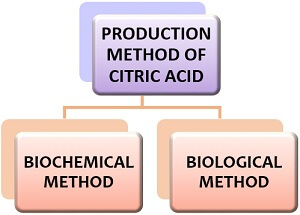 In defective Kreb’s cycle, a high amount of sugar is transported through the BMP pathway that forms acetyl CoA. The acetyl CoA condenses with oxaloacetic acid to yield “Citric acid” by the help of an enzyme “Citrate synthetase”.

Therefore, for the production of citric acid, the enzymes of the Kreb’s cycle must be deactivated like an enzyme Aconitase/ Isocitrate dehydrogenase which can further break down the citric acid. 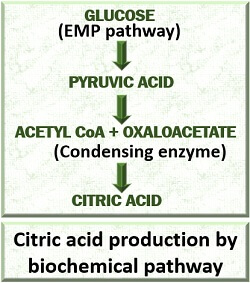 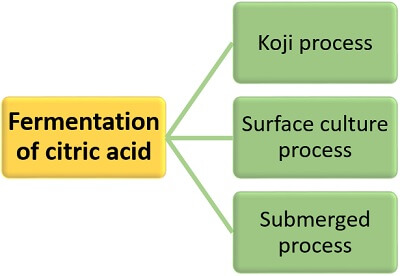 It also refers to as “Solid-state fermentation”. The koji process was first introduced in Japan. It is related to the use of agro-industrial residues for citric acid production. In Koji process, raw materials like apple pomace, sugar cane, beet molasses etc. can be used. These raw materials are utilized by the Aspergillus niger.

At last, the citric acid is extracted from the fermentation tank. The starch content of the raw material is degraded into citric acid by the amylase enzyme of the Aspergillus niger. The koji process does not require the substrate pre-treatment because the trace elements do not affect the production of citric acid.

After the utilization of sugar content by the mould, the remaining liquid is separated from the mycelial mat. In the surface culture process, a small amount of citric acid is produced as the primary metabolites by the A. niger.

For carbon source, substrate like beet molasses, corn starch etc. are used as a substrate. For the nitrogen source, ammonia is used. The substrate used in this method requires pre-treatment like the addition of nutrients, sterilization etc.

The A. japonicus is inoculated into the culture medium and maintained at 30degrees Celsius. Submerged fermentation is mostly carried out in a batch bioreactor in which 1500kg of citric acid and 500kg of biomass can be produced from the 2500kg glucose and 860kg of oxygen. 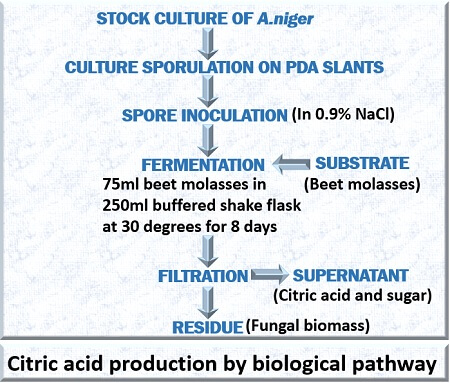 The product formed after fermentation is the fermented liquor looks hazy due to the presence of antifoaming agents, mycelia etc. Therefore to separate these things, a slurry of calcium hydroxide i.e. Ca (OH)2 to form a precipitate of calcium citrate. 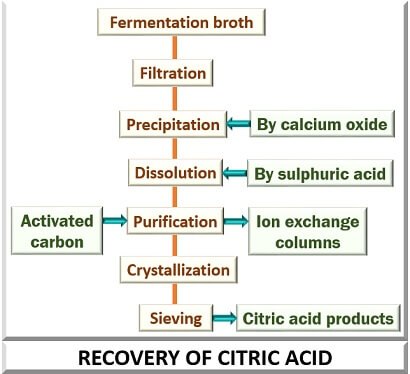 The solution obtained from this is subjected to the circulating crystallizers. The crystals formed as a result of crystallization are then removed by centrifugation. After the completion of these steps, the remaining solvent is dried, sieved and then packed. The remaining mother liquor is again recovered by the same process.

The production of citric acid is necessary for its versatile uses in the different fields that are given below:

There are some factors which can directly or indirectly affect the production process or the fermentation of citric acid.

For most of the industrial production, carbon sources like glucose and sucrose are recommended as they provide a good source of carbon for the growth of the biomass. Galactose acts as an alternative source of glucose and sucrose, but it allows low microbial growth and thus not favours the cumulation of citric acid.

Other carbon sources like cellulose, starch etc. allows limited growth and may slow down the growth rate of the microorganisms, which will lead to minimal production. The optimal sugar concentration ranges between 10-14% and the sugar concentration below 2.5% will not produce citric acid.

Ammonium salts like urea, ammonium sulphate etc. results in a decrease in pH, which is crucial for citric acid production. The nitrogen concentration must be in between 0.1-0.4 N/L. High nitrogen source will increase the microbial growth which will consume more sugar and in turn decrease the yield of citric acid.

For the best production and growth of fungi, potassium dihydrogen phosphate is considered best for the phosphorous source. The concentration of phosphorous must be in between 0.5-5.0 g/l for the maximum yield. If phosphorous present in excess, it leads to the production of sugar acids which will decrease the carbon dioxide fixation and thus, stimulate the fungal growth.

Divalent metals such as iron, zinc, manganese, copper etc. produce at the time of fermentation. If KH2PO4 is added to the zinc, it favours the production but the trace elements like manganese, iron, and high concentration of zinc leads to a reduction in yield.

Lower alcohols like ethanol, methanol etc. enhance the citric acid fermentation. The concentration of lower alcohol must be in between 1-3%. Ethanol activates the activity of an enzyme “Citrate synthetase” double the time by decreasing 75% of Aconitase activity. Coconut oil if added about 3%, it also influences the production. Lower alcohols not only stimulate the citric acid production but also promotes the sporulation of microorganisms.

The pH of the culture medium is directly related to the growth of microorganisms and their metabolic activities. A pH changes to acidic by the microbial activity, like for Aspergillus, the pH drops to 3.0. The pH below 2.0 is optimal for the production of citric acid and a pH of 2.2 is best for the growth of mould.

Aeration increases the dissolved oxygen concentration in the culture medium and thus increases the yield of citric acid. The aeration system also reduces the fermentation time. The concentration of oxygen must be above 25% saturation. At the starting of the process, it must be 0.1-0.4 vvm otherwise it can produce excessive froth in the culture medium.