50-S and 30-S are the large and small subunits of bacteria that colloquially constitute the 70-S type of ribosome. Here, a letter ‘S’ denotes the Svedberg unit, which measures the sedimentation coefficient of the ribosome in an ultracentrifuge.

Ribosomes in prokaryotes exist as the inclusion bodies within the cytoplasmic matrix, which appears as the granular, dense and complex structures made of RNA and protein. It holds 35% of proteins and 65% of ribosomal RNA. Ribosomes are the universal membrane-less organelles that are common in all the groups of living organisms.

Prokaryotes lack specialised cell organelle, so the ribosomes are associated with the cytoplasmic membrane, unlike ribosomes associated with ER in eukaryotes. The presence of ribosome is obligatory for all the cells to synthesise proteins or to translate mRNA into proteins. 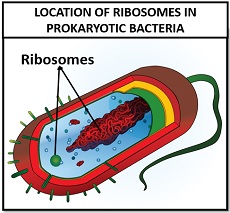 Ribosomes in prokaryotes are of a 70S type or contain two subunits. 30-S denote the smaller subunit, and 50-S represent the larger subunit. Ribosomal subunits are large nucleoprotein particles, which possess both nucleic acid (RNA) and several proteins. Generally, the molecular weight of ribosome is nearly 2.7×106 Daltons. 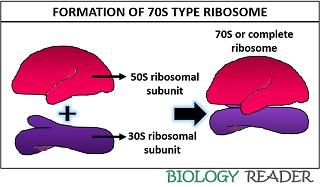 Both the subunits then conjoin to configure a complete 70-S ribosome at the time of protein synthesis. The 70-S type of ribosomes are 25nm wide, and its number per bacterial cell is about 15,000 ribosomes.

Both 50-S and 30-S type of subunits possess three sites for the association of tRNA:

As we know, ribosomes are the manufacturing units which ensures the synthesis of protein. Both the 30S and 50S subunit equally plays a fundamental role during the translation of mRNA into protein. The 30S subunit performs a vital role in the association of anticodon site of the adapter tRNA molecule to the mRNA strand transcribed from the DNA.

It also regulates the base pairing of the mRNA codons and tRNA anticodons during the decoding process. Therefore, 30S subunit also accounts for the accuracy in the base-pairing during translation.

The 50S subunit performs a significant role in the binding of the acceptor arm of tRNA. Then, the tRNA initiates the polypeptide chain formation relative to the information provided in the mRNA. It pairs the incoming amino acid on A-site tRNA and the nascent peptide chain attached to the P-site tRNA. 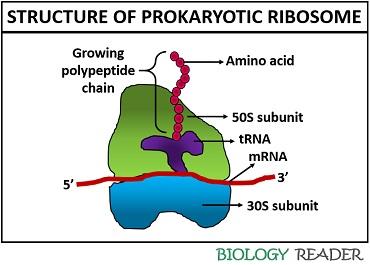 The individual role of the 30S and 50S subunit is explained below:

30S subunit: It provides the binding site for the incoming transcribed mRNA. Also, the smaller subunit of prokaryotic ribosome ensures specific base-pairing between the codons and the anticodons on the mRNA and tRNA, respectively.

50S subunit: The larger subunit of prokaryote mediates the peptide bond formation during the peptidyl transfer reaction. It also acts as the site of inhibition for many antibiotics, including macrolides, chloramphenicol, clindamycin, and the pleuromutilins.

Moreover, it prevents premature polypeptide hydrolysis. It also functions as a region, to which G-protein factors can bind that regulates initiation, elongation, and termination. Besides this, 50S subunit also helps in the protein folding after the translation. The 50S subunit possesses a peptidyl-transferase activity site, which forms the peptide bond.

The ribosomes are large RNA-protein complex, and it plays a crucial role in the study of RNA, proteins and antibiotic interaction. Through the structure of the ribosome, we can study the RNA structure and its interactions with proteins. Many antibiotics interact with the ribosomes to inhibit the process of translation.

Hence, the role of antibiotics targeting ribosomes can also be studied for medical reasons. The primary function of a ribosome is to facilitate the binding of mRNA with tRNA during translation or protein synthesis. Proteins being basic building blocks of all the living cells, so its synthesis is necessary.