Protein denaturation is the deformation of a protein’s shape through some external stress. The external stress can be due to extremes of physical (heat, radiation etc.) or chemical agents (acids, alkalies etc.).

Denaturation in proteins is simply the unfolding of proteins due to the breakage of the bonds holding them. It significantly distorts the protein’s structural conformation. However, the amino acid sequence in proteins will not change. So, denaturation does not hamper the protein content or the nutritional values.

Based on structural complexity, proteins exist in primary, secondary, tertiary and quaternary structures. Except for primary proteins, all the proteins can be denatured via extremes of physical or chemical agents.

Proteins in their native states are the most functional and biologically active. Any physical or chemical change in native proteins leads them to lose their shape and biological activity and are called denatured proteins.

Do you know what proteins are? They form by the polymerization of different amino acids. To explain protein, we can take a reference of protein as a garland, in which the amino acids act like beads.

To understand “Denaturation”, let us break the term into ‘De’ and ‘Naturation’. The former means removal, and the latter means natural. So, we can define protein denaturation as the process in which the protein loses its natural or original characteristics.

Technically, protein denaturation is a biochemical process that refers to any structural deformation of the native protein by physical or chemical changes. A native protein has a complex, rigid structure and is functionally active.

Denaturation can be seen only in the proteins’ quaternary, tertiary and secondary structures. It results in the loss of biological activity, making the protein functionally inactive.

Note: Denaturation only disrupts the covalent and non-covalent bonds in the protein. But, it does not distort the peptide bonds. So, always remember that protein’s primary structure remains intact even after denaturation.

As the post is about protein denaturation by heat, let’s discuss some examples.

On boiling, the physical state of eggs changes due to the coagulation of egg proteins. Most of the egg proteins in the egg white or albumin denature at a temperature of 60°C or above. On boiling, the albumin turns into a white, opaque and jelly-like substance. Thus, changes in viscosity and colour reflect the denaturation of egg albumin proteins. 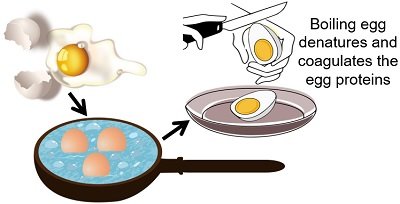 Autoclaving or steam sterilization is a popular method of killing microbes and their spores. At 120°C temperatures, the steam generates moist heat. This heat is sufficient to denature the microbial proteins, making them functionally inactive. 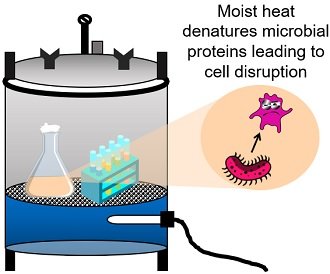 Drying and Styling of Hairs

Keratin is the primary protein found in the hair cortex. We know that the frequent usage of hair dryers and hair styling devices damages the hair.

Temperature above 140°C alters the shape of keratin strands from α-keratin to β-keratin. Due to this, hairs lose elasticity, and the hair shaft weakens, leaving it prone to damage. 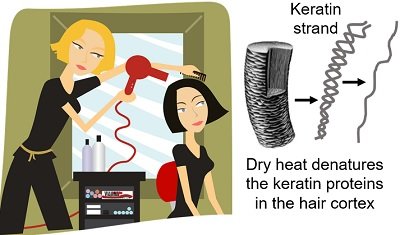 Different alpha amino acids function as bricks to build the protein. So, protein is a polymer or polypeptide of more than 50 amino acids.

Several forces are responsible for holding up the native structure of the protein. Hydrogen bonds, ionic interactions, disulfide bridges, and hydrophobic interactions are the covalent and non-covalent forces stabilizing the protein structure.

Eventually, the rigid, folded, stable conformation of protein will unfold. Denaturation is associated with alterations in properties like physical, biological and chemical properties. Following are the changes resulting from thermal denaturation:

Depending upon these changes, denaturation can be irreversible or sometimes reversible.

Renaturation is the reversal mechanism of denaturation. It allows the reconstruction of disrupted proteins to their original state.

But, the nutritional values remain intact, or the protein content will not change. So, protein denaturation is significantly important for us, as the enzymes in our digestive system find the denatured proteins easy to digest.