Protoplasm is a term used to indicate the living matter of the cell which includes the cytoplasm and the nucleus. It is a colourless colloidal suspension of lipids and proteins in water. It was put forward in the year 1835 and was primarily considered as the ground substance of the cell.

But these days, two separate terms, i.e. cytoplasm and nucleoplasm, are used to represent the two major divisions of a cell. A selective membrane surrounds the protoplasm (in eukaryotes), whereas in prokaryotes it is surrounded by a selective cell membrane, cell wall and sometimes capsule.

Protoplasm refers to the living matter of the cell, which is a collective term used for the combination of cytoplasm and nucleoplasm. It is the protoplasmic fluid, which comprises nucleic acids, various proteins, lipids, carbohydrates, inorganic salts and water droplets. 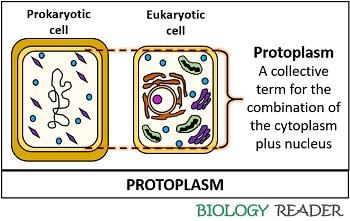 Components of the Cell Protoplasm

In eukaryotes, the protoplasm has two major divisions, i.e. cytoplasm and nucleus.

The cytoplasm is the primary element of the cell protoplasm, which constitute a significant part of the cell. It is a fluid that contains both suspended and dissolved living matter. Cytoplasmic organelles like mitochondria, Golgi body, ribosomes etc. are found within the cytosol.

A cytoplasm includes 90% of water, 7% proteins, 2% carbohydrates and 1% inorganic minerals. It provides a favourable environment for many biochemical reactions and life processes. There are three main properties of cytoplasm:

Watery: A cytosol comprises a transparent or homogenous fluid, which absorbs the light to make the organelles visualize to us under a light microscope. We can suppose a live example by taking a glass of water and a glass of milk. If we add any solid substance like a pin, then we can easily visualize the pin in water instead of milk.

Motion: The organelles of a plant and animal cell are in a continuous moving state because of the fluid nature of the cytosol.

A cell nucleus is the second component of the protoplasm, which is the control unit of all the eukaryotic cells. It contains a heritable material within, which is transferred from the parent cell to the daughter cells.

All the life processes like growth, reproduction, metabolism etc. are controlled by the genes found within the chromosome content of the nucleus. It primarily comprises a nucleoplasm, which is encircled by a nuclear membrane. 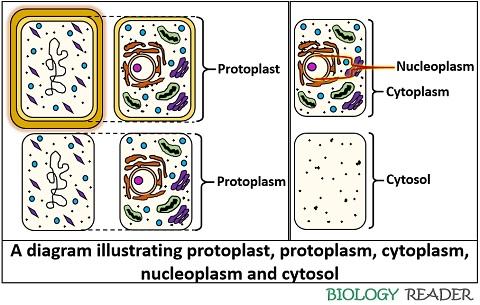 This theory explains that the protoplasm is the physical basis of life. It is an improved theory over the cell theory given by the scientists named, Schleiden and Schwann.

After this, a more advanced Organismal theory was proposed by Sachs, which explains that organisms are the basic unit of life.

A cell protoplasm has many fractions or subcompartments, which significantly perform the distinct task and serve as the moving and the reproducing apparatus.

A protoplasm is compartmentalized into discrete structures that mediate specific tasks within a cell. We can understand this by taking some of the examples:

Therefore, the compartmentalization within the cell is a prominent feature of eukaryotes and uncommon in prokaryotes. The intracellular structures or compartments are mainly known as cellular or cytoplasmic organelles.

Hence, the organelles within the cytoplasm of a eukaryotic cell show a division of labour, in which each compartment is specialized to do specific tasks.

The double-layered membrane bounds some cell organelles like the nucleus, ER, Golgi apparatus, mitochondria and plastids. A few of the cell organelles are bound by a single membrane (lysosomes) and a non-unit membrane (ribosomes and centrioles).

A protoplasm has a considerable carbon content, which functions as the basic building block of the cell. The carbon content is harnessed by a cell to produce complex molecules and macromolecular complexes, which are required for the regular function of the cell.

Inside the cytoplasm, the micromolecules polymerize to form complex macromolecules, which in turn assemble to form a supramolecular structure.

Later, these structures constitute the formation of macromolecular complexes and intracellular organelles, which create a complete, functional cell.

The formation of the cell from the cellular components is called the molecular hierarchy. A plant cell can prepare fresh protoplasm by using the mineral compounds. Animals are obliged to procure it readymade through the plants.

The process of movement is common in animals, but plants use different mechanisms to move. The movement in plants can be artificially induced by some physical and chemical means, or it can occur spontaneously by the protoplasm.

The protoplasmic movements by the plant cells are considered “Vital movements“, which occurs due to the irritability and contractibility of protoplasm, like an animal cell.

Therefore, we can conclude that the cell protoplasm is the organization of discrete compartments, which may or may not possess a nucleus.

Protoplasm is simple (in prokaryotes) and complex and nucleated (in eukaryotes). The cellular contents of the protoplasm provide all the elements, which are necessary for cell growth and development.