Sense of smell is one of the senses processed by our nervous system to let us know more about our surroundings and the things we consume to keep the body healthy and safe. The sense of smell is a set of information coming through the nose.

The sensory organ comprises specialized cells and tissues that primarily recognize odourants and transfer them to nerve endings of the olfactory nerve. Finally, the nervous system processes all the information.

The brain interprets the signal as smell (olfaction). The sense of smell relates us to know more about our surroundings and gives us instincts about what is safe or dangerous.

This post introduces the human sense of smell, the meaning of smell, and the smell detection mechanism. The meaning of olfaction and the unique characteristics of olfactory receptors have also been explained. You will also get to know the facts and examples in this context.

A sense of smell is one’s ability to perceive the odour of things in the surrounding through the nose. The sense of smell or an olfactory sense enables us to detect pleasant, unpleasant, or odourless things. Our sense of smell is a chemosensory mechanism that detects chemicals in the air via the nose (sensory organ).

Evaporation of the air with chemicals or odourants occurs into the olfactory epithelium. The olfactory nerve contracts and triggers an electrical response. Then, the signal moves along the path of the olfactory tract to the olfactory bulb that processes signals concerning memory and emotion. Finally, the signal reaches the neocortex region of the brain that interprets the kind of smell we perceived.

Smell or odour refers to the odour molecules (mixtures of light and small molecules) filled within the air and released by volatile materials. An odour comes out of the substances that release volatile chemicals (in low concentrations) into the air, which can be perceived as a sense of smell. 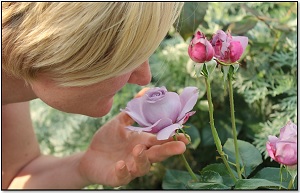 Example: Different dishes contain different spices that can give off many odour molecules. Our brain can piece together all this information and let us know which kind of dish is being cooked.

As we all know that few things smell, while others don’t. The reason is that the smell comes out of the substances that give off particles into the air.

Olfactory receptors recognize the odourants or volatile chemicals mixed with the air. A single odorant molecule shows varying affinity to attach with many olfactory receptors, depending on their physio-chemical properties.

Therefore, the chemical information of the odourants converts into electrical information during olfaction. The brain easily interprets the signals into information. The pathway of chemical signals to the brain is also linked with the regions (amygdala and hippocampus) of emotion and memory.

The sense of smell can change how we feel or what we think. This is why some people have a good sense of smell, while others have no sense of smell (anosmia). Smell loss imposes a big impact on our psychological well-being.

Our nose acts like a chemosensory organ that comprises numerous nerve endings that act differently on a particular type of chemical. While we inhale, different chemicals within the air drawn into our nasal cavity. Odourless or non-volatile chemicals don’t cause the nerve endings to contract or do not bring any response.

In contrast, volatile chemicals in the air will cause the contraction of many nerve endings in our nasal cavity, which fire signals towards the brain. Our brain first interacts with the memory centre and alternatively tells us whether the smell that we sensed is familiar or unfamiliar. 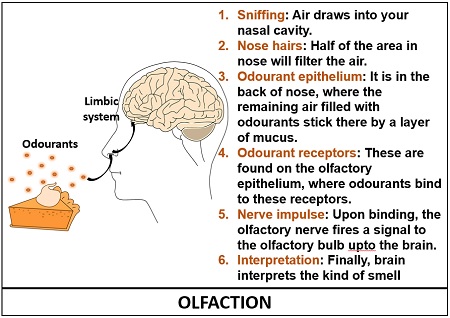 Therefore, the olfactory sense is a protective mechanism through which we can judge the potential illnesses from the things we consume and utilize by knowing the pleasantness or unpleasantness of odour.

Odourant receptors (millions in number) are present on the dendrites of the olfactory sensory neurons. One characteristic feature of olfactory receptors is that they possess thin hair-like olfactory cilia. These hair-like filaments float in the nasal mucosa and detect odorants. After recognizing the presence of volatile odourants, the olfactory receptor activates and conducts an electrical signal to the brain about the odour.

Amygdala and hippocampus are the regions of the brain controlling the emotions and memories of a person. Therefore, your brain can remind you of some good and bad experiences associated with particular smells, which are called “olfaction-associated memories”. The smell goes through the olfactory bulb to the brain’s limbic system that controls mood, memory, and emotion.

Like other senses, a sense of smell is also essential to maintain psychological wellbeing, through which we connect with the things around us. Smell loss is a medical condition called anosmia that imposes a profound impact on our lifestyle.

Anosmia patients may partially or completely lose their sense of smell, resulting from inflammation or blockage in the nose, head injury and viral infection. It is also termed smell blindness that can affect one’s ability to form and maintain close personal relationships and sometimes lead to depression.

As discussed earlier, the smell is psychologically linked with memory and emotion, and its loss can affect your sentimental pathway to memories. We have never received much attention to this medical condition until researchers studied the effects of the impaired olfactory system.

Smell loss is an early sign of symptoms in people with Parkinson’s and Alzheimer’s disease. According to a recent study, smell loss can also be an initial or later symptom in patients suffering from the covid disease.