The difference between the food chain and the food web is mainly due to the network of links and the number of trophic levels the organisms form in the different ecosystems.

A food chain is a one-way pathway that includes a linear network of linking organisms. In contrast, a food web shows a complex network where many food chains altogether show the interrelation of organisms.

A trophic level depicts energy and nutrient flow in the ecosystem, generally in a sequence from producers, consumers and finally to decomposers. A food chain generally represents 4-5 trophic levels starting from the producers (green plants), consumers (herbivores, carnivores, omnivores, predators) to the decomposers (fungi and bacteria).

In contrast, a food web connects different food chains or the organisms distributed at different trophic levels of our ecosystem. Each link in the food web is connected to at least two other relative organisms.

It refers to a one-way representation of the energy transfer between the organisms from the lower to the higher trophic level organisms. It simply makes us understand that who-eats-whom. The organisms are grouped into three trophic levels in a food chain, namely producers, consumers, and decomposers. Thus, the food chain represents a single chain or a sequence of events where the higher organism feed on a single type of lower organism and producer. 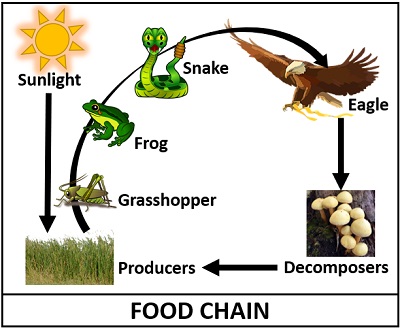 It refers to the geographical representation of the ecological community that represent the combination of interconnecting food chains. The food web shows different kinds of ecosystems (terrestrial and aquatic) altogether to give us an idea about the competitiveness and adaptability of the organisms belonging to different trophic levels. Thus, the food web represents multiple food chains where the higher organisms feed on various lower organisms and producers. 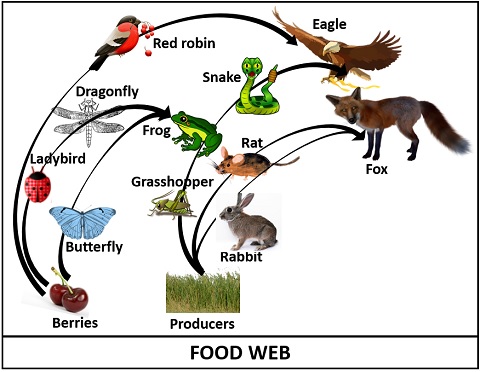 The distribution of organisms at a trophic level is the same in both the food chain and food web, which we will discuss below.

Organisms in a food chain and food web are distributed at different trophic levels, as explained below:

They are autotrophic plants, which get energy from the sunlight and minerals or nutrients from the soil. Therefore, the first trophic level includes all the autotrophs and photosynthetic single-celled organisms, which primarily carry out photosynthesis to form organic food “glucose” by using sunlight, carbon dioxide, and water. Seaweeds and phytoplanktons in the aquatic habitats are also autotrophs.

They include organisms that feed upon the producers and constitute the second trophic level.

Carnivores and omnivores are the two common groups of consumers. Carnivores feed upon the other animals, while omnivores are the animals that feed upon both plants and animals. Lions, tigers, foxes and eagles behave like carnivores. Human beings are the best example of omnivores who consume plant sources (vegetables and fruits), animals or animal products (meat, milk, and eggs) and mushrooms (a form of fungi).

They represent the third trophic level of the food chain that eat the plant and animal remains like vultures eat dead animals. Decomposers (fungi and bacteria) complete the cycle of life by turning out the organic wastes of plants and animals into inorganic materials that in turn used up by the plants. Thus, they start a whole new food chain.

Energy Transfer Between the Trophic Levels

Net production efficiency (NPE) accounts for the organism’s ability to utilize the energy into biomass or their efficiency to fuel the organisms of the next trophic level. Gross primary productivity refers to the efficiency of producers to generate biomass.

Oppositely, net primary productivity accounts for the remaining energy available for cellular respiration. Lower trophic organisms or prey’s bodies get most of the energy and nutrients.

Due to competitiveness between different organisms, the energy transfer is inefficient for the higher organisms, thereby limiting the food chain’s further flow. Some part of the energy is stored as biomass or cellular energy in a food chain. Nearly 10% of energy reaches the next trophic level.

In a food chain, energy loss occurs in the form of metabolic wastes and metabolic heat. Thus, the fractions of energy transfer generally last three to six trophic levels, as only a little energy flow supports higher trophic organisms.

Therefore, for the stability of an ecosystem, energy needs to be transferred. By the end of the food cycle, decomposers recycle the nutrients into the soil that plants can use.

Therefore, we can conclude that the food chain and food web represent the food cycle of our ecosystem. Organisms depend on each other for survival. The survival of organisms depends upon the nutrients and energy they harness from the organisms of lower trophic levels.

However, 80-90% of energy loss occurs as heat dissipation. The remaining 10%-20% of the biomass passes to the next organism. On each transfer, the biomass decreases by the increasing entropy.

1 thought on “Difference Between Food Chain and Food Web”