Transpiration in plants is a process of water loss (in the form of water vapours) into the atmosphere from the leaf surface and stems. Plants undergo transpiration primarily to access carbon dioxide needed for photosynthesis and to cool themselves. As the plants are immobile, they manage their water needs by the two fundamental processes like water absorption and transpiration.

Definition of Transpiration in Plants

Plants use nearly 5% of the water to fulfil their basic needs like food preparation and other cellular activities. Thus, a plant releases much water or transpires more because transpiration helps in:

It refers to the driving forces of the environment like humidity, light, temperature etc., that aid in expelling water from the plant components like stomata, cuticle, lenticels etc. A driving force is a potential difference between the soil and the atmosphere surrounding the plant.

There are stomata, cuticle, and lenticel resistances in a plant that restrict the water movement from the leaf into the atmosphere. Thus, a transpiration rate strongly depends upon the driving forces of the environment and the resistances of a plant. Transpiration rate is generally equated as:

Process of Transpiration in Plants 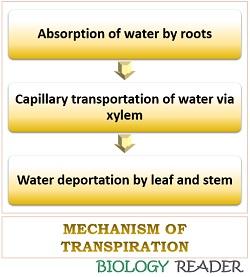 It includes the stomatal, cuticle and boundary layer resistance, which decides the rate of transpiration. 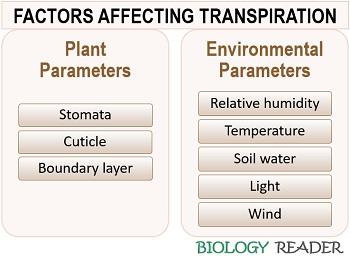 Stomata: These are the pores found on the leaf surface and surrounded by the guard cells. It promotes gaseous exchange. A guard cell allows the exchange of gases by opening and closing activity and controls the water flow during transpiration. The greater number of leaves results in a higher number of stomata, thereby facilitating a high transpiration rate.

Cuticle: It exists as a waxy layer present above the leaf epidermis layer and acts as a barrier to the water movement out of leaves. Cuticle being waxy repels water and allows water vapours to enter.

Boundary layer: It refers to the thin layer of stagnant air surrounding the leaf surface, which varies with different plant species. At the time of transpiration, water vapours should diffuse from the boundary layer to the atmosphere.

With an increase in the boundary layer thickness, the transpiration rate slows down. Therefore, plants with hairy structures on their surface or large leaf size possess a more substantial boundary layer.

It includes environmental factors like relative humidity, light, temperature etc., which can affect the driving force of the water loss.

Soil water: Soil also provides the source of water to carry out the transpiration process. If a plant contains a sufficient amount of soil moisture, it will transpire at higher rates through the continuous water supply from the soil via root hairs.

Light: Stomata tends to open in the presence of light, which allows the entry of available carbon dioxide for photosynthesis. In the absence of light, most plants have a closed stoma. Therefore, light is needed in the transpiration process to trigger the stomata for facilitating the gaseous exchange between plant and environment.

We can understand the concept of transpiration by performing a simple experiment by taking a well-potted plant. To prevent water evaporation, cover the plant with a polythene sheath and tie it with a rope. 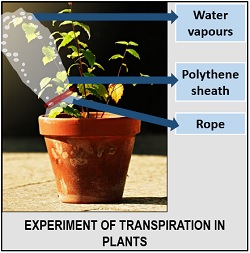 Transpiration is an important event, during which a plant releases out the excess water by the various plant resistances like stomata, lenticels etc., through the driving environmental forces. Therefore, transpiration is an expulsion of water from the plant surfaces (via leaves and stems) in the form of vapours (condense in the atmosphere).

1 thought on “Transpiration in Plants”