Soil structure and texture are the physical properties that influence soil retention, drainage system, and aeration capabilities. It also defines the movement of air, water and ions within the soil, which affects other factors like seed germination, root growth, and erosion processes.

It refers to the process of soil formation that is separated by the six distinct layers or horizons. Let us look into the diagram given below and understand each layer of soil in detail. 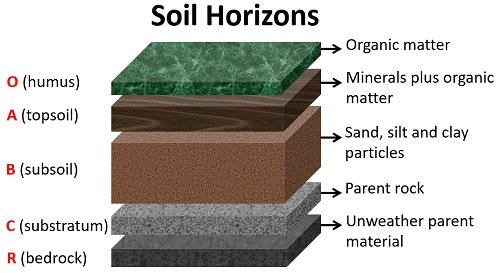 It refers to the aggregation of the soil components (sand, silt and clay) with the larger units (organic matter, iron oxides, carbonates etc.). Thus, the aggregated soil particles contribute to the soil structure, which is called the ped. Soil structure is influenced by soil moisture, microbial flora, organic matter and root growth.

Soil structure is generally classified based on the following factors:

Based on the Ped Structure and Arrangement 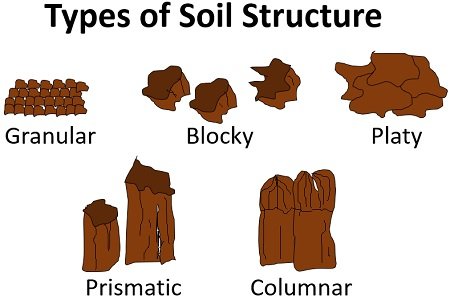 Based on the Ped Size

It defines the soil strength and integrity by the property of aggregation or cementation within the peds.

Small pores or micropores reduces the water and mineral retention capacity. The soil is typically classified into two types, depending upon the pore size of the soil particles.

Pore spaces refer to the spaces between the soil aggregates. Water and air occupy the pore spaces. Water content is inversely proportional to air content. Soil porosity is determined by the size and arrangement of the soil particles.

Soil possess interstitial spaces. It increases with an increase in organic matter and decreases with the decrease in pore spaces and soil depth. Soil porosity promotes plant growth, as it entraps requires water, air and minerals.

Soil porosity represents the percentage of the soil volume. We could determine the soil porosity if the values of particle density and bulk density are known. The average soil density is 2.65 grams per cubic centimetre. Soil density varies in different types of soil.

By knowing the particle density, we could calculate the specific gravity of soil particles by the given equation:

Thus, soil porosity can be calculated by the given formula:

It refers to the soil proportion, which separates the three significant components like sand, silt and clay. Their relative proportion and size differ in soil. Soil texture is also a property through which we could classify the soil type.

Sand and silt hold quartz and other inactive minerals or considered “Inactive part” of the soil horizons. Oppositely, clay is considered an “Active-part” of the soil matrix, as it provides active absorption of water and ions due to its small particle size and large surface area.

Sand and silt are formed by weathering of the parent rock. Clay is formed through the precipitation of the dissolved parent rock. Soil texture also influences soil porosity, permeability and water-nutrients holding capacity.

The specific surface area increases exponentially, starting from the sand to clay, which increases the soil’s adsorption phenomena along with the other properties like soil plasticity and swelling.

Based on the percentage of the textural components, there are 12 textural classes of soil.

We could determine the pore size and the specific surface area of the textural components (sand, silt and clay). Small particles provide more surface area for the water and nutrient absorption by the soil, which supports plants growth and provides a favourable atmosphere for the soil microflora.

A large surface area between the particles also aids in ions movement into the soil, which helps soil aggregation or binding of soil particles. We could determine the soil consistency by knowing the moisture content in the soil structure.

Soil physical properties like soil structure and texture perform a significant role in regulating plant growth responses, by providing water and ions required for the plant cellular activities. Besides that, soil structure and texture also have a control over the other properties like water runoff, water retention, nutrient loss and soil erosion properties. Inorganic particles, organic matter, pore spaces and the soil microflorae make up the mineral-based soil.