Spores are the single-celled structures. These are formed during the unfavourable conditions. They can survive in a harsh environment. Spores are highly resistant structures, which can withstand harsh conditions like high temperature, pH, salt concentration etc. Spores exist in variable shapes, sizes and numbers.

The process of spore formation is called sporulation, and the phenomena where it germinates to form new vegetative bodies is called spore germination. These are unicellular structures and produced by the sporophyte through meiotic cell division.

These are the reproductive structures that form in the life cycle of many plants, fungi, bacteria etc. Spores disperse through the wind or air current. In this context, we will discuss the different cytological events or life cycle of a spore along with its definition, types and structural components.

Spores can be defined as the reproductive structures, which are usually single-celled. It provides the asexual means of reproduction, in which the spores do not need to fuse, unlike gametes. Thus, the spores are generally haploid cells that are produced by meiosis. In its dormant state, the spores are highly resistant to adverse conditions. Spores form new individuals through mitotic cell division once they germinate. 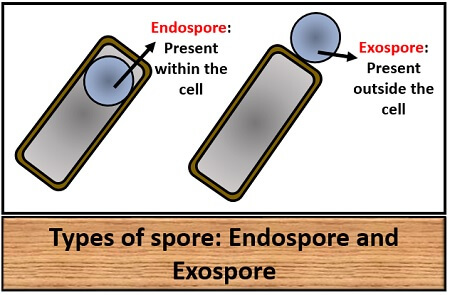 It consists of the following structural components, which you can see in the diagram that is given below. 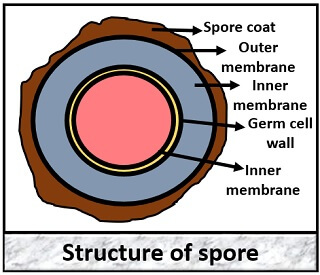 The life cycle of spores involves the following three events:

It is the phenomena of the spore formation by the vegetative cells. Sporulation is also called “Sporogenesis”. 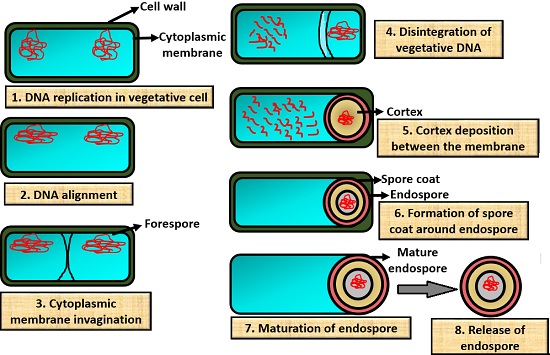 Sporulation of exospore: Exospore forms outside or on the vegetative cell surface. Exospores sporulates through the following steps, which are given below: 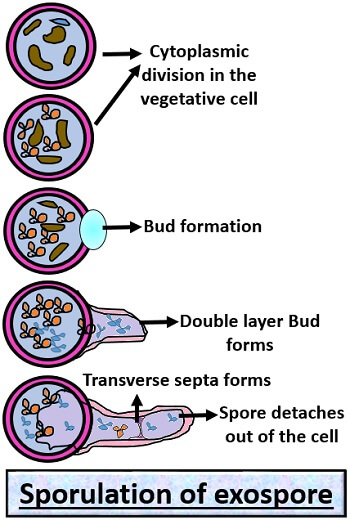 It is the mechanism that prevents the germination of the spore into a new vegetative cell, during the unfavourable conditions. Dormancy is subdivided into the following two types:

Dormancy of spores is generally a stage, in which a spore remains in a resting or dormant state, where it is metabolically inactive. The dormancy is characterized by no cytoplasmic movement and decrease or no metabolic activity. Some internal and external factors can affect dormancy.

Endogenous dormancy: This kind of dormancy is due to internal factors like:

Exogenous dormancy: This kind of dormancy is due to external factors like temperature and pH variation, desiccation, the absence of light etc.

On the return of favourable conditions, the spore germinates or revert to the vegetative state, and the phenomena called germination. It involves the following three steps: 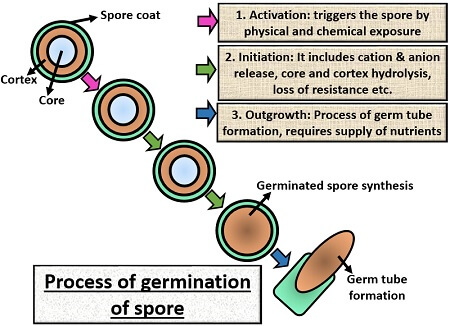 Activation: In this, the spores are activated or triggered by certain physical or chemical exposure to the spore coat. The agents that trigger the spore involve heat, abrasion, low pH and chemical compounds that contain free sulfhydryl radicals or groups.

Initiation: It is characterized by:

Outgrowth: It is the final stage of the spore germination, where a cell prepares itself for a division. This stage requires an adequate supply of essential nutrients for cell growth.

Therefore, all these events like sporulation, dormancy and germination take place in the spore cycle, in which a spore first sporulates, then remains dormant for some time and then germinates into a new vegetative cell through the germ tube.