Bacterial isolation basically involves specimen collection, preservation, culturing and microscopic examination. The specimen collection can be formulated from the clinical samples ( like blood, urine, infection sites etc.), environmental samples ( like air, water and soil) and food samples. Preservation of specimen is always carried out in sterile conditions, and the transportation should be done as soon as possible to preserve the viability and minimize the multiplication of bacteria.

Oppositely, the non-culture method involves techniques like PCR, LCR etc. for the bacteria isolation and identification. The microscopic examination is performed after culturing and staining the bacterial specimens, depending upon the microscopic properties like colour, shape, size and other staining properties. You will get to know the definition and the different isolation methods of the bacteria.

Bacterial isolation is defined as the technique of separating one species of bacteria from the bacteria’s mixed culture by different plating methods like pouring, spreading, streaking, and serial dilution. The growth of bacteria can be observed over the solid nutrient medium, in the liquid broth medium and some automated liquid culture medium. To visualize and isolate the bacteria in solid media, we need to add the bacterial suspension into or on the media.

Oppositely, the bacterial inoculum in the liquid broth is characterized by the turgid media. The automated liquid culture medium also detects bacteria’s presence through various characteristics like production of carbon dioxide. Therefore, bacterial isolation provides an important tool to study the morphological, physiochemical and pathogenic properties of the bacteria that has been isolated. 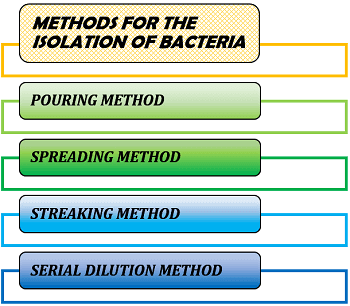 Pouring is the simplest method for bacterial isolation. Here, the bacterial suspension laden with a huge bacterial population is generally taken. 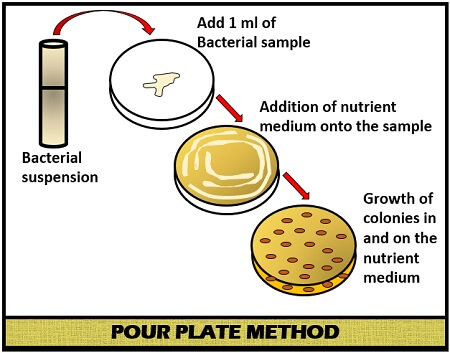 By using a pipette, take 1 ml of a bacterial sample into the sterile Petri plate. For the growth of bacteria, there should be some nutrient source like carbon and nitrogen. Therefore, the most common nutrient agar medium is first prepared and added to the Petri plates containing the bacterial sample.

In the pouring method, bacteria’s isolation becomes difficult because of the suspended bacterial growth in the solid media. Some bacteria appear on the surface of the solid nutrient medium, and some appear under the surface of a solid nutrient medium. Pouring method generally results in the overgrowth of bacterial colonies due to which the isolation of pure culture is challenging. This technique is least recommended for obtaining a pure culture. 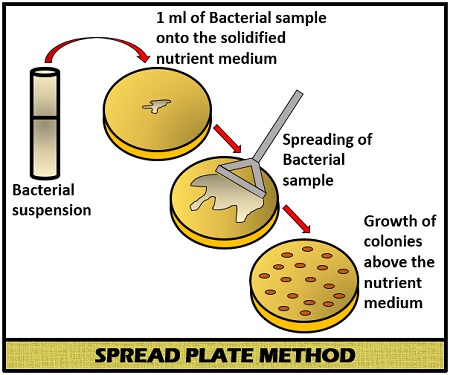 For the uniform distribution of bacteria over the surface of solid media, take the spreader of T or L-shape to spread the bacterial suspension evenly. After that, incubate the culture plates at 35-37 degrees Celsius for 24 to 48 hours. We can see several bacterial colonies after the incubation. In the spreading method, we can select the isolated colonies for the culturing of bacteria. For the isolation of pure culture, the spreading method is not very popular.

Streaking method is very popular and the most widely used method for the isolation of pure culture. To perform streaking, pour freshly prepared nutrient agar medium into the sterile Petri plates and allow it to solidify. 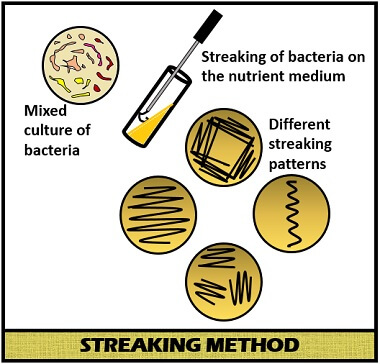 After that, take an inoculating loop and sterilize it on the flame until it gets red hot. Then, take the inoculum by using sterilized inoculating loop and streak over the solid nutrient media by keeping the plate close to the flame to avoid contamination. After streaking, incubate the culture plates for 24-48 hours at a temperature of 35-37 degrees Celsius within the incubator.

This technique is much known for the isolation and culturing of bacteria. In the serial dilution method, take the bacterial suspension and dilute it serially in the successive test tubes. 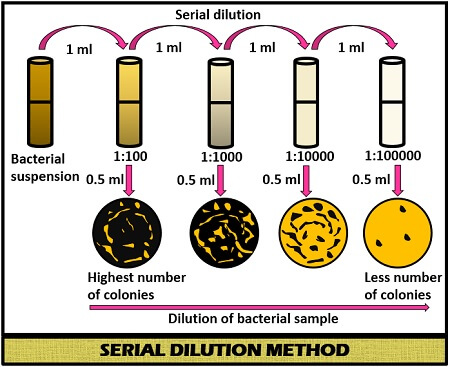 By following the serial dilution, add 1 ml of the sample to the neighbouring test tube sequentially in a series 10-1, 10-2, 10-3 and so on. After the sequential dilution of bacterial suspension, we can inoculate the bacterial culture by using one of the three methods (pouring, spreading and streaking). It is very easy to isolate bacteria from a little bacterial population.

Therefore, the sample containing a low bacterial population will produce less number of colonies and vice versa. We must select the isolated colonies for the staining and microscopic examination to study the isolated bacteria’s characteristics.

Therefore, we can conclude that the bacterial isolation is an important method to study and classify the bacteria based on the macroscopic properties (like growth pattern), staining properties, microscopic properties (like colour, shape and size) and biochemical tests. By knowing these characteristics of bacteria, the diagnosis of clinical specimens and the identification of bacteria that are naturally found in the environment becomes easy.

2 thoughts on “Isolation of Bacteria”