T cell or thymus cell lymphocyte is one of the immune cells, which grows in the thymus gland. It performs a significant role in stimulating an adaptive immune response. T lymphocytes are different from the other immune cells in having T-cell receptors or TCRs on their cell surface.

TCRs exist as a heterodimer protein complex responsible for recognizing antigenic fragments. T cells originate from the stem cells of bone marrow as the precursor cells. Eventually, they move into the thymus gland for differentiation or maturation into several distinct types of T.

The differentiated T cells leave the thymus and go into the lymphatic system or peripheral tissues searching for an antigen on the surface of antigen-presenting cells. T cells activate once they encounter specific antigens. Cytotoxic, helper and regulatory T cells are the three common types.

This post describes the definition, three common types and the whole maturation process of T lymphocytes. Also, the meaning and structure of TCRs have been explained. 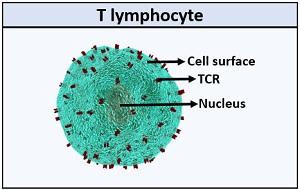 It depends upon the cell receptors, functions and the type of antigens encountered. They are broadly categorized into regulatory and effector T lymphocytes based on the presence of co-receptors like CD8+ or CD4+. T lymphocytes differentiate into cytotoxic T cells that possess CD8 surface marker. T cells differentiate into helper T cells that possess a CD4 surface marker. 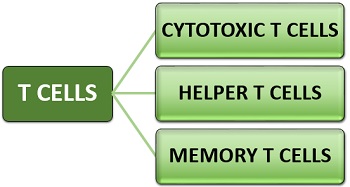 They refer to the cytolytic or CD8+ T cells that consist of CD8+ surface markers. Cytolytic cells function as killer T cells, which destroy the infected cell. The majority of them express TCRs to recognize the target cell. Antigenic fragments of the APC bind to the MHC Class I molecule.

Memory T cells contain CD4+ or CD8+ as the surface markers. They provide long-lived memory and anamnestic secondary immune response. Memory T cells differentiate into effector T cells after exposure to the particular antigen. They remember the formerly attacked target cell and respond to the past infection.

TCR or T cell receptor is a heterodimer that consists of glycoprotein chains arranged on the cell surface. The glycoprotein chain exists as two pairs, either αβ or ƴδ TCR chains, attached via a disulphide bond. The TCR chains are held near the hinge region of the T cell membrane. 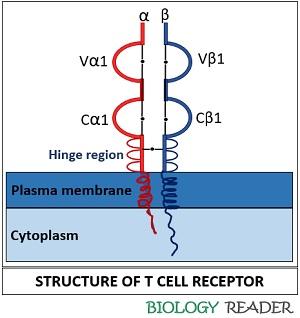 The haematopoietic stem cell of bone marrow releases multipotent T cell precursors and differentiating them into progenitor T cells. Then, the immature PRO T cells travel to the thymus via the circulatory system for their maturation at the time of the embryonic or postnatal stage. 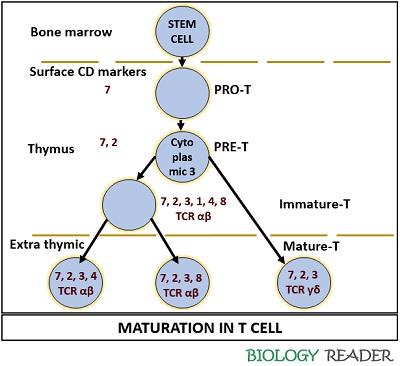 Then, the T lymphocytes leave the thymus via blood circulation to the peripheral lymphoid organs. Once they encounter a specific antigen, the T lymphocytes get activated and differentiate into an effector or regulatory T cells. The efficiency of the thymus to produce mature T cells involutes as age increases, and a person becomes more susceptible to infections.

Therefore, we can conclude that the T lymphocytes are the small immune cells that perform distinct functions in our immune system. When a cell encounters an antigen, the helper T cell stimulates the secretion of cytokines. The release of cytokines stimulates the antibody production by the plasma cells.