Tobacco mosaic virus or TMV belongs to the Tobamovirus group, which causes mosaic-like symptoms on tobacco leaves. TMV is a plant virus that disseminates via artificial inoculation rather than insect vectors.

It was the first virus identified and the first virus ever purified. Since the late 19th century, it was believed that a non-bacterial infectious disease showed detrimental effects on tobacco crops. In the year 1930, the infectious agent was proved to be a virus.

TMV mainly infects tobacco leaves, but it can also infect well over 350 different species belonging to the family Solanaceae. The virus particles consist of a single piece of nucleic acid (RNA) and a surrounding capsid protein. 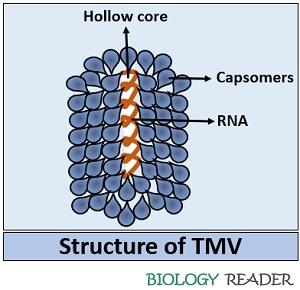 The number of protein subunits in three turns of RNA is 49, or we can say a single protein subunit is linked with three nucleotides of the RNA genome.

RNA: TMV possesses an ssRNA genome with a hollow central cavity of diameter (4 nm). The RNA molecule is spirally twisted to form a helix, where one turn of the helix contains 49 nucleotides. Generally, the virus RNA possesses 6500 nucleotides. It is protected from the cellular enzymatic action by the surrounded capsid.

The genome of the tobacco mosaic virus is monopartite and linear. It contains (+) sense mRNA with a genome size of 6.3-6.5Kb. The virus genome produces five proteins during virus infection. Viral RNA possesses a cap (m7G5’pppG) at 5′-end and histidine group at 3′-end.

Three subgenomic RNAs have been identified during the time of host infection, namely I1 sgRNA, I2 sgRNA and LMC-RNA. Sulzinski has characterized another subgenomic TMV RNA (11-RNA) that is associated with polyribosomes.

Symptoms induced by TMV are somewhat dependent on the age, the genetic background of the infected plant, and environmental conditions etc. TMV induces mosaic disease, which is characterized by the following signs and symptoms:

TMV disseminates from plant to plant by the following means:

The life cycle of TMV goes through the given infectious pathway:

Movement in the infected plant

To cause infection, TMV first needs to enter the plant’s vascular system. It uses its movement protein to spread from cell to cell through plasmodesmata, where the movement is quite slow due to the smaller diameter of plasmodesmata.

After cell to cell transport, systemic transport takes place via phloem sieve elements. The TMV particles reproduce and colonize through the phloem to the roots and tips of the growing plant.

Virus particles disassemble to expose their RNA once the TMV enters the plant cell. The viral RNA is “+ sense”, and it serves directly as a messenger RNA. The translation of the viral genome occurs by the machinery of host cell ribosomes.

The replicase-associated proteins translate within a few minutes after infection. The replicase enzymes bind to the 3′ end of the + sense RNA to make a – sense TMV RNA.

The coat proteins form within the host cell, and it helps in the assembly of virions by interacting with the genomic + sense TMV RNA. The virus particles remain stable for a long period of time, and they may infect other cells in case of wound incision or the leaf dries up. Alternatively, the movement protein wraps the + sense TMV RNA, which eventually infects the neighbouring cells.

There are few control measures through which we could manage the dissemination of TMV.

Therefore, the tobacco mosaic virus is the most resistant and stable virus that remain infectious even after 50 years of storage. From the name itself, it is clear that the virus can induce mosaic-like symptoms on the tobacco leaves and in the Solanaceous family members. It is a serious plant pathogen that reduces not only the yield but also the crop’s quality.