The difference between monocot and dicot stem is mainly in the arrangement and type of the vascular system. Vascular structures in the stem facilitate the upward and downward flow of water and nutrients from the root to the leaves and vice versa.

Monocotyledons are flowering plants having a stem with a simple vascular system. The epidermis of monocot stems has a compact arrangement of tubular cells, with cuticularised outer walls.

They have no cortex due to the absence of extrastelar and interstelar regions. The monocot stem is wholly composed of the ground tissue with hypodermis and a parenchymatous zone.

Numerous vascular bundles lie within the parenchymatous ground tissue with no particular arrangement. 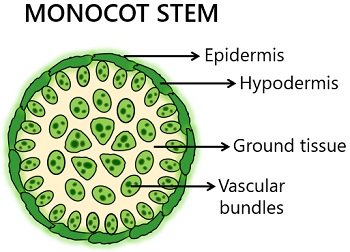 A few multicellular hairs or trichomes can be seen over the outermost layer. The extrastelar ground tissue, i.e. cortex, is present beneath the epidermis, and it is differentiated into distinct hypodermis, parenchymatous zone and endodermis regions.

The central cylinder, i.e. stele, contains vascular bundles in the form of a ring. Pericycle, pith and medullary rays contribute to the formation of intrastelar ground tissues. 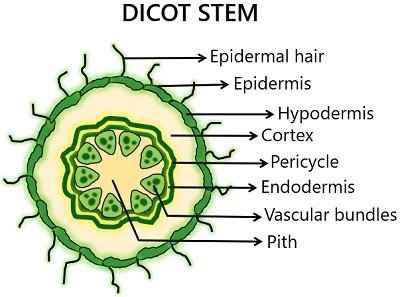 Let us look into the transverse section of the monocot and dicot stem to understand the anatomical differences. 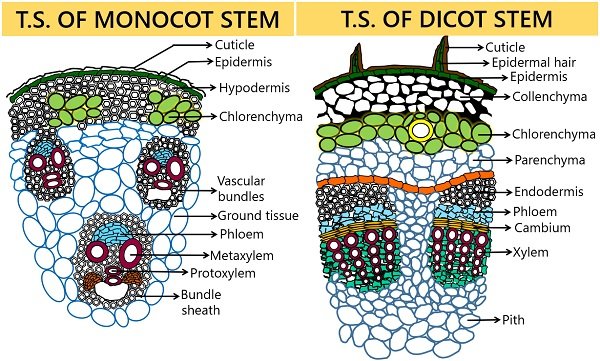 In both monocot and dicot stems, the epidermis is the outermost single-layered tissue that contains parenchyma cells without intercellular spaces.

The stems of monocotyledons and dicotyledons have cuticularised outer walls. Besides that, there is a characteristic difference in the epidermis layer of the monocot and dicot stem.

Epidermis, along with the cuticle, safeguards the internal cells against any injury (due to physical, chemical and mechanical sources), desiccation and infection.

It is the intermediating layer between the epidermis and stele. The stem of monocotyledonous plants contains a non-differentiated cortex, or they wholly comprise ground tissues with hypodermis and parenchymatous zone.

Conversely, the stem of dicotyledonous plants has a well-differentiated cortex subdivided into endodermis, pericycle, and pith.

They contain conducting tissues such as the xylem and phloem, which transport water and food to various plant’s parts. Its presence is one of the important properties through which we can easily differentiate between the monocot and dicot stem.

It is a region found within the central cylinder or stele. Intrastelar ground tissues only exist in the dicot stem with three distinct layers (pericycle, pith and medullary rays).

Therefore, we can conclude that the monocot and dicot stem differ in the ground tissues differentiation, epidermal outgrowths and size, shape and arrangement of vascular bundles.