Depending upon the photoperiodic effect on flowering, the plants are grouped into three classes, namely long day, short day and day-neutral plants.

Garner and Allard were the two scientists who introduced the phenomena of photoperiodism in the year 1920. Plants experience some physiological changes as a developmental response (like flowering) relative to the photoperiod length.

Photoperiodism refers to one of the plant’s mechanisms where it can sense the alternations in the day and night length through the photoreceptor proteins and decide when to induce flowering. That’s why different plant species develop flowers in different seasons, which is only due to the difference in the photoperiod length.

Types of Plants Based on Photoperiodic Effect

There are three major classes of plants, depending upon the photoperiodic effect: 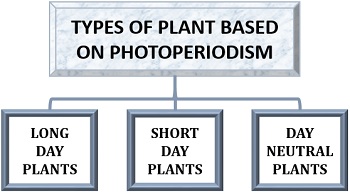 If you wonder that sunlight is the only factor inducing flower growth, then the answer is no. Sunlight alone cannot cause flowering in a plant, and a plant must contain certain chemicals that can respond to the action of the light stimulus.

In the year 1935, a scientist named Cajlachjan introduced one hypothetical hormone called “Florigen”, whose existence and origination is still unclear.

Florigen is a phytohormone supposed to induce flowering in plants in response to the changes in photoperiod length. Depending upon the length of photoperiod, plants incite flowering in different ways, and they are categorized typically into three types: 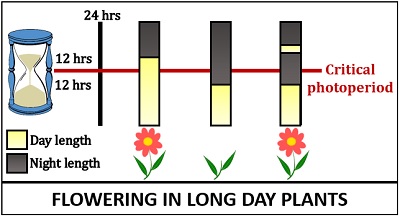 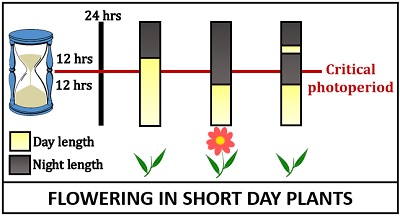 These plants are independent of the photoperiod effect. Day-neutral plants will develop flowers in all three conditions, whether the day or night length exceeds the critical photoperiod or not. 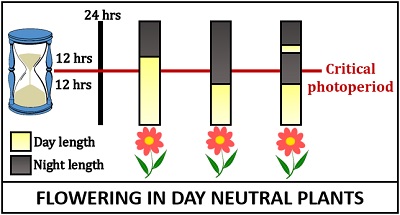 It is a process of inciting a floral stimulus in the leaf. Leaves are the region perceiving a light stimulus, which then releases photopigments like phytochromes. A phytochrome changes its conformation depending upon the type of plants. In LDP, PR transforms into PFR during the daytime.

In contrast, there is a reversion of PFR into PR during the nighttime in SDPs, and the phenomena refer to the dark reversion. A change in phytochrome configuration will induce the synthesis of flowering stimulus or florigen.

Leaf translocate the flowering stimulus into the shoot apex under particular photoperiod. When a flower stimulus reaches an active region of the shoot apex, it incites the growth of flower primordia. 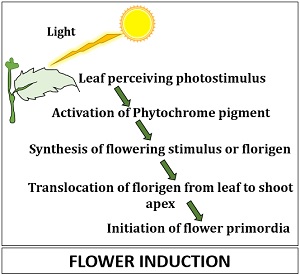 Thus, the induction of flowering is dependent on the photopigments and phytohormones present in the plant, which responds to the light stimulus in different ways or produces flowers in different seasons.

It refers to a photopigment that is photosensitive in nature. Depending upon the day and night light, the phytochrome exists in two disparate conformations like PR and PFR. Phytochrome exists as a dimer, consisting of two analogous polypeptide chains, each having a molecular weight of 125 kDa.

The two polypeptide chains attach via a covalent bond. They are generally the protein pigments that appear as linear tetrapyrroles. The phytochrome structure comprises the prosthetic chromophore group and protein part (apoprotein), which in combination with chromophore forms the holoprotein.

The presence of phytochromes has been detected in plants like angiosperms, gymnosperms, bryophytes etc.

A phytochrome absorbs light at a different wavelength and changes its structural configuration either into PR and PFR forms relative to the light absorbed. Both PR and PFR forms are interconvertible, and their concentration in different plants may vary. 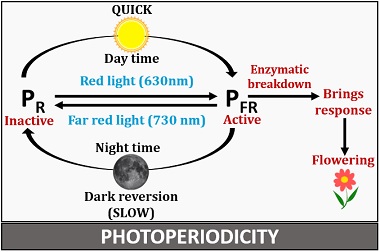 When the phytochrome exists as an active PFR form, the plants produce a response that further induces flowering. In a PR state, a plant will not incite flowering.

Phytochromes refer to the photoreceptors, which respond to the environmental light conditions and controls a variety of photomorphogenic responses. Its concentration is highest near the shoot apex, where it induces flowering.

Photoperiodism has a significant role in the study of cross-breeding experiments and governs the season when a plant shall bloom its flower. It is an example of physiological preconditioning, which means a plant receives a photoresponse once and then undergoes physiological changes like seed germination, flowering etc., in a particular season.