The cell wall and the internal structure of the actinomycetes are similar to the group of bacteria. Thus, actinomycetes refer to the filamentous actinobacteria that serve as a connecting link between the bacteria and fungi and shows resemblance with both.

They are the true bacteria (not fungus) and placed in the kingdom “Bacteria” and a class “Actinobacteria”. These are ubiquitous in nature (commonly found in soil). In addition to soil, they are also very common in marine habitat and considered as a treasure house of secondary metabolites.

Actinomycetes behave like decomposers, which carry out the degradation of organic compounds like chitin, complex sugars, hemicellulose etc. Its filamentous forms are predominantly aerobic, while a few are anaerobic. Here, you will get to know the definition, characteristics, life cycle, classification and economic importance of the actinomycetes.

Actinomycetes refer to prokaryotic or unicellular organisms that are having a gram-positive cell wall. The morphology of actinomycetes is more or less similar to the fungi because they can also produce a filamentous, dense, branched and raised colony over the substrate like fungi.

Most of its features are common to bacteria than that of fungi, due to which actinomycetes have been placed in the group of bacteria. They include members like mycobacterium, corynebacterium, streptomyces, and actinomyces. The diameter of an actinomycete cell is much smaller (1-2 µm) than the branched fungi (ranges between 5 µm-10 µm).

The filamentous forms of actinomycetes are aerobic and they may produce spore singly or in chains. Its colony appears as a pigmented powdery mass due to the formation of aerial spores.
Classification:
Domain: Bacteria
Phylum: Actinobacteria
Class: Actinobacteria
Order: Actinomycetales
Family: Actinomycetaceae 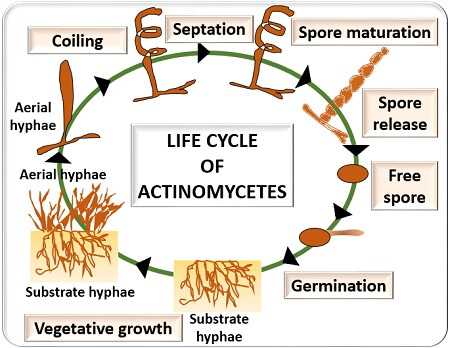 Actinomycetes have seven families, based on the hyphal and reproductive structures.

Actinomycetes are the economically important organisms that play a fundamental role in many areas like: 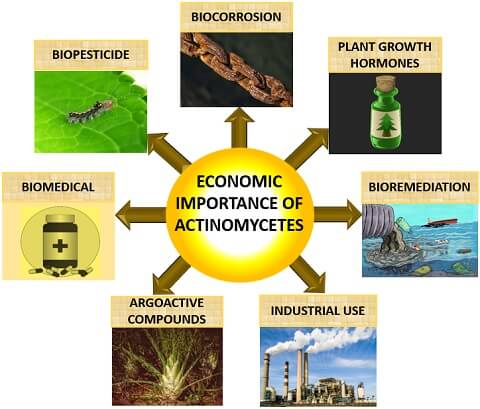 Actinomycetes digest complex carbohydrates like chitin, cellulose, hemicellulose etc. It also helps in the degradation of toxic compounds from the environment. Thus, it plays an essential role in the bioremediation of organic compounds. Actinomycetes can survive in a harsh environment like high temperature up to 50 degrees Celsius that is crucial for the composting process.

Members of actinomycetes can produce many of the best-known antibiotics like amphotericin, neomycin, novobiocin, chloramphenicol, tetracycline etc.

Use in Regulating Plant growth

Actinomycetes produce several enzymes, which show a wide range of applications in different fields like:

Actinomycetes produce agroactive compounds as they are extensively present in the rhizospheric zone of the plant. Thus, they can actively colonize themselves with the plant roots and protect the plant from pathogenic fungi and other phytopathogens. Frankia is an example of actinomycetes, which acts as a “Symbiont” that promote root nodule formation and thereby in nitrogen fixation.

Actinomycetes are also used as a biopesticide that attacks insects like Musca domestica, Culex quinquefasciatus etc. It kills 90% of insects at their larval and pupal stage.