Biofertilizer production is necessary for the agricultural lands that have been deprived of soil minerals and nutrients important for the plant growth and development. Biofertilizers is different from chemical fertilizers that impose a negative impact on the soil quality as well as the people consuming the crops grown from it.

Biofertilizer can define as the formulations of living microbes that fix the atmospheric nitrogen either by living freely in the soil or by associating symbiotically with the plant. Its commercial production is cost-effective, and are quite inexpensive to buy. It enriches the soil with dormant (metabolically inactive) or living microorganisms that neither degrade the soil quality, nor it harms the growing plants. Biofertilizers are easily biodegradable products that do not cause soil pollution. The microorganisms that are most commonly used in the bio-inoculant preparation are:

Biofertilizers significantly enhance the certain microbial process to increase the bioavailability of nutrients in a form which can be assimilated by the plant. Biofertilizers are of low-cost and has an important role in supporting soil health and in minimizing environmental pollution.

A plant requires a balanced amount of nutrients and minerals to grow. It will be shocking to know that only the small portion of soil produces nutrients every year via certain biological or chemical methods. Therefore, the production of biofertilizer aims to supplement the soil with the essential nutrients that already exists in it. It also aims to control soil-borne diseases. The production and use of biofertilizer have an approach to improve soil health, soil properties and result in higher yield rates.

Biofertilizers are the biological preparations that having the live dormant strains of microbes, which impose a good impact in soil rhizosphere that, in turn, helps in plant development. Biofertilizers are formulated with living or dormant (inactive metabolically) microbial cells. To produce bio-fertilizer of good quality, firstly an efficient nitrogen-fixing strain is selected, then its inoculum is produced.

Inoculum is a form in which the strain is inoculated in the seed or soil. Besides strain selection, maintenance, storage and packing are other aspects of bio-fertilizer production. During the biofertilizer production, the product which is being manufactured must fulfil the quality standards laid down by BIS. 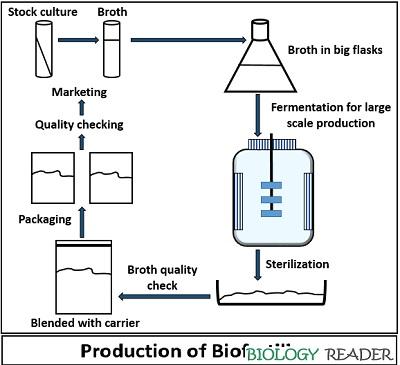 Commercial Production: The isolated strain is inoculated in small flasks containing a suitable medium for inoculum production. The starter culture should have a volume that must produce at least 1×109 cells/ml. Then the culture is added in to the carrier for the preparation of bio-inoculant. Carriers carry the nitrogen-fixing organisms that are inoculated into the seed or soil.

Generally, the carrier is first sterilized and then inoculated. But in a few cases, the carrier can be inoculated first and then subjected to sterilization via UV irradiation. Then, the packaging of inoculum or biofertilizer is carried out with a quantity of 109-1010 viable cells/ gram. As per the quality standards, the final moisture content of biofertilizer must be 40-60%. For large scale biofertilizer production, large culture fermenters are being used rather than big flasks. The production process of biofertilizer includes the following sequential steps:

The efficient nitrogen-fixing strains are first selected, maintained and multiplied artificially in the laboratory on the nutrient-rich medium before inoculating it in the seed or soil.

Firstly, prepare the inoculum of the desired strain. After that, inoculate the seeds by using either of the seed coating method (direct coating or slurry method). Direct seed coating method makes the use of gum arable or sugary syrup. Slurry seed coating method makes the use of efficient nitrogen-fixing strains (coating of rhizobia over specific host legume seeds). Then add calcium carbonate to the sticky seeds right away after seed coating. Sometimes, root nodule bacteria is absent in soil that is necessary to fulfil the plant’s nitrogen requirements. Therefore, soil that consists of an inadequate number of nodule bacteria should be inoculated with seed pellets of highly effective rhizobia.

Inoculants are nothing, but simply the mixture of the starter culture and a finely milled carrier material. Ideal properties of the carrier should have the properties:

Therefore, by having these properties, a carrier material can prolong the growth of microbial strains nitrogen, which it is carrying. Peat is the most common carrier used in the bioinoculant prepration. The use of peat is not common in certain countries such as India, due to its unavailability. Therefore, peat as a carrier can be substituted by the variety of alternative carriers like lignite, coal, charcoal, vermiculite, polyacrylamide etc.

The production of inoculant involve the most crucial stage of carrier processing, where the carrier material is subjected to the following stages:

During the production of biofertilizers, it should be kept in mind that the product must make up the quality standards. The inoculant should be carrier-based. There should be a minimum of 108 viable cells per gram (dry mass) of the carrier in the inoculant. The inoculant must have an expiry period of at least 12 months from DOM.

Inoculation into the Field