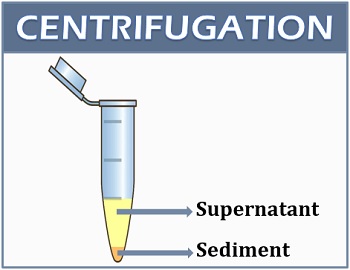 Centrifugation method is a process of separating different components or the suspended particles from the homogenous solution, by the practice of centrifugal force. It separates particles based on their physical properties like size, shape, density etc. and chemical properties like molecular weight and viscosity.

Centrifugation method can define as a process of concentrating suspended particles from the aqueous medium, where the particles segregate by the formation of discrete bands and pellet depending on their size and density. A centrifuge is an apparatus that aptly cause partition of two definite phases, namely supernatant aqueous phase and suspended solid phase. A rotor inside the centrifuge generates a central force that facilitates the separation of solid and aqueous phase according to the sedimentation rate, which commonly refers to as “Centrifugal force”.

Based on the type of separation molecules, there are two significant types of centrifugation:

A centrifugation method depends on the gravitational movement of suspended particles, which cause deposition of high-density particles towards the bottom. It is important to note that higher is the difference between the densities of particles, easy will be the separation. If the density difference is low, then the separation becomes tough, and in such case, gravitational force must be accelerated.

Therefore, a centrifuge accelerates the rate of sedimentation by increasing the relative centrifugal force (RCF) measures by the rotations per minute (rpm). If RCF is equal to 100X g, then it is equivalent to the centrifugal force that is a hundred times greater than the force of gravity.

A centrifugal force is a kind of force that causes circular motion of the particles and can express as:

Where, m= Mass of particle
ω= Angular velocity in radians per second
r= Radius of a particle from the axis of rotation
ω2r= Centrifugal acceleration 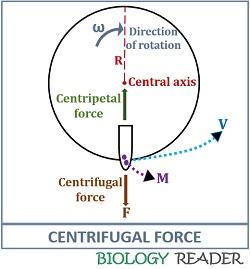 In terms of gravitation force, the equation will represent as,

Other than, centrifugal force, there are some other interacting forces, namely buoyant and frictional force. 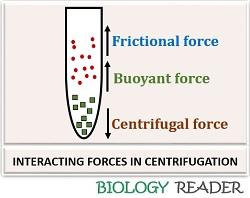 A frictional force is a kind of force that restricts the movement of dispersed particles in the solution. The frictional coefficient is smaller for a minute particle than the dense particle.

The mass of 1mole of particles represented by,
M=mN (Where N is the Avogadro’s number)
fv= Mω2r (1– v̅ρ)/N

There are commonly three kinds of centrifugation technique that are given below: 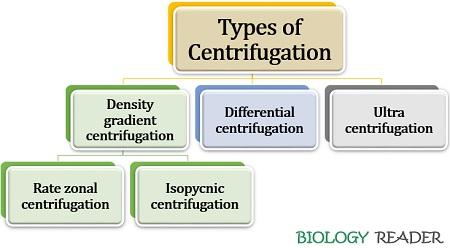 On centrifugation, the different molecules of different density will occupy the place in a density gradient respective to their mass. Finally, a concentrated layer of the particles is isolated by puncturing the centrifuge tube. It is of two types, namely:

It also refers as “Velocity centrifugation” where the particles in a solution separate based on their sedimentation rate that directly depends upon the particle mass or size. The particles’ shape also influences the rate of sedimentation.

It makes the use of high-density sucrose solution of 5-20% to create a density gradient. The sedimentation of dense particles takes place at the bottom of the centrifugal tube, and the light particles remain at the top. Therefore, zonal centrifugation develops discrete bands or zones respective to the density of the particles present in the sample. 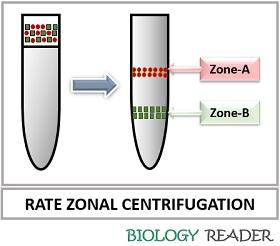 It also refers as “Equilibrium density gradient centrifugation” where the particles are concentrated based on their buoyant density that is independent of particle size and shape. The time taken for centrifugation of particles does not affect the rate of sedimentation. 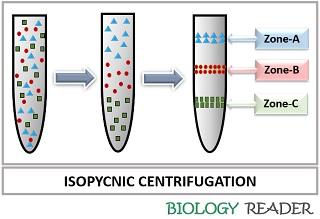 This method is employed for concentrating such particles those possessing the same size but different density. The sedimentation of biomolecules will not occur until the buoyant density does not equal to the density of the gradient. In Isopycnic centrifugation, 20-70% of sucrose solution develops a gradient to separate different molecules.

It is a kind of centrifugation method depends upon the differences in the sedimentation rate that directly influences the separation of different components according to their relative mass, shape and density. Generally, it separates the subcellular components. In differential centrifugation, the cells are blended, and the ruptured cell components are poured into a centrifuge tube that preserves the integrity of the cell components. 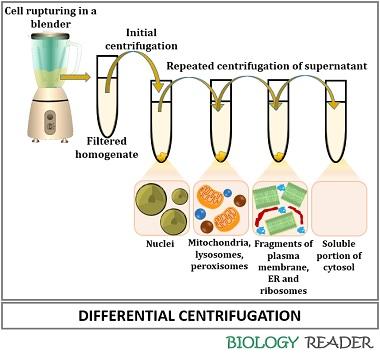 This method increases the earth’s gravitational force by the use of centrifugal force (1,000,000 times) greater to the gravitational force. Ultracentrifugation can sediment particles as small as 10kDa. In a homogenous mixture, the dense particles will appear as a pellet at the solvent sink, and the lighter particles will appear as supernatant at the solvent top. Ultracentrifugation uses a dense solution of sucrose or caesium chloride to concentrate particles.

Following are the applications of centrifugation technique in different areas of research like:

Therefore, we can conclude that the centrifugation technique has broad applicability in the field of research biochemistry, molecular biology, cellular biology and medical science.