Spoilage of fish is a process of deterioration in the quality of fish, which changes its appearance, odour and taste. The breakdown of biomolecules like proteins, amino acids and fats in the fish are the factors responsible for fish spoilage. Thus, a fish can be spoiled by either chemical or biological degradation.

In chemical degradation, protein, fats, amino acids etc., are decomposed, whereas microorganisms carry out the biological degradation. Other than bacterial and chemical degradation, enzymatic and mechanical damage can also cause fish spoilage. There are certain factors like high moisture, protein and fat content, improper handling etc., that favouring the spoilage in fish.

The common causes of fish spoilage are bacterial contamination and chemical oxidation (protein, fats etc.). The microorganisms involved in fish spoilage refer to the SSOs (specific spoilage organisms) that result in the formation of numerous unwanted metabolites, which adds undesirable appearance, flavour, and odour to the fish.

SSOs’ growth strongly depends upon the nutritional components of fish, moisture content, high temperature etc. You will get to know the definition, causes, types, and assessment of fish spoilage in this context.

It refers to the contamination of fish, resulting in an undesirable change in the colour, texture, flavour, odour, appearance, etc. Spoilage of fish is also called “Putrefaction”. Fish spoilage can occur due to enzymatic degradation, bacterial degradation, chemical decomposition and mechanical damage. We can characterize the spoiled fish by observing the colour change, fishy smell, sliminess in the skin and scales, firmness of the flesh, discolouration of the backbone etc.

The action of microbes, enzymatic activity and oxidation of nutritive elements present in the fish are the common causes of fish spoilage. In addition to these, some other factors are also responsible like: 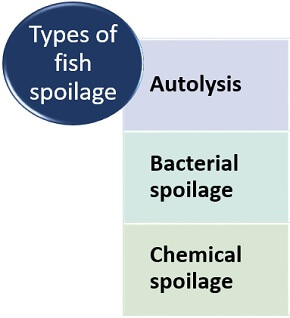 It refers to enzymatic degradation that results in the cell damage of fish and release of an autolytic enzyme, which degrades the cell components like proteins, fats etc. and thereby changes the flavour of fish. The changes in the flavour of fish can be due to the conversion of ATP to hypoxanthine and the decomposition of fish.

Autolysis can change the appearance and odour of the fish by two ways:

A fish acquires a load of bacteria in the gills and on the surface. When a fish dies, the bacteria already present in the fish attack the flesh and result in the formation of undesirable products. The microbial growth in fish depends on the type of water from where it caught. The bacteria cause fish spoilage by the following means: 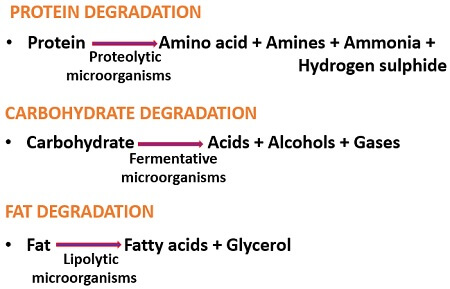 We can access the quality of fish by the three consecutive methods: 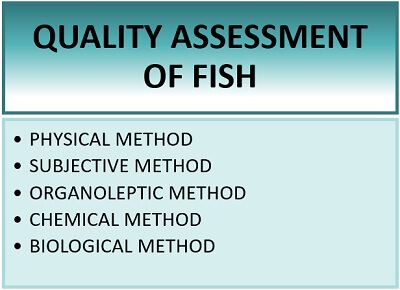 Torrymeter is a device placed vertically, and it provides a digital reading of the fish quality, whether it is aged or fresh. From the digital readings or values of the torrymeter, we can estimate the fish freshness.

A low value indicates the presence of more bacterial mass. 10 is the highest value for the freshly caught fish, and below 3 is the value of spoiled fish. The value of 6 on the torrymeter is acceptable by the consumer.

It is a sensory method assessed by the sensory organs, which represent the customer view.

It includes the quality assessment of fish by the sense of sight, smell, touch etc.

We can check the quality of fish by using our sense of sight to examine the fish’s eyes, gills, and skin surface.

We can also check the quality of the fish by using our sense of touch to examine the flesh and scales of the fish:

We can also check the quality of the fish by using our sense of smell:

It includes the following methods:

It includes the total plate count method (TPC). The biological method involves a quality assessment of fish by the bacterial cell count. First, you need to grind the fish and then dilute the sample by following serial dilution. Prepare media for the growth of microorganisms present in the fish, where we can use both ordinary and selective media.

We can use agar media to enumerate the microbial mass in marine fish and tryptone glucose beef extract agar media to calculate the cell count in processed fish. Other than this, selective media like SS-agar can be used for the detection of coliform bacteria (E.coli, Shigella sp, etc.) in the fish. After media preparation, perform the pouring method and incubate the plates for 24 hours at 35-37 degrees Celsius.

6 thoughts on “Spoilage of Fish”