The production of streptomycin requires the stock culture of Streptomyces griseus, proper nutrient medium and the other growth-promoting substances. Streptomycin is an antibiotic that shows a broad spectrum against the gram-negative bacteria and is the first antibiotic to cure TB. In 19th October 1943, a scientist Albert Schatz from the Rutgers University was the first to isolate “Streptomycin”.

Albert Schatz was the PhD student, working under the guidance of Selman Abraham Waksman. Along with streptomycin, Waksman and his interns have also discovered several other antibiotics like actinomycin, neomycin, clavacin etc. Streptomycin was the first medicine discovered for the treatment of tuberculosis, which was found to be effective.

According to the World Health Organisation (WHO), streptomycin is the safest medicine for treating tuberculosis. Streptomycin has been included in the list of essential medicine needed for the health system by the WHO. In the year 1952, Waksman won Nobel Prize in physiology and medicine for the discovery of streptomycin.

Streptomycin: Streptomycin refers to the broad spectrum aminoglycoside antibiotic, which works actively against the gram-negative bacteria. Streptomycin is commercially available as “Hypochloride” with a chemical formula C21H39N7O12.3HCL.

There are three sugars with carbon, nitrogen, oxygen and hydrogen elements in the structure of streptomycin. Some of the physical and chemical properties of the streptomycin are given below in the table.

Streptococcus griseus is an actinomycete, which is used for the preparation of streptomycin. Krinsky was the first scientist isolated S.griseus during the time of 1st world war from the Russian soil.

S.griseus is commonly present in the soil, and it is gram-negative bacteria. It produces grey mycelium during sporulation and produces grey yellow reverse pigment when it grows in the form colony. 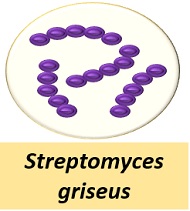 Streptococcus griseus secretes toxin valinomycin, which can cause apoptosis in natural killer cells and mitochondrial swelling in peripheral lymphocytes. Thus, due to the presence of valinomycin, the excessive use of streptomycin can cause neurotoxicity like hearing loss, dizziness etc.

Production of streptomycin is a complex process, which goes through a series of operations under the sterile conditions. Let us summarize the steps in the production process of streptomycin. 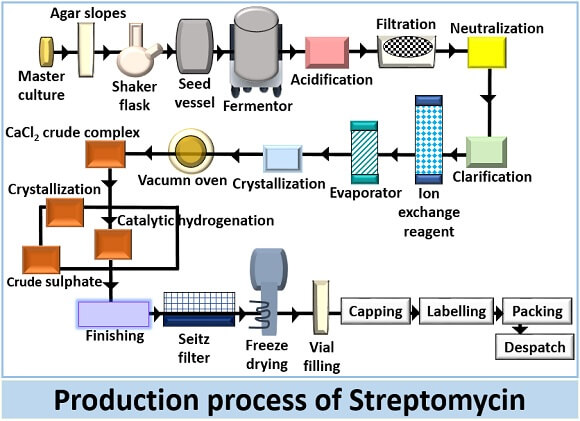 Maintain the hymns of Streptomyces griseus spores in the stock soil culture. Then, inoculate the inoculum of S.griseus into the agar media at 28 degrees Celsius.

After that, the spores of S.griseus sporulate and build up the mycelial network in the flask or seed tanks. The sporulation of S.griseus occurs well in a liquid culture medium, and it forms endospores in low nutrient availability. The growth of S.griseus requires a pH range of 5-11. 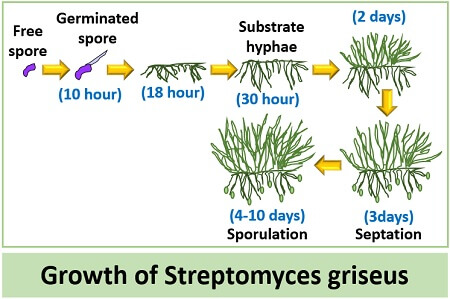 Preparation of the Medium

The production of streptomycin requires Hockenhull nutrient medium with the following media composition:

For the production of the medium, there must be energy sources like carbon, nitrogen etc.

Besides the above sources, compounds like proline, oils, fatty acids, antioxidants are also used to accelerate the streptomycin production. The precursors are not required for the production of streptomycin.

Sterilize all the above contents and fed into the stirred tank fermentor. Then, transfer the bacterial inoculum of about 4-5% to the medium. Maintain a temperature between the range of 25-30 degrees Celsius and pH between 7.6-8 inside the fermentor. The production of streptomycin requires continuous fermentation, and the growth of S.griseus requires continuous aeration and agitation. The fermentation process takes 4-10 days. The fermentation process involves three consecutive phases.

During the first phase, the S.griseus grows by utilizing soya meal and releases ammonia through proteolytic activity. The pH rises during this phase. S.griseus slowly utilizes the carbon source present in the soy meal and the glucose and thereby producing streptomycin at a slower rate.

After the utilization of soy meal and glucose, the ammonia is secreted, and the streptomycin is synthesized rapidly. In this phase, the incubation period lasts for 24 hours to 6-7 days. The pH during this phase remains constant between 7.6 and 8. There is little or no production of mycelium.

It is the final phase of fermentation, where the concentration of glucose depletes from the medium that results in cessation of streptomycin production, and the bacterial cells begin to lyse. As a result, the medium’s pH increases by the deposition of ammonia after the cell lysis. Before cell lysis, harvest the fermentative medium for the process of recovery and purification.

The recovery of streptomycin includes the following stages: 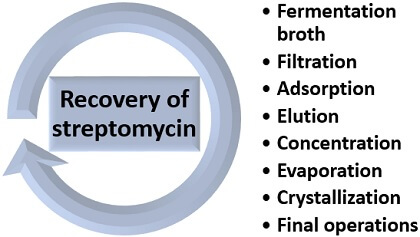 To avoid or reduce the chances of contamination, you can use special microbial filters, triethylene glycol as a disinfecting agent, and UV lamps. All these factors maintain sterile conditions throughout the production process of streptomycin.

Agriculture science: Streptomycin is used as “Pesticide” that inhibits the growth of bacteria, fungi, algae etc.

Cell culturing: It is used at the time of cell culture, to prevent undesired microorganisms’ growth.

Biochemistry: Streptomycin sulphate is also used in the purification of biomolecules like protein and sometimes nucleic acid.

1 thought on “Production of Streptomycin”