Colony hybridization is the method first given by the scientists Grinstein and Hogness in the year 1975. This method isolates the specific DNA sequences or genes from the hybrid DNA. Colony hybridization makes the use of the nitrocellulose filter paper. This technique is very much similar to the replica plating.

The DNA hybridization occurs by using radioactive RNA followed by autoradiography. The hybridized DNA is then picked from the reference or master plate for further study. You will get to know the definition, process and the transferring medium used in the colony hybridization.

Colony hybridization is the blot analysis technique where the bacterial cells are transferred from the solid nutrient medium to the absorbent material. It can define the method for isolating the specific DNA sequences or genes from the bacterial cells containing hybrid DNA using a nitrocellulose membrane filter. The transferring medium (nitrocellulose filter paper) is then subjected to several chemical and physical treatments.

The process of colony hybridization involves the following steps: 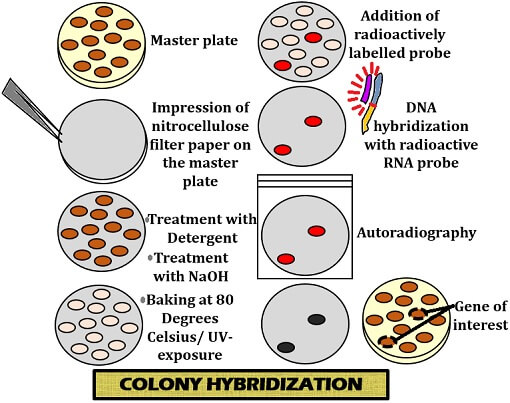 Preparation of Master plate: First, inoculate the bacterial cell suspension on the solid agar medium to prepare the master plate. After inoculation, the number of bacterial colonies will develop with different plasmids on the master or reference plate.

Treatment of filter medium with SDS: After that, treat the nitrocellulose filter paper with the SDS (Sodium dodecyl sulfate) detergent to lyse the bacterial cells.

Identification of the desired gene: Compare the developed autoradiogram with the master plate to identify the colonies containing a gene of interest. The cells containing the desired genes will grow in the liquid medium, and they can be further processed for the isolation of recombinant plasmid DNA.

Therefore, we can conclude that the colony hybridization method is the screening technique that uses the radioactive probe. The radioactively labelled probe screens or isolates the particular gene from the number of bacterial colonies.