ATP synthase is a transmembrane enzyme complex, which catalyses the generation of ATP through the condensation of ADP plus Pi. Its primary role is to produce high energy ATP molecule. ATP synthase brings out the formation of ATP at the time of light-reaction photosynthesis.

Its working depends upon the proton gradient created in the thylakoid lumen, which helps the proton molecules down the thylakoid membrane of plant cell into the chloroplast stroma. The process of ATP synthesis during the cellular respiration simultaneously pairs with an electrochemical gradient formed by the difference in proton (H+) concentration.

ATP synthase can define as the enzyme complex, which possesses multiple subunits  that plays an integral role in the ATP synthesis by using the proton motive force that turns out due to the potential difference of protons inside and outside the membrane. It is also called multiprotein or F0F1 or CV complex. ATP synthase during photosynthesis activates, as the proton ion crosses the thylakoid membrane.

As a proton moves beyond the concentration gradient, a proton motive force turns out that in turn used by the ATP synthase. It results in the condensation of Pi  plus ADP to produce ATP. An ATP synthase catalyses the following reaction:
ADP + Pi + 3H+out ⇌ ATP + H2O + 3H+in 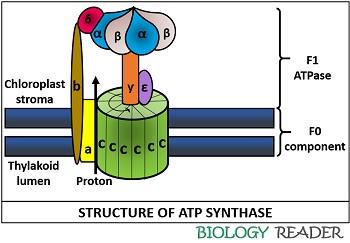 It is the hydrophobic region composed of one a-subunit, two b-subunits and 9-12 c-subunits. The c-subunits possess two α helices that streches out from the thylakoid membrane. F0 component is associated with the thylakoid lumen.

It forms a regulated H+ ion channel to mediate ATP synthesis. Its activity is inhibited by an antibiotic named oligomycin, which completely blocks the ADP phosphorylation into ATP. Here, a subscript ‘O’ denotes the inhibition of transmembrane complex, i.e. FO component by the oligomycin.

It is the hydrophilic region, which is composed of three α-subunits, three β-subunits, and one subunit each of ƴ, δ and ε. All these subunits are bound to the F1 component and are associated with the chloroplast stroma.

The combination of α plus β-subunits constitute a hexamer with six binding sites, in which three subunits participates in the ATP synthesis. The ƴ-subunit is attached centrally to the f0 component. F1 ATPase complex was first extracted from the mitochondrial inner membrane and introduced by the scientist Efraim Racker.

According to his research, the F1 ATPase complex can only cause ATP hydrolysis, not a condensation of ADP into ATP. Because of its hydrolysis property of ATP, this complex named as F1 ATPase. 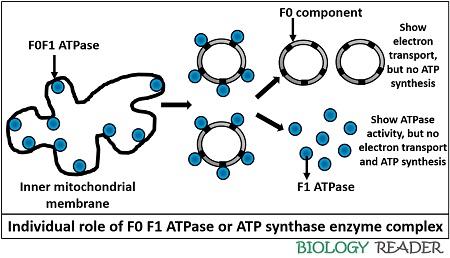 Rotor: The C9-12 complex along with the ƴ and ε constitute the moving unit, i.e. rotor. It undergoes rotational motion, as the protons or H+ ions move across the thylakoid membrane. Due to the rotary mechanism, ATP synthase is also termed as molecular machine.

Stator: The B2 and a subunit along with the α3 β3 δ complex, makes up the stationary unit, i.e. stator.

The whole F0F1 complex plays a biological role in catalysing the condensation of ADP plus Pi into the high energy molecule ATP and hence called as ATP synthase complex.

ATP synthase is a transmembrane enzyme which produces a high ATP molecule by utilizing the proton motive force. To explain the mechanism of ATP synthesis, binding change or flip-flop model is one of the widely accepted models.

Paul Boyer introduced binding change mechanism. According to the flip-flop method, ATP synthesis occurs by the conformation change in the ATP synthase because of the rotational motion of gamma subunit.

As the protons move down the F0 component, the gamma subunit of F1 ATPase brings out the conformational change of the nucleotide-binding sites in the F1 beta subunits. As a result, a proton motive force is experienced by the F0 F1 complex that further catalyse the generation of ATP. The ATP synthesis occurs by the two successive stages. The diagram below depicts the one stage of the active cycle.

The first stage explains the conformational changes in the F1 alpha and beta-subunits. ATP synthesis is best explained with the three state conformational model, in which each state differs in the binding affinity towards ATP, ADP and Pi.

The intermediate state represented within the bracket shows the interconversion between the different state of (αβ)3 hexamer. An L-state can interconvert into T-state, which in turn can transform into O-state that can also convert again into an L-state by the rotation of gamma subunit within the (αβ)3 hexamer complex.

A gamma subunit revolves in anticlockwise direction at an angle of 120 degrees. Thus, the free energy produced while the proton translocation is availed by the cell for the interconversion of O, L and T state.

In the second stage, the ATP synthesised in the T-state releases out in the O-state, and the new ADP and Pi can bind to an L-state.

Therefore, we can conclude that the ATP synthase performs a significant role in the generation of ATP during the light-dependent phase of photosynthesis. A cell needs ATP to carry out various functions, including cellular respiration and cell metabolism.