Citrus canker disease was originated from Southeast Asia, i.e. India. It is a kind of bacterial disease that can cause endemics in most of the areas because it spreads rapidly by many factors that we will discuss in this content. It has a high potential to cause damage or infect all the surrounding citrus growing fields. Therefore, it can cause huge ecological loss by creating damage to the citrus plant species. Citrus canker disease is favoured by factors like heavy rainfall and warm weather.

The disease is characterized by the lesion formation on the leaves and through fruit-rind blemishing. In this context, we will talk over the causative agent and the conditions that favour the occurrence of an infection. Besides, we will study the pathogen life cycle along with its transmission, symptoms and control measures of the Citrus canker disease.

Many environmental conditions favour the disease of citrus canker which is as follows:

The persistence of rainfall cause rotting in several parts of the plants due to the wet soil. Also, the warm, humid temperature favours the insect population growth, after which the insect vectors may further disseminate the infection in the surrounding citrus growing crops. Besides, factors like strong winds also contribute to the disease cycle of the citrus canker. Citrus leafminer damage is caused by the larvae that feed upon the citrus growing plants. As a result, the larvae expose the tissues of the plants to citrus canker infection by forming tunnels in the leaf foliage.

The disease of citrus canker disseminates by the following factors which include:

The symptoms of citrus canker include: 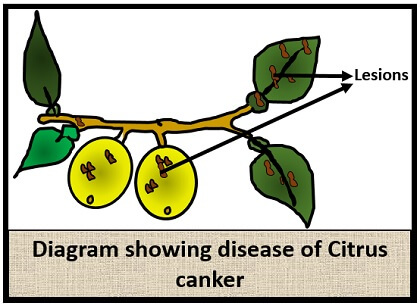 Initial symptoms: These are characterized by the formation of rough lesions (with a yellow halo around it) on the leaves. The initial symptoms will become visible after 7-10 days of infection.

Later symptoms: These are characterized by the appearance of warty cankers on twigs and stems and the formation of scabby lesions on the fruit-rind. Fruits and stem support the long-term survival of the bacteria and on severe infection, the bacteria cause:

Xanthomonas axonopodis first attacks the cuticle of the plant, after which it enters through the stomatal pores of the leaves either through the rainwater or wound, i.e. by any cut in the leaf. Then in the epidermis, Xanthomonas axonopodis undergoes multiplication and starts increasing its number. After multiplication, it occupies in the intercellular spaces of the plant tissues.

Then, the bacteria damage the middle lamella and enter the mesophyll cells by infecting it. Finally, it causes the formation of lesions starting from the leaf foliage and leading to the other parts like twigs, stem and fruits. Lesion formation results due to the malic acid formation by the intense metabolic activity of Xanthomonas axonopodis. 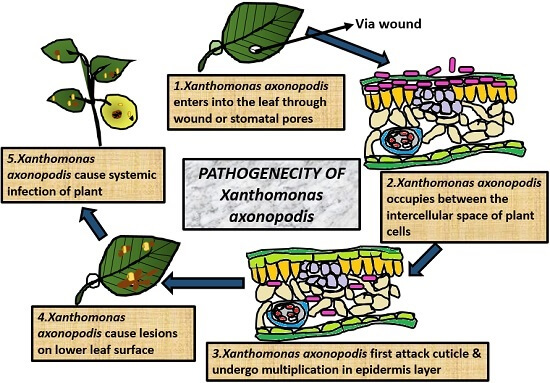 The infection starts from the leaf or stem, which disseminates through rain and wind. Thus, these extrinsic factors like wind and water flow carry the inoculum to the uninfected plants. Then the bacterial inoculum slowly causes water congestion inside the stomata and mesophyll cells of the plant tissue. Later, the pre-symptoms appear in the form of lesions on the foliage (Leaves), fruits, stems etc.

The conditions like rain, warm temperature and irrigation methods cause the bacteria to ooze out of the lesions onto the plant surface. Then post symptoms are generally identified by the formation of corky lesions with a yellow-brown halo around it. Likewise, the bacterial inoculum disseminates through various factors, and the disease cycle continues. 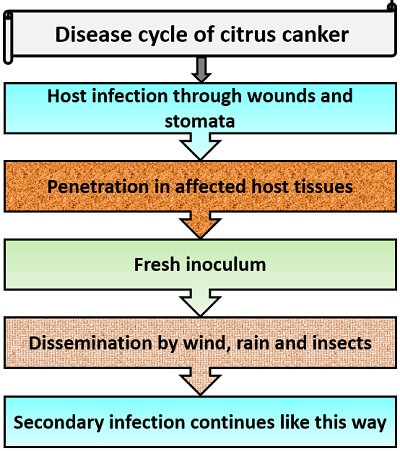 Therefore, the disease of citrus canker can be managed through all these control measures.