The rhizosphere is a term, which was first introduced by a scientist L.Hiltner. It is the region that is a few distances (2-80mm) extended from the root system. It can also define as a zone, which favours the physical and chemical activity of the microorganisms and responsible for the intense microbial activity.

The rate of microbial activity strongly influences the process of root exudation. The organic and inorganic wastes of the root system are called root exudates. Rhizosphere zone is the region of intense microbial activity, and it is isolated from the bulk soil that often called as Edaphosphere or Non-rhizosphere.

A rhizosphere is a region containing a tremendous amount of rhizodeposits that makes it the most desirable zone for the microbial proliferation. We can remind the term, by understanding a simple fact that is a sphere containing root secretions and diffusates which is in close vicinity to the rhizoplane or root surface.

In this context, we will look into the location of the rhizosphere, rhizospheric effect, microorganisms involved and their activity along with the fundamental process related to the rhizosphere, i.e. root exudation.

The term rhizosphere can define as the microzone of soil biota, which has a distance few millimetres away from the root system. It is the region where the plants and microbes coordinate with each other and can show the symbiotic relationship by fulfilling each other’s nutrient requirement. The size and structure of the rhizosphere zone vary depending upon different plant species and microflora present in it.

Structure of rhizosphere consists of three zones based on their proximity to the root system.

The whole process inside the rhizosphere zone is explained below in the diagram: 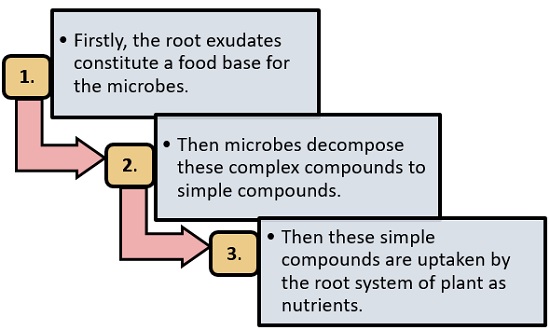 The reason for intensive microbial activity is due to the phenomena called Root exudation. During unfavourable conditions, the organic and inorganic compounds diffuse out of the root, such compounds are called Root exudates. Therefore, root exudates form a network between the plants and microorganisms. Root exudates basically include the root secretions and root diffusates.

Based on chemical nature, root exudates are of three types:

Rhizosphere shows huge microbial diversity, which includes (Bacteria, fungi, actinomycetes, algae and protozoa are the common microbes, whereas viruses, archaea, arthropods are very rare). Microorganisms can be classified into three types based on their effect: 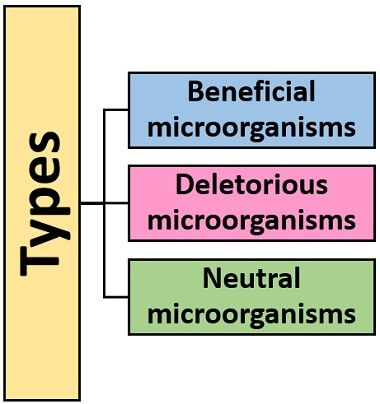 Table showing distinctive features of rhizosphere microorganisms is given below:

These all are the factors that influence the growth and the activity of the rhizosphere microorganisms directly or indirectly.