Alternaria fungi constitute a major group of plant pathogens. They belong to the phylum Deuteromycetes or Fungi imperfecti due to the lack of sexual stage in their life cycle. Thus, Alternaria species only reproduce asexually by conidiospores, and the process is called an anamorph state.

The genus Alternaria has nearly 299 species. They are ubiquitous. Alternaria species not only function as phytopathogens but also serve as common allergens that may infect humans as well as animals.

In humans and animals, the diseases or infections caused by Alternaria species are popularly known as Alternariosis and Alternariatoxicosis. This post mainly focuses on the classification, habitat, morphology, characteristics and reproduction cycle of the Alternaria.

They are cosmopolitan in the distribution or ubiquitous (found in soil, air and plant residues). Alternaria species exist as saprophytes, endophytes and pathogens.

We could study the structure of Alternaria fungi by knowing the features of the fungal mycelium, conidiophores and conidia. 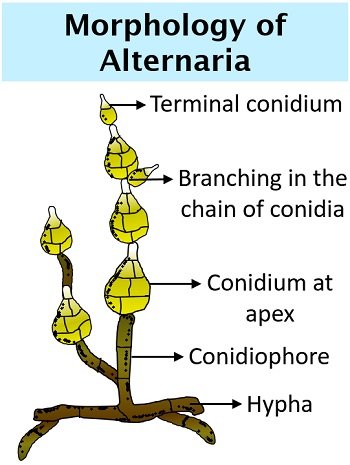 Conidiophores: They arise singly or in pairs and may appear long or short. Conidiophores of Alternaria species are geniculate with swollen apex. The colour of conidiophores usually ranges from pale olivaceous to olivaceous brown. We could visualize terminal scars under the microscope, which indicate a point of attachment of conidia. The length of conidiophores is 42.26 µm. The width is 4.29 µm.

Conidia: They exist in the form of chains. Ten or more conidia exist at each conidiophore tip. The conidia can be simple or branched. The shape of conidia can be obclavate, ellipsoidal and muriform. The conidial apex is tapered. Conidia possess 2-3 longitudinal septa and 2-10 transverse septa.

The spores produced by Alternaria species disseminate in the air and later fall on specific plant hosts. Spores start germinating by forming a short germ tube once they get enough moisture and a temperature between 31-35 degrees Celsius. The germ tube extends to form an erect and short conidiophore.

Mitosis division occurs in cells of conidiophores that develop reproductive structures (conidia) with a short beak. Conidia penetrate plant cells and invade all the nutrients by causing leaf necrosis and chlorosis. Besides leaf foliage, the spores of Alternaria fungi may also affect the fruit and lenticel. Infections are generally characterized by lesions, spots, blisters and rotting of leaves.

Therefore, we can conclude that species of the genus Alternaria only undergo the asexual saprophytic phase. They produce conidial spores in the form of a chain or in acropetal succession that detach during unfavourable conditions and live as a dormant spore until germination. In favourable conditions, conidia germinate by forming a germ tube.

Eventually, a short conidiophore develops that form a chain of conidia by undergoing mitosis. Thus, the reproductive cycle of the Alternaria species continues, and their free spores in the environment (air, soil, plant debris etc.) may infect the living system, including plants, animals and humans.