Phagocytosis is a method of endocytosis. It refers to the cellular mechanism where the invagination of the plasma membrane causes internalization of the extracellular contents into the cell in the form of vesicles.

Internalization is a process where a plasma membrane undergoes successive invagination to form membrane-bound vesicles, which later detach from the cell membrane and enter the cytoplasm. In phagocytosis, the internalized molecules are generally large particles (>0.5 mm in diameter).

Phagocytosis or cell eating endocytosis occurs in a particular or specialized type of cell. It is a type of active transport mechanism that makes the use of ATP.

The membrane-bound vesicles mediate the transportation of the extracellular biomolecules into the cell cytoplasm for further processing, degradation and recycling. In this post, we will discuss the definition, process and functional role of phagocytosis.

Phagocytosis or cell eating is one of the cellular mechanisms that facilitate endocytosis. This process internalizes the large particles by the specific binding between the host cell receptors and the ligands present on the cell surface of the target organism.

Phagocytosis was first reported by a scientist named Metchnikoff. Then, the plasma membrane invaginates to form a large endocytic vesicle or a phagosome. The diameter of the phagosome is greater than 250 nm. The process of phagocytosis is carried out by the phagocytes (specialized cells). 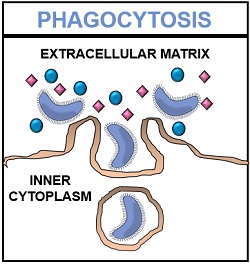 In mammalian cells, the process of phagocytosis is achieved by macrophages, neutrophils, dendritic cells and monocytes. It forms the second line of defence. A phagocytic cell comprises intracellular compartments, i.e. lysosomes that contain microbicidal substances and hydrolytic enzymes like lipases, proteases, nucleases etc.

The method of phagocytosis involves the following endocytic pathway:

A macrophage comprises discrete receptors that help in the identification of the target organism. There are pattern recognition receptors (PRRs) on the cell surface of phagocytes, which recognize the pathogen. The phagocytic receptors can be non-opsonic or opsonic.

Non-opsonic receptors can recognize the molecular groups on the phagocytic targets and most commonly include CD169, CD33, Dectin-1 receptor molecules, etc. Opsonic receptors identify the host-derived opsonins, which attach to the target cell and include FcR, CR receptors etc. 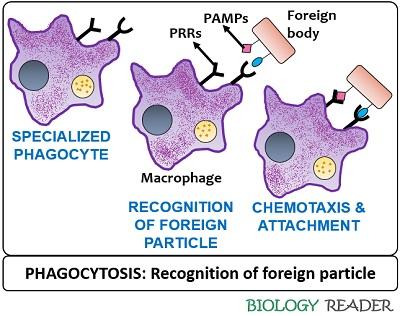 After recognising the target cell, the phagocytic receptors form a signalling cascade that eventually deforms the lipid content of the cell membrane and regulates the actin cytoskeleton. The deformation results in the extension of the bilayer cell membrane to capture the foreign particle.

Thus, when a phagocyte encounters a specific antigen, the plasma membrane invaginates to enclose the foreign particle and go through a series of sequential events to form a large sac-like structure. 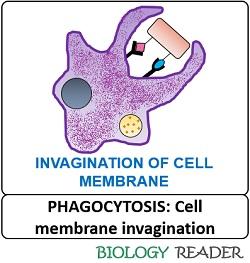 The binding of a host cell and target cell receptor molecules form a phagocytic cup by remodelling the actin cytoskeleton. The phagocytic cup will expand slowly to enclose the target molecule and finally close its distal end to form a sac-like structure or “Phagosome”. Later, the vesicle pinches off into the cytoplasm and forms an intermediary phagosome. 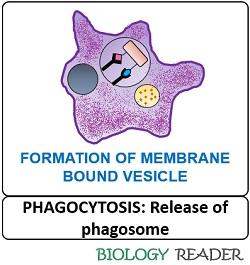 A phagocyte comprises small intracellular or endocytic compartments, i.e. lysosomes, which tend to fuse with the large phagosome. The fusion between an intermediary phagosome and lysosome results in forming a large, mature, acidic, and microbicidal vesicle known as phagolysosome. The granules of lysosomes change the membrane and interior characteristics by the progressive acidification of the intermediary phagosome. 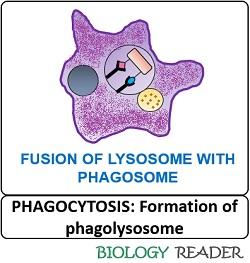 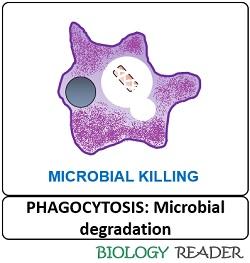 The remaining undigested material inside a sac is called “Residual body”. Finally, the undigested debris exits the cell after the fusion between a residual body and the cell membrane. 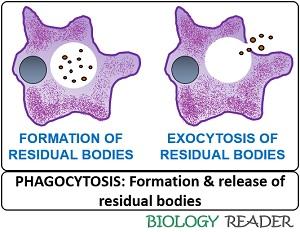 Phagocytosis is a complex cellular mechanism, which aids in the ingestion and egestion of microbial elements and apoptotic cells. The process of cell eating also plays a significant role in tissue homeostasis and immune defence.