Urease test is an analytical method practised to identify the urease positive and negative organisms based on the production of cytosolic urease enzyme. It distinguishes the Proteus species from the non-lactose fermenting members belonging to the Enterobacteriaceae family.

Urease test comes into use to check whether the microorganism can produce “Urease” or not. It involves the splitting of urea into end products like alkaline ammonia and carbon dioxide by the addition of water.

Urease test is a biochemical method that demarcates the difference between rapid positive, slow positive and negative urease test organisms based on the existence of the urease enzyme. Urease catalyses the hydrolysis of urea into ammonia and carbon dioxide. The urease test results are characterized by any colour change in the pH indicator (phenol red).

Urea is an acidic compound, which on hydrolysis produces an alkaline by-product, namely ammonia. Therefore, the colour change of the pH indicator is due to the formation of ammonia (end product).

Before discussing the theory of the urease test, let us study some important terms that we must have an idea of.

It refers to urease aminohydrolase, which exists as a cytosolic enzyme that breaks urea into the by-products (carbon dioxide and ammonia). It functions as a nitrogen metabolizer, as it degrades the chief nitrogenous product “Urea”. Urease is a nickel-containing metalloenzyme.

It exists in archaea, bacteria, unicellular eukaryotes etc. and a member of the aminohydrolases and phosphodiesterases superfamily. Urease is dependent on the substrates like urea and hydroxyurea. Its reactivity may alter from species to species.

It refers to a chief nitrogenous end product formed by the decarboxylation of protein subunits (amino acids). Urea is a diamide of carbonic acid. It is a chemical compound that comprises two –NH2 groups connected via the carbonyl (C=O) functional group.

A scientist named Christensen formulated urea agar in the year 1946, due to which the media is named after the name of the scientist. It contains a urea base and a pH indicator (phenol red).

The mechanism of the urease test depends on the hydrolysis reaction catalyzed by the urease enzyme. Ureases split or hydrolyze the nitrogenous compound (urea) into the by-products like ammonia and carbon dioxide.

The organisms capable of hydrolyzing acidic urea (Proteus sp, Providencia sp etc.) can produce a sufficient amount of basic ammonia and a gaseous end-product carbon dioxide. The ammonia further protonates into ammonium and hydroxyl ions that cause alkalinity in the media.

Few organisms like Klebsiella and Enterobacter species can change the pH and the media’s colour but generally give delayed results by slowing metabolizing the urea. Oppositely, some microorganisms like Escherichia coli lacks a urease enzyme, due to which they are incapable of splitting urea.

Preparation: To prepare urea broth, accurately weigh the above ingredients of Stuart’s media and add 1000 ml of distilled water. Filter sterilize the solution with the filter paper having a pore size of 0.45 mm. After that, autoclave the broth medium at 121 degrees Celsius for 15-20 minutes.

Preparation: To prepare a urea agar slant, accurately weigh the above six contents of Christensen’s media and add 100 ml of distilled water. Filter sterilize the urea-based solution and 100ml of distilled water through the filter paper having 0.45 mm porosity.

Take 20 grams of agar media into the sterile flask and autoclave it at 121 degrees Celsius for 15-20 minutes. Allow the agar media to stand for a while until it reaches 50-55 degrees Celsius. Afterwards, aseptically transfer the 100 ml of a solution containing urea base into it.

Thoroughly mix the contents by shaking the flask back and forth. Then, add 3-4 ml of the media into the sterile tubes and keep them in an inverted position until it solidifies. After solidification, store the test tubes at 4-8 degrees Celsius under refrigeration.

The protocol of the urease test includes the following steps: 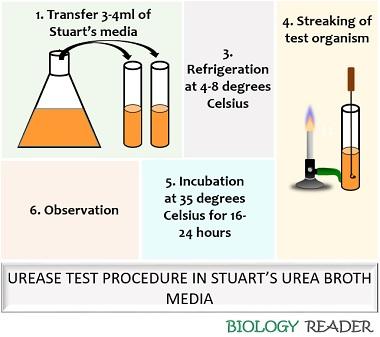 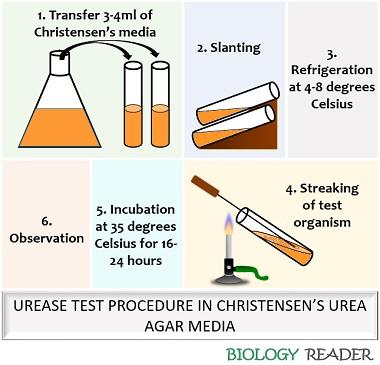 The urease test results in Christensen’s urea agar and Stuart’s urea broth media can be concluded simultaneously by the given result interpretations. 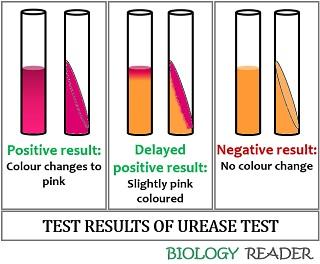