A most probable number method is practised for the qualitative and quantitative water to determine microorganisms’ presence (mainly coliforms). “MPN” is an acronym for most probable number. Multiple tube fermentation test or MPN method determines the quality of water by quantifying the number of coliforms in 100 ml of the water sample.

Formation of gas bubbles in an inverted Durham tube indicates the production of gas in the fermentation tube. A most probable number is extensively used to estimate or determine the number of microorganisms from the large samples like water, soil etc. MPN test detects the presence or absence of faecal coliforms, which can cause faecal contamination in water and making it unsafe for human consumption.

Therefore, the quality testing of water becomes necessary to know the concentration of microorganisms or water quality, i.e. whether water is potable or not. In this lesson, we will discuss the definition. principle, methods, advantages and disadvantages of the most probable number test.

Principle of Most Probable Number

Method of Most Probable Number

The preliminary or screening test uses a series of fermentation tube containing lactose broth of known concentration. The negative presumptive analysis indicates that the water is microbiologically safe and does not require further testing. But in the case of positive results, one needs to confirm the presence of coliforms through the confirmed MPN-test. 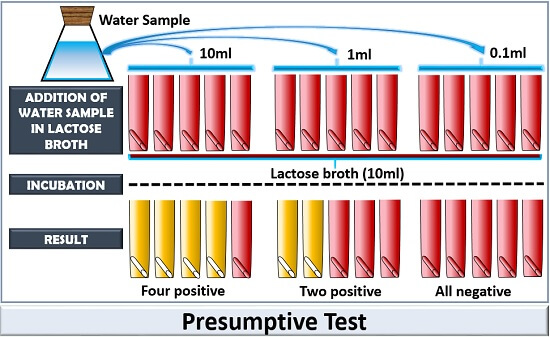 Observation: After incubation, the results are made based on any colour change or gas production in the MacConkey broth.

Some yeasts and Clostridium species are present in the water, which can ferment lactose by producing both acid and gas. Therefore, it becomes necessary to confirm the presence of coliform in water. A confirmed test can be performed usually in two ways: 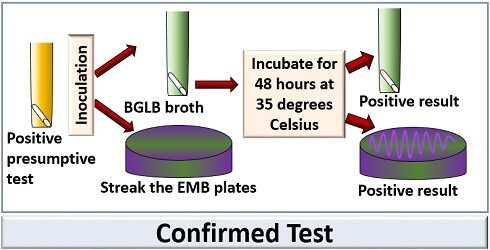 Observation: Observe the test tubes containing BGLB medium and inoculum of positive presumptive test for the production of gas in the inverted Durham tube.

Result interpretation: The production of gas in the BGLB medium indicates the presence of coliforms

Observation: Observe the plates for the appearance of bacterial colonies on the EMB media. Generally, three types of colony develops:

Result interpretation: The production of a typical colony indicates the presence of coliform bacteria.

It is the final test to ascertain the presence of coliforms. A completed test involves the following steps: 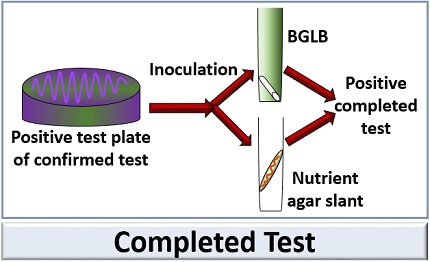 Observation: Observe the test tubes for gas production in BGLB medium or the growth of a bacterial colony in the agar slants.

In the MPN method, a number of tubes showing positive results will estimate the coliform count per 100ml. The numbers are compared with the statistical data that Maccardy gave.